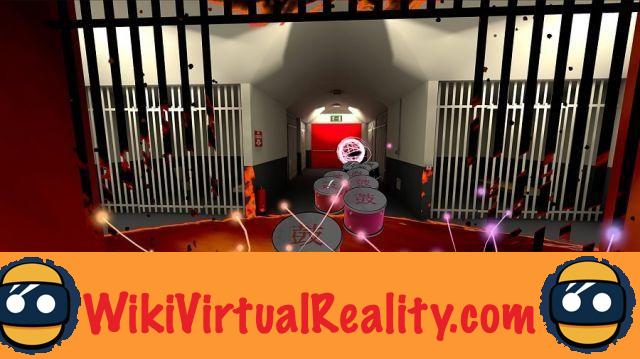 Virtual reality rhythm games are about to welcome a somewhat turbulent newcomer. No more electronic music and cardio sessions at 128 BPM and make way for rock. Indeed, Smash Drums offers players to do of the battery in VR. This should please lovers of crash cymbals and double pedals. They should find a good way to let off steam.

The future musical game should be available on Oculus Quest and Rift headsets at its output. This is also scheduled for the beginning of 2021 without much more details. Smash Drums is developed by a French who took as nickname Mr Potam. As reported on his Twitter feed, he participated in the Oculus Start program which helps promising VR developers.

Taking up a well-established concept of musical play, it is a question of intercepting at the right time objects which move in rhythm towards the player. Here no arrows or cubes to cut, but drum toms and cymbals. It makes perfect sense! So you just have to hit it with your virtual sticks to play the rhythm part of a rock song. Smash Drums will feature 15 indie band titles (Indie Rock) to begin with. Its developer plans the arrival of other tracks in the form of free DLC.

Smash Drums will be accessible to experts and beginners alike

To perfectly stick to the rock universe, the decor of the game levels is gradually falling apart as the song progresses. Smash Drums is therefore not content with just music, but also highlights the "destructive" side of rock.

According to the official website of the game, the different tracks have been tested by experienced drummers as well as by beginners. So it's not just for fans of Mike Portnoy or Dennis Chambers. On the other hand, it will be possible tocompete against other players all over the world to try to get the best score. This should unlock new skins for drum parts and wands.


If it is necessary for the moment to be satisfied with a few videos, a playable demo is scheduled for mid-August. She will land on SideQuest for Oculus Quest. We therefore advise you to keep an eye on the Smash Drums Twitter feed for more information.

Tutorial: How to use SteamVR with Oculus Rift and Windows Mixed Reality ❯