On January 6, in Las Vegas, Sony surprised many observers. If the announcements on the next products of the Japanese brand did not fail to delight those present for the CES, a question remained on all the lips of the participants: What about du prix du Platstaion VR, the virtual reality headset from Sony, planned for this year?

Playstation VR price: an affordable price to compete with Oculus?

Two Swiss sites selling technological equipment online, Brack.ch and Techmania, have however decided to stop all suspense on the subject and relieve countless gamers of their anxieties by selling the wick: According to Brack.ch, we therefore find on the proposed offer a Playstation VR to 499 Swiss francs (456 euros) while Techmania sells the virtual reality headset around 552 Swiss francs (504 euros). 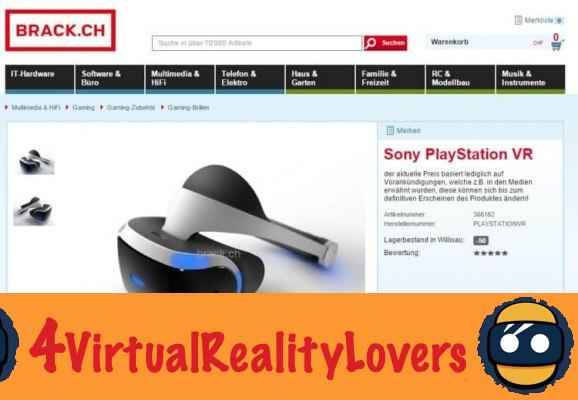 This information, not yet confirmed by Sony, should be able to visualize the total price to obtain and enjoy the joys of virtual reality at home. Works with the Playstation 4, the price of which ranges between 350 and 400 euros, VR should allow access to virtual reality much less expensive than promised by Oculus and its Rift model which requires a computer close to a NASA supercomputer to run it.

Playstation VR price, a Sony strategy to compete with the company bought by Facebook?

Pending confirmation of the award by the Japanese multinational, Palmer Luckey, founder ofOculus, did not wish to wait for the kick-off to directly tackle the Playstation VR that he plans to be “and to be only than a cheap alternative to access virtual reality, while the helmet ofOculus would be intended for advanced players.


As you can see, the virtual reality war has indeed started, and it is not likely to end anytime soon!

Find out how to attend live VR concerts! ❯