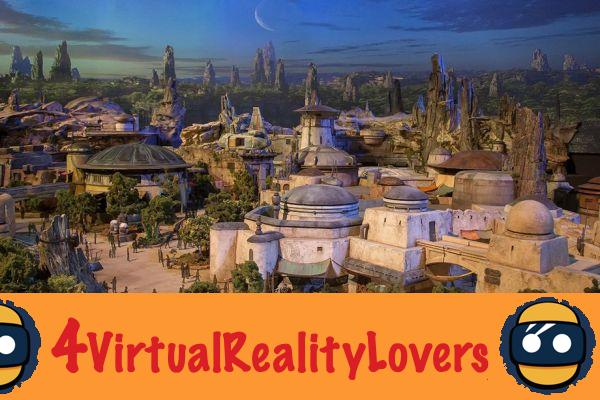 Two years ago, Disney announced its intention to open a new amusement park inspired by the universe of Star Wars, using the latest technologies to offer a completely new experience to visitors. Today, the American entertainment giant is finally unveiling the first visual renderings of its revolutionary project. The 3D models feature varied landscapes, ranging from barren terrain to lush forests reminiscent of the planet Endor from Return of the Jedi. There is also a metal cantina.

Along with these first images, Disney has revealed more details about the project. According to the firm, Star Wars Land will take visitors to a new planet never seen before in the Star Wars universe, described as an intergalactic trading port, on the border of "Wild Space".

As promised in 2015, Star Wars Land will offer a fully immersive experience, allowing visitors to evolve within the Star Wars universe and interact with characters who will behave differently depending on each person's actions.. The park will offer two main attractions. In the first attraction, the player will be able to pilot the legendary Millennium Falcon as part of a secret mission. The second attraction will feature taking part in an epic battle between the First Order and the Resistance.

- visitors will have the freedom to choose between the Resistance and the First Order, between the light side and the dark side of the Force. Iconic characters from the series like Chewbacca, BB-8 and Kylo Ren will be in attendance. It is likely that this border planet, bearing the name Galaxy's Edge, will be featured in future episodes of the Star Wars trilogy, although no official statement has been made on this matter.

Along with Galaxy's Edge, Star Wars Land will host a brand new resort. Within the hotel, cosmic images will be projected on the windows to give a bluffing illusion that the adventure is really taking place in space. Upon arrival, the visitor will have to don a costume inspired by Star Wars to immerse themselves in the atmosphere. As in the famous Westworld series, he will be able to take part in various adventures throughout his stay. In short, within Star Wars Land, the immersion never stops. Cutting-edge technologies such as artificial intelligence, virtual reality and augmented reality will be fully exploited to offer a journey into the Star Wars universe, but also into the future of our Blue Planet. Remember that Disney is preparing an augmented reality headset.

Star Wars Land Park will open in 2019 at Disneyland Anaheim and Disney World in Orland. According to the US site Bloomberg, these two Star Wars Land parks will cost Disney a colossal sum of $ 1 billion each. An investment that will undoubtedly pay off quickly by the massive and continuous waves of hordes of Star Wars fans. Bob Chapek specifies that this is the most ambitious park ever built by Disney.

Game of Thrones: Westeros at your feet ❯