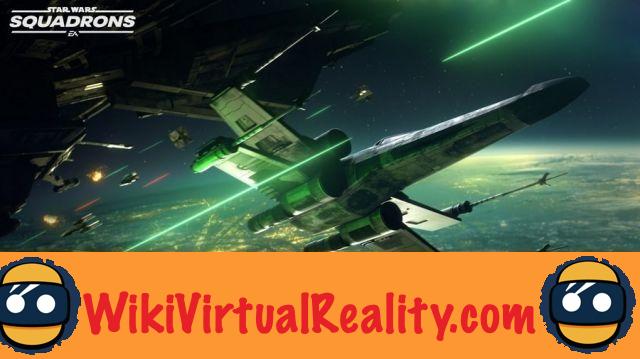 Star Wars: Squadrons first leaked last week before being made official by EA. The editor takes the opportunity to show the game with a trailer. Players will take on the role of pilots from the New Republic or the Empire and will engage in clashes among the stars. The official game page claims that many ships, star hunters, will be available. This should make it possible to pilot the classic X-Wing and Tie Fighter, but also A-Wings or Tie Interceptors.

Star Wars: Squadrons proposera a single player game mode, without giving more details on this adventure for the moment, except that it takes place after the events of Return of the Jedi. On the other hand, the title should also give pride of place in multiplayer. Indeed, space battles will be skirmishes between several squadrons (as the title suggests, Squadrons). These battles may pit up to ten players, divided into two teams of five. The site specifies that thanks au cross-play, the different supports can be found in the same part.

Importantly, Star Wars: Squadrons will be fully playable in virtual reality. The game is announced for PSVR and PC VR. However, there is currently no mention of compatible headsets. Although we can imagine that the main ones allow you to play it (which seems to be the case according to the game's Steam page). So this is a new VR experience in the Star Wars universe, even if this time around it looks more like an overlay.

The game is now available for pre-order on the official website. The exit is scheduled for October 2, and Steam shows him a price of 39,99 euros.


EA is planning a live session to show off the gameplay. It happens Friday June 19 at 1 a.m., for the night owls.

add a comment of Star Wars: Squadrons will be fully playable in VR