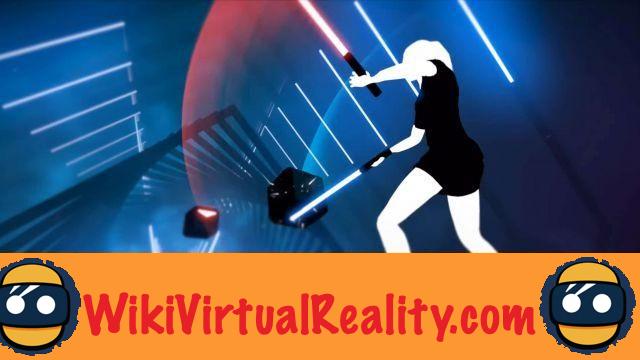 Launched on Steam in Early Access May 2018, Beat Saber quickly won the hearts of VR headset users. This game, which skilfully mixes and, offers players to cut blocks using a lightsaber in rhythm to the music. A simple concept, but devilishly effective.

During the few days that followed its release, Beat Saber even managed to climb to the top of the Steam rankings all categories combined as the only game to accumulate 99% positive reviews. However, a few negative reviews then lowered the percentage of positive reviews to 98%.

Today, with 5761 with positives and 55 negatives, Beat Saber is one of only 19 Steam games to enjoy a 98% score. More precisely, the title climbs to seventh position in all categories.

Beat Saber could become number 1 on the Steam ranking

To achieve sixth place in the ranking of the best rated games on Steam, Beat Saber will have to surpass the title ”” of 2017 and its 7689 positive reviews. The challenge is great, but it is not insurmountable.

Recall that Beat Saber is still in Early Access. According to developer Beat Games, the final version will bring some highly anticipated new features such as a greater number of official tracks, an official track editor, and above all a multiplayer mode.

These improvements should allow the game to unite even more fans. Besides, if Beat Saber manages to accumulate 5439 additional positive opinions without collecting a negative opinion, he will be able to return to a percentage of 99% positive opinions and resume first place in the Steam ranking.

When it comes to VR games, the game continues to occupy the top spot on the Steam top. Beat Saber is also The best and most rated game on the Oculus Store, with a score of 4,8 out of 5 from 1732 reviews. In May 2018, developer Beat Games announced 100000 sales in one month. As of October 2018, SteamSpy estimates that the number of copies sold on Steam is between 200000 and 500000. If so, Beat Saber is one of the best-selling VR games so far.

add a comment of Steam: Beat Saber VR is 7th highest rated game of all time