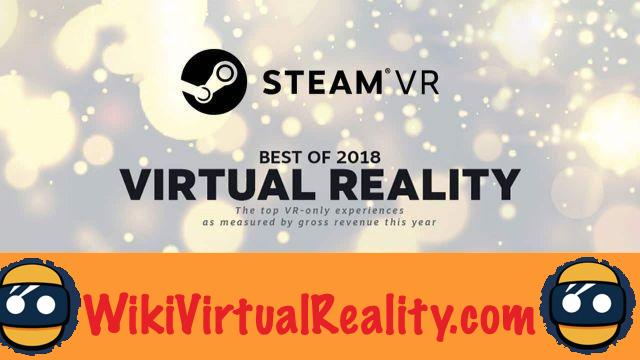 New Year's Eve is fast approaching, and the time has come to take stock of 2018. In this context, Valve has just unveiled the list of the 100 best-selling VR games on its famous Steam platform during the year that is ending.

La list is separated into four categories: Bronze, Silver, Gold and Platinum. However, within each category the games are organized randomly. It is therefore not possible to define a true top 100 best-selling VR games from this list. The bottom line is that the games of the upper thirds generated more revenue than those of the lower tiers.

In the Platinum category, we find of course the famous Beat Saber which had sold more than 100 copies in one month after its launch. Among the best-selling games, there are also well-installed references such as the MMO RPG. Despite mixed reviews (000% positive reviews), climbs to third platinum thanks to the popularity of the franchise.

Note also the presence of the game who joined the Platinum tier for the second consecutive year. This title is doing well since it was launched in 2016. In addition, with 97% positive opinions, we can say that the game is unanimous among players.

The real surprise of the Platinum third is adult game , which entered the top of the basket despite its limited audience and its price of 50 euros. As a reminder, Steam has decided to sell X-rated games since June 2018 in the name of freedom.

In the Gold category, we find and.


In le tier Silver, there are two games. For all the games from the Silver and Bronze third parties, check out the full list of the 100 best-selling VR games of 2018 on Steam.

#VRBreak: a look back at the first aperitif for virtual reality professionals ❯