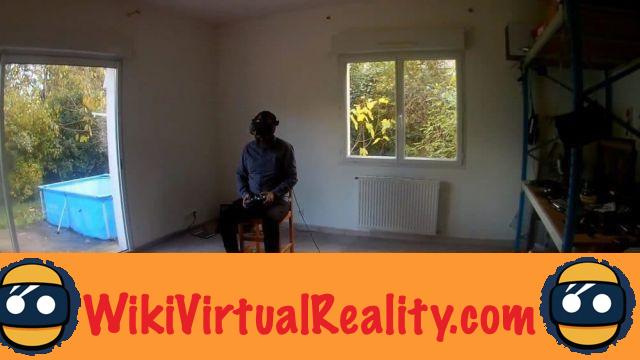 By immersing yourself in virtual reality, many people quickly experience nausea. This phenomenon, called "Motion Sickness", occurs when the player's avatar moves in VR while their body is not moving in reality. This paradox disrupts the brain, and causes "motion sickness" comparable to motion sickness experienced by some people when traveling by car.

Many companies are looking to tackle Motion Sickness, to allow more freedom in VR. A few days ago, OtoTech presented a vibrating headband to fight nausea by flooding the inner ear with white noise. Today, It's the turn of the startup Steppingstone VR to unveil an even more original solution.

The firm is working on a moving platform using electromagnetic propulsion to move the player while playing standing or sitting. A bit like the bumper cars at fairgrounds, the platform is supplied with energy by specialized soil. This allows it to adapt and move quickly according to commands entered by the player in the VR. In theory, this sensation of physical movement felt by the player should help combat nausea in games offering free movement like Skyrim VR or Fallout 4 VR.

Steppingstone VR: the platform that moves the user in the real world while they move in VR

Currently, the device is still at the prototype stage. According to the CEO of the company, Samy Bensmida, the commercial version of the product will bring together several platforms on which the player can move. The slabs will move backwards as the player walks, thus allowing to walk in the VR while remaining in place in the real world. This is reminiscent of the patent filed by Google for shoes with wheels capable of bringing the player back to the center of his playing space.


The product description suggests an extremely expensive system to reserve for VR arcades and businesses. Surprisingly, the company promises that its system will be designed for individual home use, and that it will be affordable enough for individuals to install it in their homes.


Caring for crowdfunding campaign will be launched very soon on Kickstarter by Steppingstone VR, with a goal of around $ 150. It is not known when the product will be marketed.

Apple's AR glasses in the works… for over twenty years!

The Oculus Rift, the VR asset for exhibitors at the Paris Motor Show

Sixense: the very 1st VR 6DoF controller is canceled, after 5 years of delay