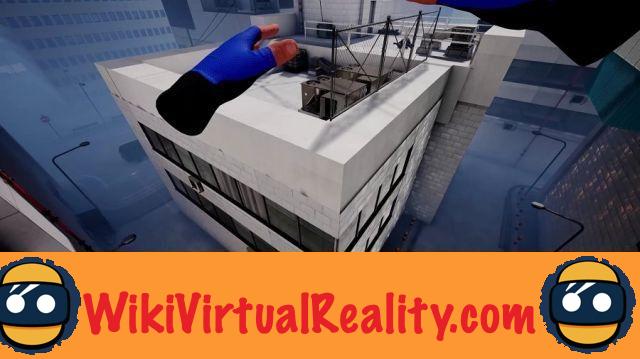 The discipline of parkour has its representative on computers with Mirror's' Edge. Virtual reality will soon welcome its double with Stride. And the comparison doesn't stop there. However, a first glimpse of the next VR title puts an emphasis on the similarities between these two games. Indeed, whether in terms of general design, blue-gray tone with its orange touches or the approach to gameplay with phases of armed or unarmed combat, Stride is inspired a lot by its predecessor. DICE and Electronic Arts do not seem to have anything to do with this project, however.

Parkour is a genre that is rarely represented in virtual reality. Perhaps because a discipline based so much on movement is difficult to reproduce. All the more for someone who cannot imitate these movements. And for once, the effect of motion sickness could unfortunately be particularly pronounced here. On the game's official Steam page, the Joy Wave studio developer team assure that it will not be the case.

We hope so, because the experience Stride intends to offer looks exhilarating. The sensations of vertigo in VR are very real. So, jump from one building to another, catch up at the last moment, climbing gutters, all this must provoke an incomparable feeling of freedom.

Stride directs a hero in a quarantined city after an incident that occurred 15 years earlier. Rival gangs are waging a raging war to control the meager resources available, and they have taken over the roofs of buildings. To help the rest of the population caught in the crossfire, someone must stand up to put an end to this tyranny. The game is expected on Steam for this summer and will be compatible with PC VR headsets.

Virtual and augmented reality are disrupting architecture and construction ❯

add a comment of Stride is a Mirror's Edge VR clone