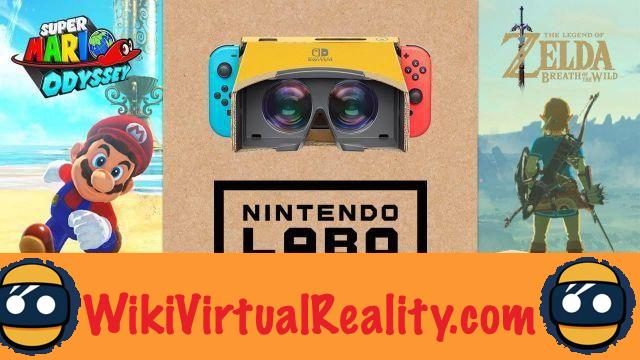 Almost 130 years after its founding, Nintendo has lost none of its ability to surprise its fans when they least expect it. Without warning, the Japanese firm has just announced on Twitter that it will be possible to play Super Mario Odyssey and Zelda Breath of the Wild for Nintendo Switch in virtual reality with the VR Labo Kit.

As a reminder, the VR Labo Kit was announced in March 2019. It is a cardboard virtual reality headset to assemble yourself for the Nintendo Switch. Until now, Nintendo had been content to announce six small games and 64 mini experiences compatible with this VR headset intended for the youngest.

We thought that these games, supplied with the kit, would be the only content offered. It will not be. The two biggest successes of the Switch, Super Mario Odyssey et Zelda Breath of the Wild, will also be compatible with the VR Labo Kit.

For the first time, two legendary Nintendo franchises will therefore be adapted in virtual reality. This is probably just a start, and hopefully future Switch flagship titles will be compatible as well. If you are a fan of the Big N, it is very likely that you are currently having chills while reading these lines ...

In the case of Zelda Breath of the Wild, the game will be fully playable in virtual reality. Only cutscenes will not be ported to VR. It will be possible to deactivate VR mode at any time during the game.


Regarding Super Mario Odyssey, it will not be a complete port, but a new experience designed for virtual reality. This VR mode will bring together three "mini-missions".

The VR Labo Kit will be available from April 12, 2019. The Starter Kit with the helmet and a single accessory is offered for € 34,99, and the complete kit including all accessories for € 69,99. The Super Mario Odyssey and Zelda Breath of the Wild games, meanwhile, will be VR compatible from April 25, 2019 following a free update. If you haven't already done so, hurry up to pre-order your kit which may sell (too) well following this new announcement ...

add a comment of Surprise! Nintendo announces VR mode for Zelda and Mario on Switch