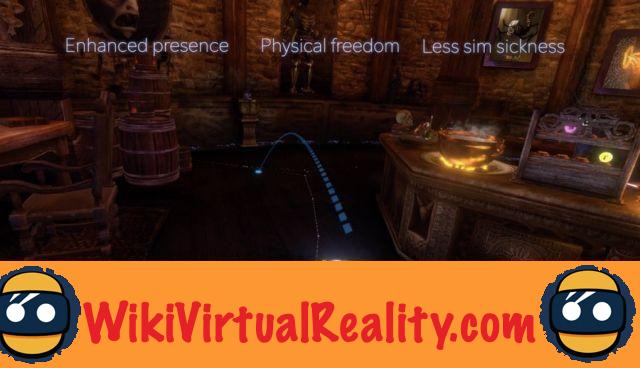 The Aldin Dynamics studio has developed a virtual reality movement system. Called Telepath, it intends to offer movements that are closer to reality and that do not cause a feeling of nausea. Implemented in their game Waltz of the Wizard for some time, the developers claim that 90% of gamers use it regularly.

Also, they explain that they have only revealed a small part of the capabilities of this system. That's why Aldin has announced the upcoming release of an expansion for their VR magic practice game. To prepare it are delivered new Telepath capabilities, including hand tracking which will arrive later on the Oculus Quest.

Thus, in a post on their blog, the studio details the new functions that accompany the update of Telepath. Their goal is to make the general experience more pleasant, that is to say more flexible and natural. To do this, they focused on two points: adopting natural behavior prompted by real movements in the real reproduced in virtual, and reducing the effects of motion sickness. In order to achieve this, Telepath relies on three functionalities.

First of all, there's what the Aldin studio calls Presence Control. Instead of using buttons to indicate an action, the system analyzes the user's intention through their movements. It then adapts to body language and accentuates the immersion effect. Then, le mode Smooth Motion (or fluid motion) allows full moves that show the entire transition from the start point to the end point. Finally, Arc Roll adds a "twist" to the traditional teleportation mode. It is indeed possible to bend its trajectory with. This should give more precision by means of locomotion.


These new functions are available now. Now the Aldin studio looks forward to the return of the players, good or bad, in order to prioritize what is not yet developed. The developers have also warned that the current system is not perfect, but constantly evolving. So this is also a testing period for Telepath, pending the release on Quest a little later, with the presence of hand tracking. It is necessary for that wait for Oculus to officially make this function available.

Pokémon Go: all you need to know about Legendary Lunch Time ❯

Synth Riders will land on the Oculus Quest on October 31

Beat Saber: the best tips to improve your score

Add a comment from Telepath, the new hand tracking system for Oculus Quest