Who has never played a platform game? Great classics like or have been for many of us a gateway to the world of video games. Even today, the genre continues to renew itself with innovative titles like, or.

However, until now, this genre has only been very little explored by VR game developers. The overwhelming majority of VR games are first-person titles, which may indeed seem logical. Yet immersive technologies open up new gameplay possibilities for platform games. Today, Sony demonstrates it in a big way.

Le Astro Bot Rescue Mission scenario fits on a piece of paper. As the little robots (taken from the Playroom game on PSVR) are quietly enjoying themselves on their spaceship, a malicious alien suddenly appears. By destroying the machine, he scattered at the same time the merry swashbucklers throughout the universe. Of the 160 robots that make up the crew, only one remains: Captain Astro.

The unfortunate creature will go in search of find all his friends and repair the ship piece by piece. It's a long-term quest, but Captain Astro can count on your help to make it happen.

Voluntarily minimalist, this scenario allows leave room for pure action and also leaves more freedom to developers in terms of level design or even gameplay. An opportunity seized with brio, as we will see later.

Gameplay of Astro Bot Rescue Mission: the platform game in the era of VR

After this short introductory sequence, the game begins. In Astro Bot Rescue Mission, the player controls the character in third person view. Using his Dualshock 4 controller, he must steer the robot and help it jump from platform to platform or hit enemies to get rid of it.

However, unlike a classic platform game, the player does not directly embody the character. Like an omnipotent ally who overlooks the scenery, he must also interact directly to help Captain Astro. For example, this will involve destroying obstacles by giving head shots, or catapulting the robot with precision at the end of the level.

In addition, in most levels the player unlocks a gadget that transforms its controller grapple, hydrojet, shuriken launcher or machine gun. These tools will need to be used in first person view to help the character progress. For example, grappling hooks can be used to create bridges, while shurikens can help clear the way or decimate enemies.

Ce mix of genres is very interesting and above all very well exploited. Likewise, in order to properly identify the different passages and to understand the architecture of the level, it is necessary to observe everything around you. You bend down to check if the bottom of a precipice is hiding a secret, you turn to follow a path that looms behind you, you stick your head behind a wall to make sure there is no enemy in ambush ...

Throughout the adventure, the player must both follow his character and pay attention to the environment. Moreover, some enemies attack the player directly, throwing bombs or spraying him with ink. It is therefore necessary to dodge the projectiles by moving the head reactively.

Astro Bot gameplay is smart, very well implemented, fun, and addicting. In addition, the level design of the different levels is masterful. While playing this game, there is no doubt that the developers who created it are as talented as they are experienced.

In total, the Astro Bot Rescue Mission adventure extends overr five worlds each composed of five levels. In each level there are eight robots to save. Some are obvious to find, others are much better hidden. However, their calls for help make it possible to locate them thanks to the 3D spatialization of sound offered by the PSVR.

In addition, in each level hides a space chameleon. Each chameleon allows you to unlock a bonus challenge. It will be for example a mini-game or a race against the clock to finish a level as quickly as possible.

It is possible to complete the levels without finding all the robots and the hidden chameleon, but everything must be found to complete the game 100%. specify that each world is punctuated by a daunting fight against a gigantic boss.

Another element that comes to extend the lifespan is the store, unlocked after the first world, in which he is possible to spend coins to unlock toys. In summary, the game is relatively short (especially considering the price), but the various hidden elements will keep you going for a while.

In terms of difficulty, the bar is not set very high. Astro bot remains a game for the whole family, and therefore does not want to be excessively punitive. Frequent checkpoints avoid having to start all over again if you fail, especially in the early stages. The difficulty gradually increases, and the last levels are a bit tough. Nothing insurmountable, however. 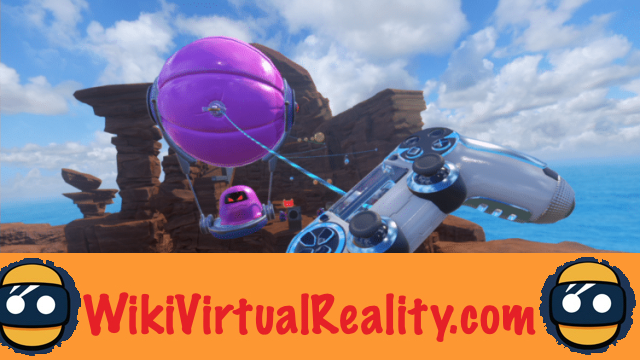 For a PSVR game, Astro Bot Rescue Mission offers impressive graphics. Compared to other games available on the platform, the pixels are barely visible and the whole is very detailed. The lighting effects are also very successful.

However, it is in terms of artistic direction that Astro Bot Rescue Mission really stands out. The graphics are colorful, shimmering, and it is a real pleasure to walk the different levels. Each of them offers a different atmosphere, and the pleasure is renewed each time.

La soundtrack is also very nice, and brings together a large number of different musical genres. The different themes accompany the atmosphere of the levels.

At first glance, you might expect Astro Bot to be less immersive than a first-person VR game. However, by continually seeking the player's attention, the title manages to be immersive despite the third person view.

Apostrophized by the character, targeted by enemies, the player is far from being a mere spectator. The feeling of immersion is also enhanced by the elements of first person gameplay and the level of visual detail of this imaginary and colorful world.

The title turns out to be quite comfortable, in the sense that you will not feel nausea due to Motion Sickness. In this sense, the third person view is a real plus.

However, after a little over an hour of playing, you might start to experience some visual discomfort. It is therefore important to remember to take breaks regularly. 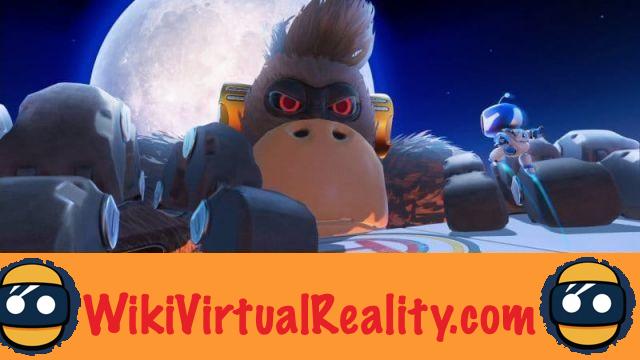 Astro Bot Rescue Mission isn't the first VR platform game. From the launch of the Oculus Rift in March 2016, the game Lucky's Tale laid the foundations of the genre. Likewise, more recently, the game Moss for PSVR has received critical and gamer acclaim.

However, Astro Bot goes even further by offering truly innovative gameplay ideas and exploiting all the possibilities offered by VR. With this game, Sony is not experimenting. The game turns out to be successful, complete, and really convincing. 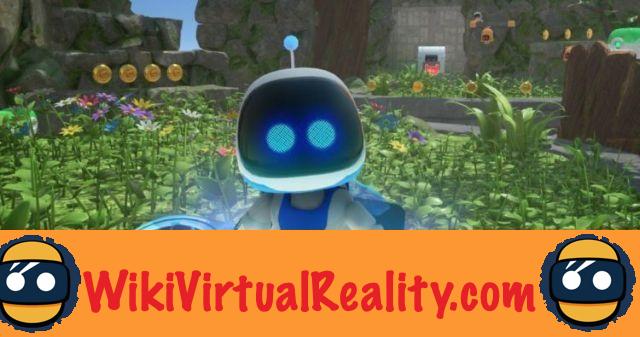 Astro Bot Rescue Mission is a game offering intelligent and original gameplay. The careful production, excellent both technically and artistically, reinforces this solid base. As a result a very successful game, which will delight young and old alike.

With gaming, Sony also manages to prove that the platform is a genre that has quite its place in virtual reality. At the end of this test, we are eager to see the arrival of other VR games of the same genre offering even more content and innovative ideas. With Astro Bot Rescue Mission, the platform game in VR holds its letters of nobility.

Scenario: A minimalist scenario that leaves room for pure action.

Lifetime : A somewhat short life despite the secrets to unlock.

Graphics and soundtrack: Colorful, neat and cute graphics all full.

Immersion: Despite the third-person view, Sony manages to deliver an immersive experience.

[TEST] Medal of Honor: Above and Beyond: a mixed success ❯

Traffic Jams: a fun game to manage traffic at a busy intersection