Created in 1995 by Klaus Teuber, is a board game known around the world. This board game owes its success to its skillful blend of simplicity and tactical depth. It is possible to play with the whole family, but the finest strategists will be able to confront their intelligences during games between experts. In addition, the game is very user-friendly and encourages players to communicate and interact.

Due to its many qualities, quickly became one of the most popular board games. Unsurprisingly, it has benefited from many extensions and has also benefited from an adaptation in video games on PC and more recently on smartphone. At the beginning of 2018, the game was adapted into virtual reality by the Experiment 7 studio. So, Does this VR version manage to transcribe the spirit of the original board game ?


Catan VR scenario: play as a settler thirsty for conquest 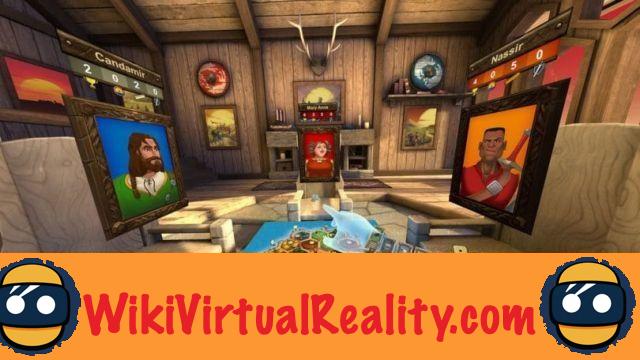 Just like the original board game, Catan VR invites you to play as a colonist. Your objective is to install your settlements on the map in order to expand your territory. To do this, you must collect and trade resources with your rivals to be able to build settlements and towns.

The game does not offer a storyline to speak of, but the illustrations of the game board and maps are good enough to immerse the player in this special atmosphere. In this VR version, the different avatars embodied by the players, the sound effects, the music and the animations also contribute to reinforce the atmosphere.

Catan VR gameplay: when VR solves the problem of board games

- Catan VR game rules are exactly the same as the board game original. Each player must collect resources in order to build roads, villages and towns on the game board and develop an army. Each of these constructions is worth victory points, and the player who reaches ten victory points first wins the game.

- players build their colonies and cities around the different squares on the board. The boxes represent different sources of resources: the forest produces wood, the field generates wheat, the meadow sheep… and each box corresponds to a number. At the start of his turn, each player rolls the dice, and the players with colonies adjacent to the squares corresponding to the number drawn receive the corresponding resources.

In this VR version, the game plays exactly like in the real world. The players embody avatars installed around the game board. The interface is very intuitive, and even beginner players can be guided to quickly understand the rules of the game. The buttons to build, trade and roll the dice are located to the right of the player when his turn occurs. The button to end your turn is located to the left of the board, which prevents it from being activated by mistake.

When a player wishes to trade, their proposition appears next to their avatar. Free to the other players to accept it, to refuse it, or to negotiate. Generally, the interface is refined and ensures the dynamism and fluidity of the parts.

This VR version has two major advantages. First of all, it is impossible to cheat. Second, it is possible to play even if you have no friends available. Indeed, this is the main problem with board games. There are lots of awesome board games out there, guaranteeing hours of fun. Unfortunately, it is not always easy to get a group of friends (four, in this case) together to be able to play.

With, the problem does not arise. With the click of a button, you can immediately join a game with strangers. It is also possible to invite your virtual friends, or to play against artificial intelligences. Certainly, online board games are not new.

However, board games on PC or smartphones fail to recreate the friendly and warm atmosphere of a real game of board game around a table. However, thanks to VR, it is finally possible to find these sensations. Indeed, players are able to express their emotions through their avatars. For example, you can taunt or encourage another player by pressing a button. Likewise, players can communicate orally using the built-in microphone.

Thus, Catan VR allows jump straight into a board game on a whim. The game is particularly suited to the Oculus Go, Facebook's standalone headset, since it will be possible to carry it in your backpack to be able to play Catan from anywhere and whenever we want.

Experiment 7 has therefore succeeded in restoring all the special pleasure of board games in virtual reality. Now, We can't wait for other cult board games to be adapted in VR. Among the games that seem particularly suited to such a port, we can think of the or the excellent. Likewise, virtual reality could be used to allow gamers to engage in games that are more immersive than ever ...

Lifespan of Catan VR: extended pleasure thanks to the user-friendly aspect 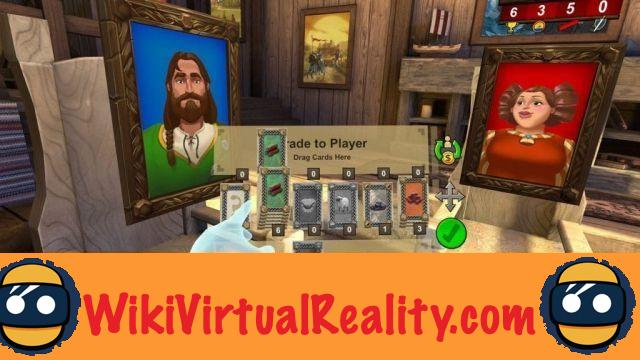 is a simple game to learn, but tactical enough to allow more seasoned players to fine tune their strategies over hundreds of games. Remember also that the game board is modular, which allows each game to be different. These two strengths are also found in the VR version.

In addition, the social and friendly dimension guarantees a lot of laughs. However, as we explained above, this aspect of the game is transcribed in the VR version thanks to the avatars. Better yet, the possibility of playing with strangers allows you to meet new people. The social dimension of the game therefore makes it possible to extend the lifespan.

Unfortunately, during our test, it was very difficult to find opponents online. Remember, however, that the game has been available for a very short time, and that the number of users should increase over time. In addition, the game will be available on Oculus Go. If Facebook's standalone headset meets with commercial success (which is likely given its affordable price), many more players are expected to join the community.

For now, let us specify that the four official expansions of the original game are not available in this adaptation in virtual reality. If the developer decides to implement them later, this will renew the interest of the title.

Catan VR graphics and soundtrack: the spirit of the board game is respected 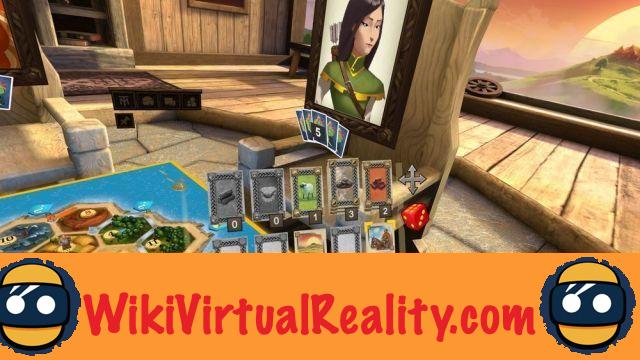 Obviously, the graphics are not the main interest of Catan VR. It is after all just a board game simulator. So there's no need to expect technically impressive lighting effects and 3D graphics.

Despite everything, the colorful graphics remain nice and the artistic direction respects the spirit of the original board game. The sound effects and the soundtrack are also successful and consistent with the visual identity of the title.

Immersion of Catan VR: the atmosphere of a game of board game is restored 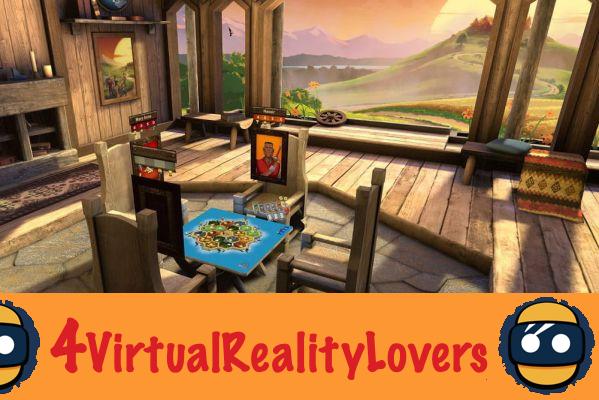 On could imagine an extremely immersive VR version of Catan, in which the player would for example take on the role of a colonist in first person view and actually have to explore the territory, lead his army of knights and oversee the construction of settlements. However, this is not the direction that Experiment 7 chose to take.

What Catan VR offers players is find the atmosphere of an authentic board game by the fire. In this sense, the bet is successful and we can therefore say that the feeling of immersion offered by Catan VR is convincing.

Comfort of Catan VR: a peaceful and relaxing experience 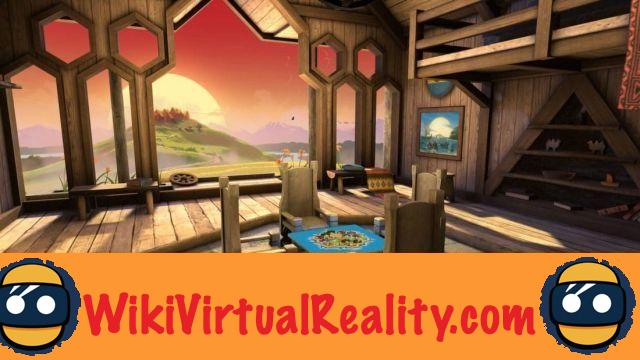 - VR games can often be intense and tiring. This is the case with games in which the player must stand and shoot enemies coming from all sides.

On the contrary, Catan VR turns out to be calm and very restful. Just like his avatar, the player is comfortably seated in an armchair and just press buttons on the screen. In fact, there is no risk of experiencing motion sickness or of being sweating.

Catan VR: conclusion of the test

Catan VR is not the first virtual reality board game adaptation. On the other hand, thanks to a very successful avatar system, it is the first VR game to succeed in transcribing the social and convivial dimension of a board game.

Whether you are a fan or not of this title serves as technical demonstration of the potential of VR for board games and board games. It is now a certainty: this type of game is particularly suited to virtual reality, and particularly to autonomous VR headsets like the Oculus Go.

Scenario: No scenario but a special atmosphere.

Playability: We find all the pleasure of the game The Settlers of Catania.

Lifetime : Long service life thanks to the user-friendly appearance.

Graphics and soundtrack: : An artistic direction faithful to the original game.

Comfort: A comfortable experience to play while sitting in your chair.

Pokémon Go: how to capture Meltan and Magneti shiny

Red Dead Redemption 2: Rockstar is not done with VR according to HTC

Add a comment from [TEST] Catan VR: the famous board game in virtual reality version