[TEST] Chronicles of Crime: a Cluedo (in reality) augmented 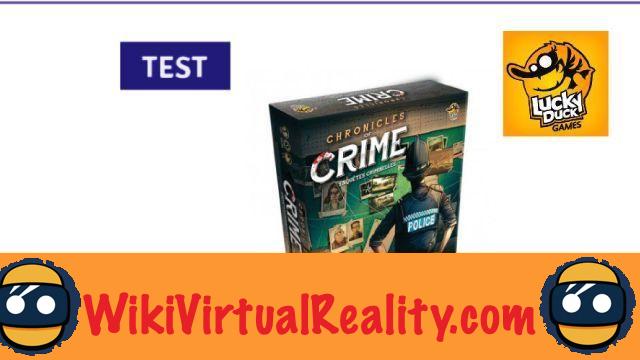 Lucky Duck game returns with a new investigation board game. In Chronicles of Crime you will play with your friends a team of investigators responsible for solving complex cases. Anna Taylor is found dead, can you identify who killed her, why and how?

This game puts you in the skin of a real Sherlock Holmes leaving you advance in the game as you see fit. Thanks to the QR code on the cards, you can go to the places that interest you or question the suspects on the subjects you want.

This new investigation game is not unlike Cluedo, but what is it really? Is it really worth it or is it just a bad thing Let's go on an adventure, the Chronicles of Crime test can begin.

Overview of Chronicles of Crime

Discovery of the game: lots of cards and lots of questions

With the game comes a whole lot of material. You will have the proof tray. This includes twenty locations card with a magnifying glass drawn on it. Underneath is a slot for three cards with a snowman icon drawn on it. In addition to the tray, you will receive 17 place plates, such as Scotland Yard or Nothing hill. Are also provided, 55 character cards, they can represent victims, witnesses or suspects. Last you will receive 52 clue cards and special items, with guns money and many more. Extra, four cards survey aid are provided. There is, for example, the scientist or the criminologist. 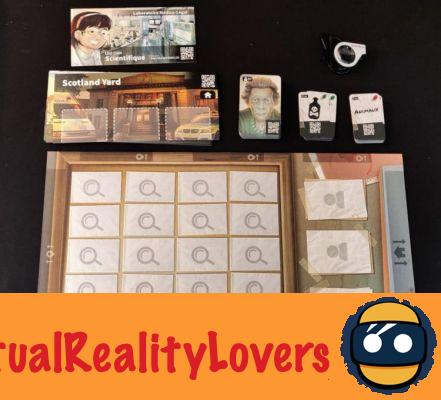 Once you have all of that in hand, you don't really know how to place them. Chronicles of Crime is not really a game like the others with points and dice. In the rulebook, the manufacturers explain the placement of all these cards. However, this does not necessarily help much more to understand. It is starting the part that we grab really where the different cards go on the game board.

Cooperative game: one for all, all for the investigation

Chronicles of Crime is therefore played with one to four players. However, unlike most classic games, this is not a confrontation between the participants. The players will have to help each other and think together in order to find the culprit. No more competition, hello there. The players will face time here. They must resolve the investigation as quickly as possible. A time will be added at each new stage of the investigation as if it were real. When you change location or carry out an interrogation, for example. It is therefore a race against time as a team.

One player controls the phone and reads the testimonials or instructions to others and everyone thinks. So you can play alone without problem, in solitary investigator mode. You can also play more than four. The crazier we are, the faster we move forward.

The Chronicles of Crime app: essential to play

In order to start playing it is necessary to download the app. After that, it is not mandatory to be connected to the internet. The base game contains six scenarios, a tutorial and five investigations. It is possible to buy new ones from the app.

It is thanks to the application that you will be able to start playing. With the tray, you won't be able to do much.

THEapp tells you where to start. For example Scotland yard, the police station and you will guide throughout the game for you to solve the inquiry.

You can l'stop and resume it whenever you want. However, do not take your time too much at the risk of forgetting things. The surveys are quite complicated and it is necessary to have the details of the investigation in mind.

Chronicles of Crimes a game with (a little) virtual reality

To solve the investigations, Chronicles of Crime offers youobserve the crime scenes in RV. You can therefore turn around, look up or down to discover the place as if you were there.

Caring for pair of loupes is extra of the game. She goes to the phone to observe the crime scene in more detail. However, we remove them and watch directly on the phone regularly. With the latter the elements often tend to become blurry and we can distinguish them even less. Forcing option required therefore.

La virtual reality is interesting here since it allows you to play real investigators and discover the place. However, we are static, it would have been nice to be able to get close to the elements that intrigue us.

When we have spotted Indices, we must then look in the cards categories. Many are hiding in the crime scenes. You have to look carefully to find them all. Once these have been identified, they must be scanned.

In Chronicles of Crime, you are in charge of the investigation. For this, the manufacturers have thus put QR code on location, character or clue cards. For an interrogation, you must therefore scan the code of the person you are interested in and scan what you want to ask him about. A book present at the scene of the crime for example. Thanks to this process, you really become master of your investigation. If you forget something important - as we were able to - too bad for you. You will have to rack your brains until you realize your forgetfulness.

If you are wrong and scan a clue that is not related to the story, a message will tell you to continue searching and five minutes are added.

Why you should play Chronicles of Crime

Chronicles of Crimes is a puzzle game, he does not leave no room for luck. You will have to rack your brains to successfully solve the inquiries.

We enjoyed testing Chronicles of Crime. We lend ourselves easily to the game and you quickly become a real Sherlock Holmes. We take pleasure in finding the clues and developing the investigation. The stories are well done without necessarily being too extravagant.

This game is reminiscent of the famous Cluedo in which we must also find the identity of the murderer. The Lucky Duck Game investigation game is presented here as a reworked version of the famous game. Unlike the latter, you will be a team. But it works on the same principle, use your investigative skills. For fans of the Cluedo who have spent too much time on it and who know it by heart, this game will know how to stimulate you again.

La virtual reality is nevertheless optional here. It remains however sympathetic, allowing discover the crime scene as desired. Elle breaks the codes of the traditional board game, and gives us a new way to play.

This is an very good game for children. It allows them to make you think and their learn teamwork rather than putting them in competition. Chronicles of Crime will also know seduce adults. This is not the game where you are going to spend the evening laughing with your friends. But, it maybe very nice for a rainy Sunday afternoon. It's a very affordable investigation game that will please young and old alike who like to work their brains out.

Originality: The virtual reality present in the game really adds something. In addition, it is a reworked and much more developed Cluedo. It is not at all a new version brought up to date.

Product quality: it's a quality product, the stories are well crafted as is the game board and the app.

Replayability: 5 games are offered which last on average 2 hours. It is possible to buy new ones.

Fun : We take pleasure in playing. You feel like a real Sherlock Holmes.

Reflection : with this game you will brainstorm.

add a comment of [TEST] Chronicles of Crime: a Cluedo (in reality) augmented