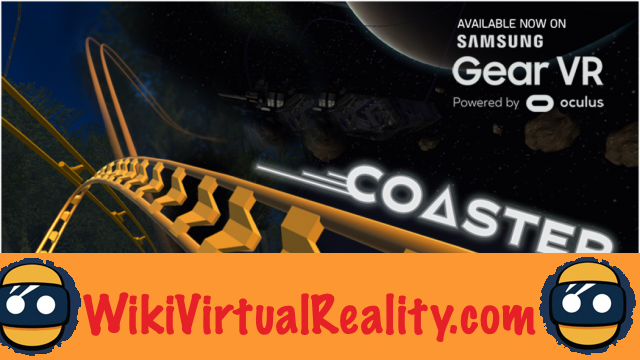 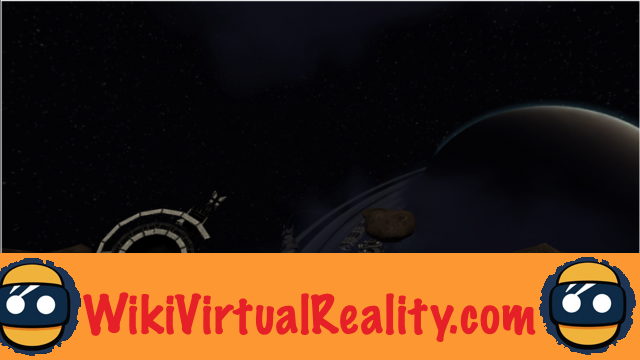 Coaster is not a game, but a virtual reality roller coaster simulator. Consequently, the experience offers neither scenario nor narrative framework. The user can choose between three coasters, each taking place in a different environment: the space, the picnic or the bedroom.

Le the first takes place in the infinity of the cosmos, while the other two place the user in the skin of a miniature being in a roller coaster whose rails cross the elements of everyday life. Each of these three environments is meticulously worked and offers a coherent and neat atmosphere.

Again, no question of gameplay. Coaster is not a game. As in a real roller coaster, the user is placed in a wagon, on rails, and moves automatically. Thanks to the head-tracking technology of the Samsung Gear VR, it is however possible to turn the head at will, to look in all directions and admire the scenery of the different levels.

Given the endless possibilities offered by virtual reality, it is unfortunate that Monster Paw did not attempt to offer game mechanics. One can for example imagine the possibility of choosing the direction of the wagon, or having to avoid obstacles by using the directional pad for example. However, this is not the object of this experiment, which seeks above all to reproduce the sensations of a roller coaster.

With only three different roller coasters right now, Coaster comes across as a very brief experience. The three rides are themselves very short, and around ten minutes is enough to walk around the content on offer.

Il Perhaps it would have been more relevant to create an engine capable of procedurally generating roller coasters, to provide a different experience in each session. This system would also have made it possible to generate infinite circuits, leaving the user the freedom to choose when he wishes to end the experience.

However, such an engine would have required more work for the developers, and would not guarantee the quality of each circuit generated. Anyway, despite the brevity of the experience, some people will probably enjoy relaunching the application from time to time. Let's just hope Monster Paw does flesh out the content over time.

- Coaster's graphics and visual effects are stunning. The Space Coaster is particularly successful, with its orbital station decor and impressive lighting effects for a Gear VR game. We really have the impression of sailing in space at high speed, and to find ourselves propelled into a distant future where the stars are connected by rails built by Man.

Clean at each level, the soundtrack is also successful. Calm and atmospheric electronic music for the Space Coaster, perky hip-hop instrumental for the Picnic Coaster, each track contributes to reinforce the atmosphere of the different levels.

The sound effects also reinforce the sensations provided by the title. For example, in the room, the sound of the draft really gives the impression of hurtling down between the floor and the ceiling of the room. Note that the Space Coaster is devoid of sound effects, since it takes place in space. 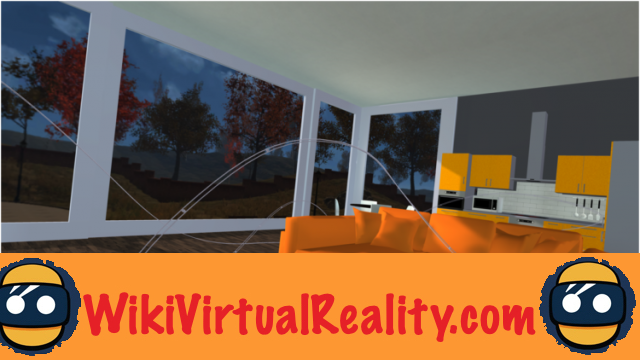 En placing the user in space or in the skin of a microscopic being, Coaster immediately chooses surrealism. Despite everything, the experience manages to provide realistic sensations while respecting a certain number of constraints inherent in a real roller coaster.

As in a real amusement park, the circuits form a loop whose departure and arrival are located in the same place. Likewise, the various loops and twists retain a physical realism. Therefore, the senses are sometimes deceived during this dizzying experience.

Sensitive souls refrain ! This advice applies to both real roller coasters and this virtual reality experience. If you get nausea or seasick easily, you may want to avoid Coaster.

While traveling on rails helps avoid sickness motions, sudden acceleration and other aerobatic figures can easily make you dizzy. Preferably avoid looking down during descents.

Coaster is a fun experience, which will undoubtedly appeal to roller coaster enthusiasts. This application is also a good way to introduce virtual reality to beginners. However, the small amount of content struggles to justify the price of the purchase. The price is certainly reasonable, but some free applications offer a much longer lifespan.

Si you really want to experience a roller coaster in VR, consider downloading this experience. Otherwise, go your way while waiting for the developer to expand the content or another more complete title to emerge.

Scenario: No scenario, but a unique atmosphere in each level.

Playability: No gameplay, but pleasant sensations.

Lifetime : Only three coasters at the moment.

Immersion: Play the role of an astronaut, an insect or the passage of a small electric train in these three coasters!

Comfort: Beware of vertigo and seasickness ...

A pack for the PlayStation VR finally available! ❯