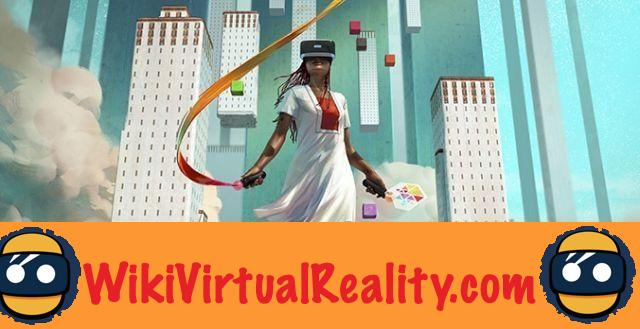 Virtual reality makes it possible to play immersive video games of a new genre, but that's not all. Among its many use cases, one of the most popular is artistic creation. With applications like Google Tilt Brush or Oculus Quill, it is possible to paint in 3D 360 degrees, while software like Google Blocks or Oculus Medium allow you to indulge in sculpture.

In virtual reality, nothing is impossible, and this technology allows artists to let their imaginations run wild. Many beautiful works of art are already circulating on the internet and some world-renowned artists are recognizing the revolutionary potential of VR. However, so far no such app has been available on Sony's PlayStation VR. With CoolPaintr VR, this is now done. But the experience is it up to what other helmets offer ? Response through our test.

CoolPaintr has many similarities to other virtual reality drawing apps, starting with the interface. The user selects his instrument and color, then draw as you see fit. It is possible to play with the DualShock controller, or with a PlayStation Move (or even with the Aim Controller rifle, if you are a paintball fan).

Le the most suitable controller is undoubtedly the PS Move, since it really gives the impression of holding a brush in his hand. The experience is therefore more intuitive. Note that it is not possible to play with two PSMoves. During our test, we also used the DualShock controller. This two-handed controller feels more like painting with a roller, but the handling is not to be outdone.

Thanks to the explanations of the mascot Arty (in English), a few minutes are enough to take the application in hand and navigate smoothly between the different tools. When opening the menu, a laser pointer appears on the screen and allows you to select the instrument of your choice.

There are several types of brushes, but also geometric shapes and 3D tubes that can be directly traced. It is also possible to add animated particles, such as snowflakes, flames, or dust. These different tools are more than enough to bring all your ideas to life… provided you have the necessary inspiration, patience and talent.

The application also allows create 3D models automatically, by simply drawing a closed shape. For example, a circle will turn into a sphere. The application is responsible for automatically creating a skeleton for the model. This feature is quite impressive.

Regarding the color palette, it is of course possible to choose any shade. You can then use the gripper to move and resize an element or an entire scene. Note that the clamp also allows to change the skeletal structure of organic shapes in 3D to twist them in all directions.

It is also possible import images and photos from a USB stick in order to use it as a background. Once your work is completed, you can take a photo to save it on your console, under a USB key, or share it directly with the community on the official website of the application.

In addition, it is possible export creations in Collada format. This format can be imported into any popular 3D creation application. Thus, CoolPaintr VR can be a great starting point for people who want to indulge in 3D creation without modeling knowledge.

CoolPaintr VR lifespan: do you have the artistic flair? 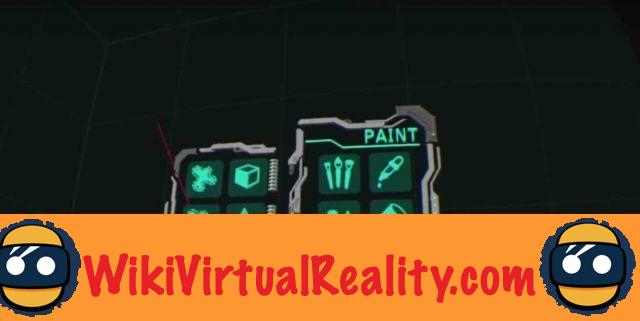 It is difficult to assess the lifespan of CoolPaintr VR objectively. Because, the interest of the application depends strongly on your artistic fiber. If you like spending time painting or drawing in the real world, then you can spend long hours using VR as a new medium to express your imagination.

On the other hand, if you are not particularly attracted by these disciplines, you risk getting bored very quickly. Indeed, even if CoolPaintr VR offers unlimited possibilities, the application does not work miracles: if you can't draw in real life, you won't be able to draw in virtual reality.

I am one of those who thinks that anyone can learn to paint, and this is just as valid as in VR than in front of a real blank canvas. However, in both cases, patience and will will be needed to take the time to progress. 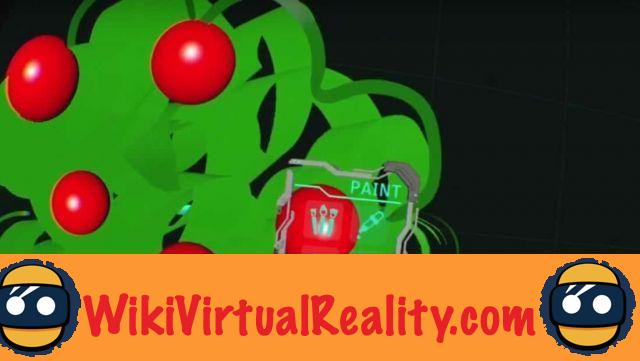 Despite the PSVR's slightly lower screen definition compared to the Oculus Rift and HTC Vive, CoolPaintr VR didn't nothing to envy Tilt Brush in terms of graphics quality. The textures are detailed, the colors faithful, and the lighting effects are pleasing to the eye.

Note that CoolPaintr was not created with a third-party graphics engine like Unreal or Unity. In order to maximize the performance of its application, WildBit directly used the PS4 SDK and its own engine.

The most demanding may regret a slight visibility of the pixels, but overall nothing too much trouble. The title does not offer a musical soundtrack.

CoolPaintr VR immersion: immerse yourself in your works of art

Thanks to virtual reality, it is possible to immerse yourself in a work of art as if we were diving into a painting. The user is not faced with a flat canvas, but truly caught up in the drawing. This is what CoolPaintr VR offers, along with Google Tilt Brush and Oculus Quill.

However, unlike these two apps, CoolPaint does not allow physical movement 360 degrees all around the work. Blame it on the PlayStation VR tracking system, which is much more limited than that of the Rift or Vive. Indeed, the user must remain in front of the PlayStation Camera, whose field of vision is also limited. Moreover, it is not even possible to draw or move elements behind you. This weak point slows down immersion.

CoolPaintr VR comfort: comfort reduced by the tracking of the PSVR

Like the feeling of immersion, the comfort of CoolPaintr VR is attenuated by the tracking system of the PlayStation VR. Indeed, while the user's brush is carried away by passion, it is suddenly held back by an invisible obstacle. His controller is out of the narrow field of view of the PlayStation Camera, and its movements are no longer detected.

The feeling is frustrating. This problem forces the user to move the scene very regularly to the sides in order to be able to continue his work, and the fluidity of the experience was reduced.

CoolPaintr VR against the competition

Due to the similarity between CoolPaintr VR and other virtual reality creation applications, comparison with Tilt Brush and Quill is inevitable. Unfortunately, it is not necessarily flattering for the software from Wildbit Studios.

As mentioned previously, CoolPaintr VR sins first of all by the inability to paint 360 degrees. It is therefore not possible to create an entire environment in which the viewer can find themselves surrounded, something that Google and Oculus apps allow.

In addition, the other weak point of CoolPaintr is the inability to create animations from the virtual reality drawings created in the application. This feature wasn't originally offered by Tilt Brush and Quill, but today it is, and artists are using it to work wonders. However, it is possible that CoolPaintr will offer this option in turn later.

CoolPaintr VR, however, also has strengths in relation to these applications. The software is for example able to keep a high level of performance at 120 FPS. In addition, it is the only application to offer a system of organic shapes allowing to automatically create 3D models from simple plots.

Generally speaking, this software has just arrived on PlayStation Store, and it would be unfair to compare it without indulgence in the face of applications available for almost two years and updated many times. It will take give CoolPaintr time to develop in turn.

Anyway, CoolPaintr is so far the only art creation app available on PSVR. It therefore does not have to fear competition.

With CoolPaintr, the PSVR finally has its artistic creation software. Considering the popularity of this type of apps (Tilt Brush remains one of the most downloaded VR apps on Steam), this title comes fill a significant gap in the PlayStation Store.

The experience is very convincing, and you can feel the passion and involvement of the developers in this project. The application is not free from flaws, but its main weak points are related to the technical limitations of the PSVR. It remains to be seen that Wilbit will manage to tweak its software over time. The future will tell.

Playability: Draw in VR with all kinds of instruments.

Lifetime : A lifespan that depends on your talent and your creativity.

Immersion: The lack of 360-degree tracking slows down comfort.

Installing an application on the Oculus Quest 2: the steps to follow ❯