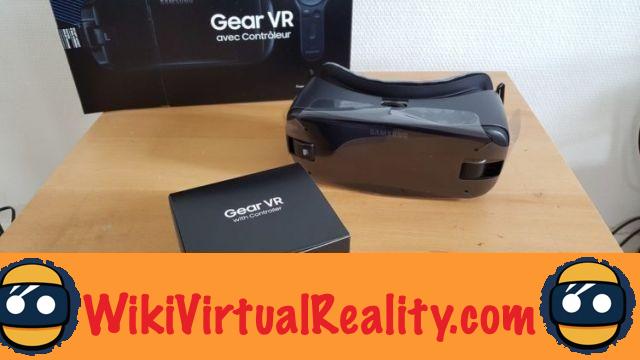 It is in 2014 that Samsung is attacking the virtual reality market. The Korean then offers a first version of his Gear helmet, for developers. This “Innovator Edition”, compatible with the flagship of the time, the Galaxy Note 4, allowed developers to understand mobile VR. To then discover the tools made available to them by Samsung and Oculus. A year later, a first commercial version Gear VR hits the market. Compatible with Galaxy S6, S6 Edge, S6 Edge + and Galaxy Note 5, the Gear VR headset (2015) marks the appearance of VR headsets in the mainstream market. In 2016, Samsung slightly revised its copy and distributed a black version of its headset, designed to accommodate the new flagships of its Galaxy, the S7, S7 Edge and the infamous Note 7.

On March 29, 2017, at its annual Unpack event, Samsung lifted the veil on its new mobile range: Galaxy S8 and S8 +, Gear VR and controller and new Gear 360. While the S8 and Gear 360 have undergone a real facelift, the Gear VR 2017 is content with slight design changes to ensure compatibility with the brand's new flagship smartphones. The real novelty of this Gear VR is its bluetooth controller which, thanks to a motion sensor and a trigger, will allow you to create new, more immersive experiences. But this controller Does it justify the purchase of a Gear VR 2017 or is it better to just buy the accessory on its own, compatible with older generations of Gear VR? We will try to provide some answers in this test. 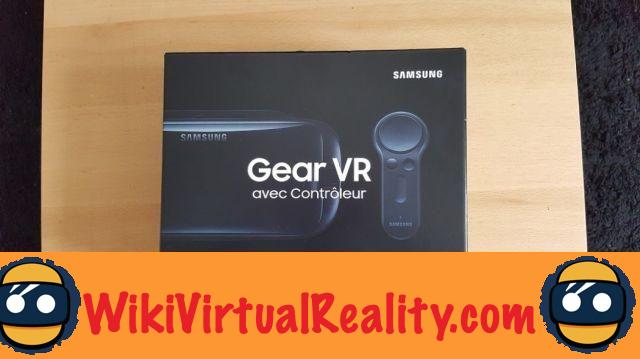 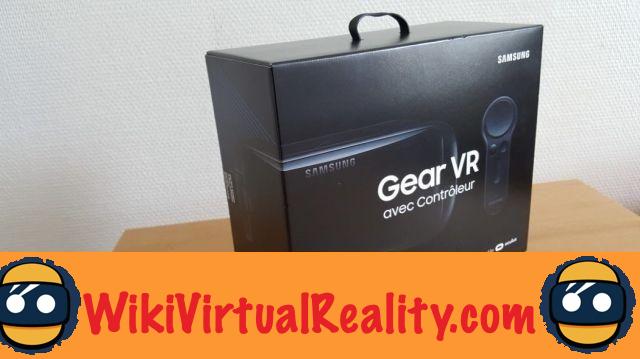 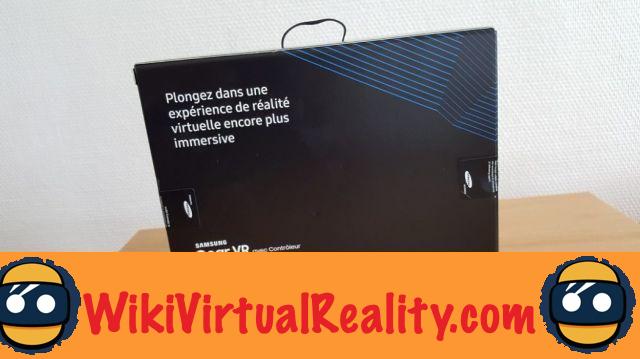 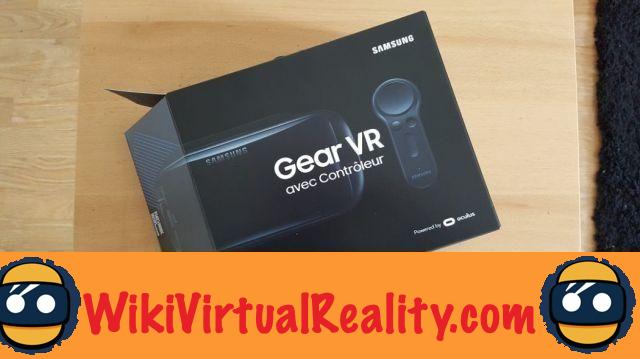 Le Gear VR 2017 comes in a matt black cardboard, which represent the helmet and its controller. On one of the edges of the box and on the back, we find some basic information concerning virtual reality as well as list of compatible terminals. The assembly is kept sealed by two ends of black adhesive tapes. Once these have been removed, you can access the material: the Gear VR, without straps, is installed on a plastic support, in which we also find a black box marked “Gear VR”. This boîte contains the different accessories : a user manual, a warranty notice, two straps, a wrist strap, the controller, two AAA batteries and a micro-USB adapter. In the end, we find content quite close to what the two previous generations of Gear VR offered. 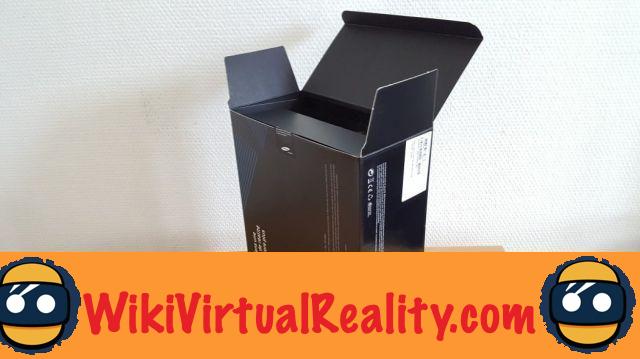 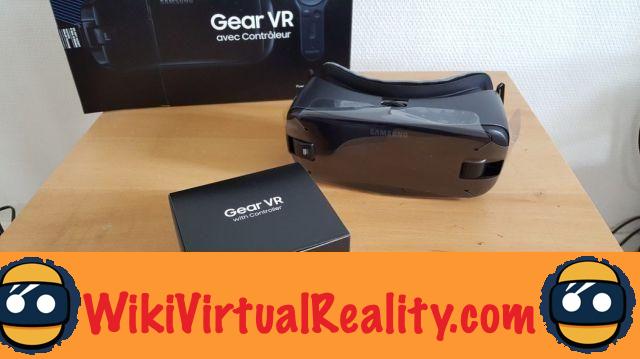 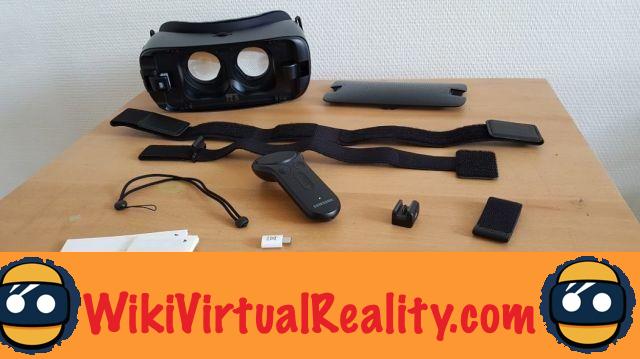 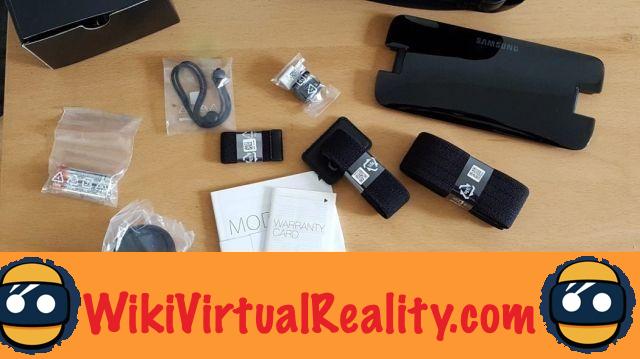 Design and ergonomics of the Gear VR 2017 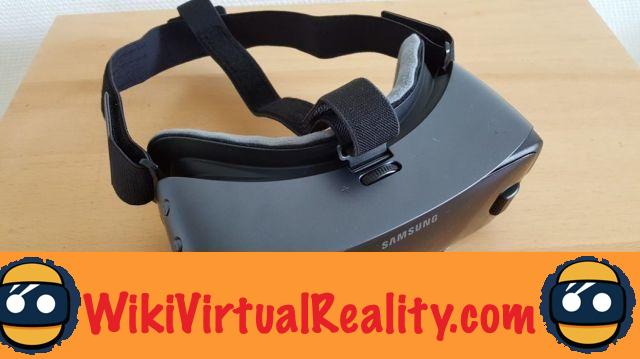 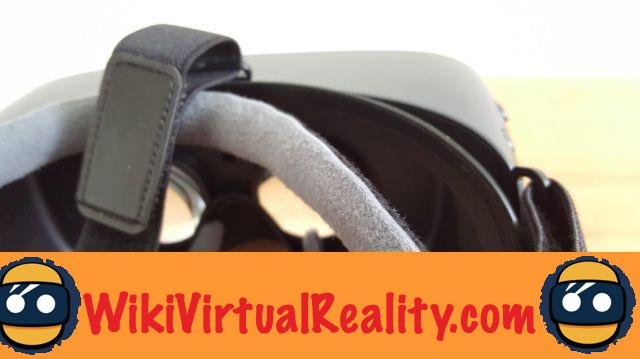 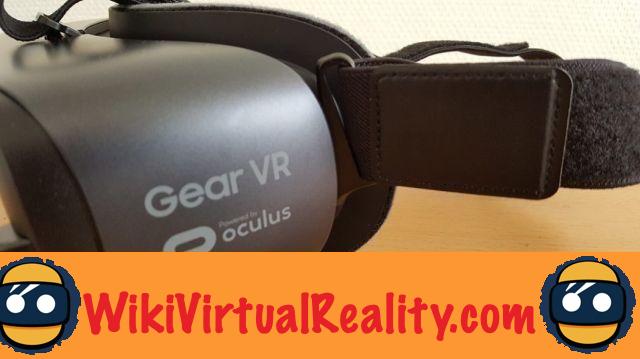 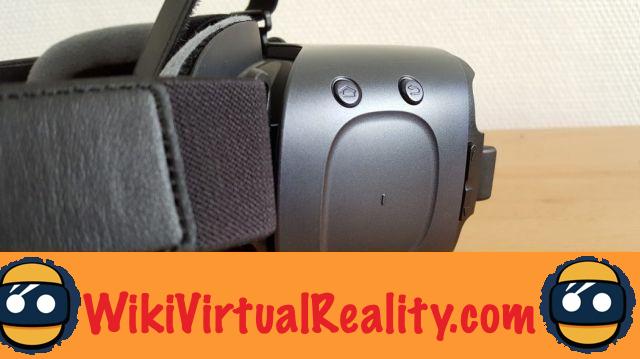 Like the 2016 version, the Gear VR 2017 sports a black dress, en matt plastic. front cover, which houses the smartphone housing, is also made of plastic, this time shiny. Watch out for fingerprints! Once the smartphone is installed, the cache will no longer be of any use. We regret that this 2017 version does not revive the practicality of the first Gear VR of the name, which allowed the smartphone to be covered with the cache.. A Rfoam padding self-adhesive ensures maximum comfort and immersion. 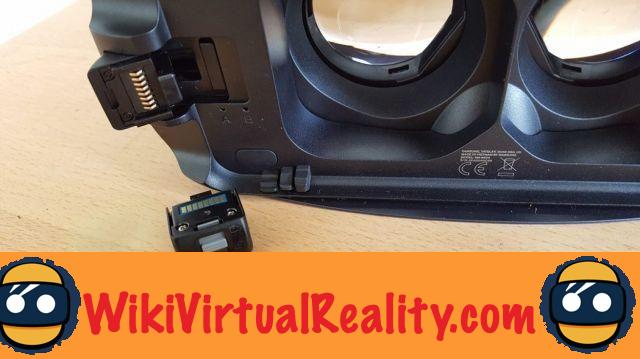 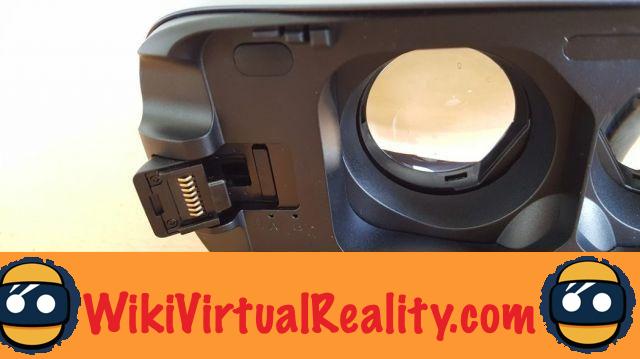 The Gear VR 2017 is compatible with the new Galaxy S8, the first Samsung mobiles to swap the classic micro-USB for a USB type C port. ensure compatibility with these old smartphones (S6 and S7 range excluding Active models), the Korean provides a micro-USB adapter. The strap system has also been redesigned, without this bringing about a real improvement in the comfort or use of this Gear VR 2017.

This year a new accessory intervenes in Samsung's Galaxy VR: the bluetooth controller. Designed in black plastic like the VR headset it accompanies, the Gear VR controler has enabled the manufacturer to deport the buttons and touchpad on the right side of Gear VR headsets. These controls are still available on the headset itself, but the user no longer has to systematically raise their hand to interact. With the Gear VR controler, the interaction becomes more natural. The controller incorporates a motion sensor (more precisely an inertia unit to measure the rotation) allowing to improve its precision. Finally, a trigger button appears, promising the arrival of richer content. 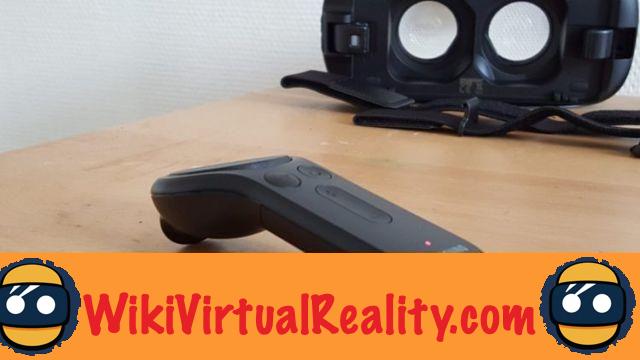 Getting started with the Gear VR 2017

Before even being able to properly test the Gear VR 2017, it is necessary toinstall the two straps that keep the helmet on the user's head. The assembly system of the Gear VR 2017 differs a bit from that of the older models. If this provides additional ease of assembly, in terms of comfort, nothing new. 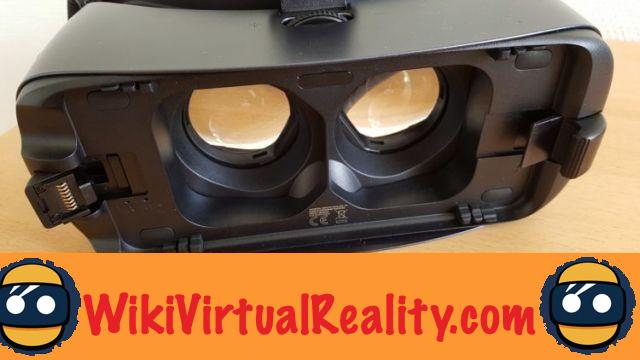 With a weight of 345 grams, the Gear VR is quite light. Once the smartphone is installed, in our case a Galaxy S6, the whole remains comfortably to wear. To ensure compatibility with these last three generations of flagships, Samsung provides two adapters, one for smartphones with a micro-USB port and for those using USB type C. This was already the case with the Gear VR 2016, in order to accommodate the Note 7, the first Samsung smartphone to abandon micro-USB for USB type C. Beyond the type of phone connector, the brand with three stars also thought about device sizes: thus, the connector can be placed in two positions, A and B, to accommodate small smartphones (Galaxy S6, S6 Edge and S7) or larger (S6 Edge +, S7 Edge, S8 et S8 +) ..

Once again, the components of the Samsung Gear VR 2017 are substantially the same as those of the previous generation. Thus, we find the classic triptych of sensors: accelerometer, gyroscope and proximity sensor as well as optical lenses offering a field of view of 101 °. 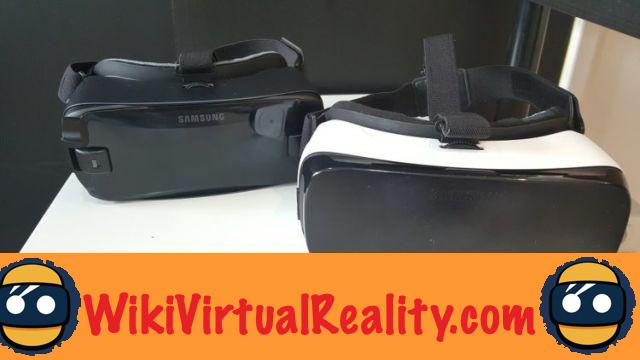 La graphic quality is not conditioned by the lenses, of good quality by the way, but the smartphone installed in the helmet. The larger the screen the phone has, the better the FOV will be. A phone with a smaller screen will reduce FOV but have better resolution. Greatly attenuated on the previous version of Gear VR, the flickering that we observe around certain elements of the virtual environment remains present without disturbing the experience.

Gear VR Controller: the joystick that makes the difference 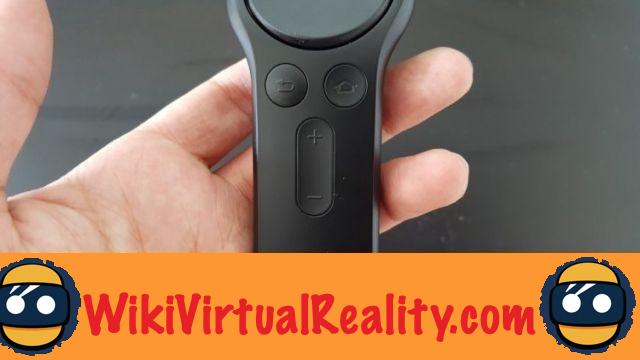 Here. We come to the nerve center of this test: the Gear VR Controller. It is indeed this controller that allows the Gear VR 2017 to truly differentiate themselves from old models. Samsung therefore decided to duplicate the controls on the right edge of the Gear VR on a bluetooth controller. That's not all. The Gear VR Controler also houses a motion sensor, in order to follow the movements of the user's hand, and adds additional interaction potential with a trigger button. 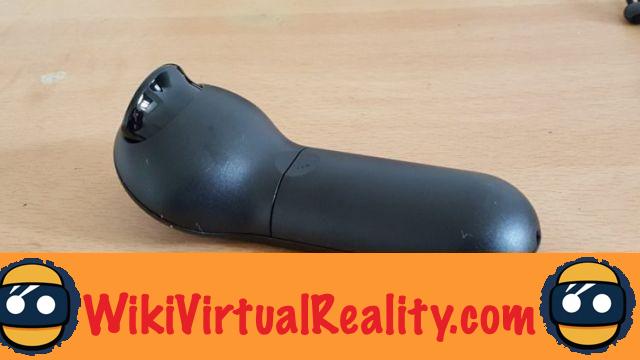 The Gear VR Controler is very light. Samsung provides a wrist strap which, like that of a Wiimote, will ensure the user's back. The Korean manufacturer made the choice of batteries to power the new controller. Those who have thrown away their last batteries with the remote control of their VCR rest assured, Samsung provides 2 AAA batteries which should ensure good hours of play. A Color LED indicates the status of the Gear VR Controler : on, in bluetooth pairing mode, low battery etc. 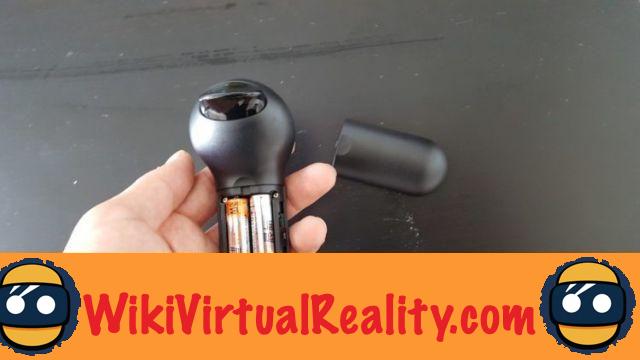 The set is good quality and pleasant in hand. The trigger falls perfectly under the index finger while the thumb naturally went to the directional pad and, if necessary, the home and back buttons. As on the Gear VR, these two buttons have been differentiated by their shape: the concave one will correspond to the return key while the convex button will take the user to the Oculus home page, where the percentage of remaining battery is displayed.

But concretely, What is this Gear VR Controler for? In addition to facilitate access to controls, thanks to its motion sensor, the Gear VR Controler allows the user to better locate the user in space, thus participating in the improvement of the immersive feeling. The real use of this new accessory actually lies with the developers. They are the ones who, by their imagination and skills, will be able to offer new gameplay adapted to the material. The machine is already on the way. At launch, it was no less than 22 games, mostly new, that Samsung presented as compatible with its controller. 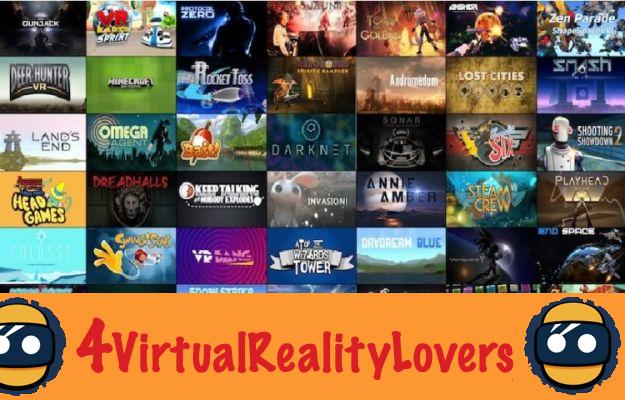 Among the games offered to accompany the launch of the new Gear VR 2017 and its controller, we find for example Sing Space, a multiplayer karaoke game, Paint VR, a kind of Tilt Brush for Gear VR, Facebook 360, a social app for enjoying content 360 ... Recall that unlike the Oculus Touch, the Gear VR Controler only allows rotary and non-positional tracking, like the Gear VR itself by the way. Concretely, do not expect to be able to grab virtual objects as if you were doing it with your real hand. No. The Gear VR Controler instead allows you to point and rotate items in the virtual environment. Like most devices that only have rotary tracking, the Gear VR Controler suffers from some inaccuracies. On the other hand, calibration is quite simple to implement, thanks to a long press on the home button, and seems accessible everywhere.

The only real competition comes from Google with its Daydream headphones. Its design is much more polished, with a fabric outline. The headset also comes with a remote control just like the Gear VR. As for compatibility, it can accommodate about fifteen different Android smartphones. It includes the latest phones from Samsung among others. The next version should be compatible with all Android smartphones.

Once again, Samsung gives us a high quality mobile VR headset to establish its leadership in the mobile VR market. We regret that the helmet itself does no novelty. The arrival of the Gear VR Controler is, however, to be welcomed. The Korean company opens an additional door here for developers who can now imagine new, more immersive experiences. At 129 euros the Gear VR headset and the Gear VR Controler, the value for money is more than reasonable. Even better, owners of old versions of the helmet will be able to pay 39 euros to obtain the controller without having to change their Gear VR. Finally, Samsung and Oculus seem to want to make a point of offering optimized games. More than 50 Gear VR Controler compatible games are said to be in preparation. For those who are still hesitant to invest in a mobile VR headset, The Gear VR 2017 pack appears to be the best offer on the market, as long as you have one of the compatible Samsung models.

Unboxing : The packaging of the Samsung Gear VR 2017 is classic. All the necessary equipment is provided. We appreciate the presence of batteries for the Gear VR Controler.

Design and ergonomics The design of the Gear VR 2017 is quite similar to the previous version. The Gear VR Controler pairs well with the headset in style and is convenient to

Getting started: Whether it is installing the smartphone or handling the Gear VR Controler, the handling of this Samsung equipment is easy.

Graphics: The quality is mainly a function of the screen of the smartphone used.

add a comment of [Test] Samsung Gear VR 2017: a controller to discover a new Galaxy of immersive experiences