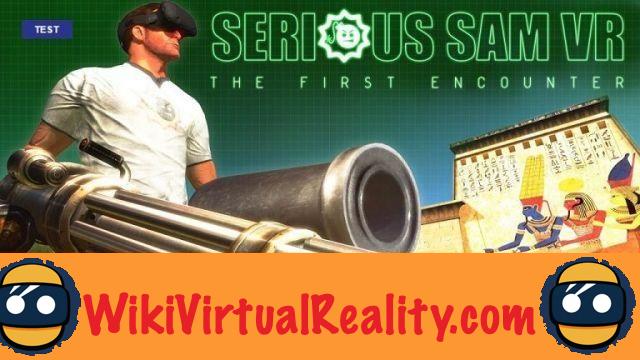 Serious Sam VR: The First Encounter is virtual reality FPS action. This is in the form of a Doom like taking place in places very similar to sites in ancient Egypt. Rhythmic and bloody, the game suffers from a switch to VR which reduces its beauty in terms of graphics despite a simple and immersive gameplay. Prepare to face dozens of monsters armed with a heavy arsenal.

We have tested the early access version for you. The test therefore does not reflect the final version of the game. 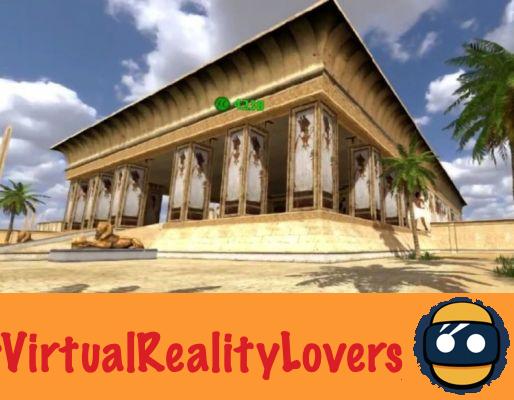 From the first moments of the game, this sensation is felt: it is indeed a game Serious Sam. Indeed, The First Encounter is a VR revival of the game released in 2009 on PC and Xbox 360. The game perfectly takes up the Egyptian atmosphere and decor of the first games, just look at the deeply rooted aesthetic of Egyptian temples. From the first enemies, the Doom like atmosphere is found. These explode under the impact of the bullets and give way under the chains of the chainsaw. On the other hand, it is regrettable that the game does not have sequences presenting the story, for non-connoisseurs this does not yet allow immersion. 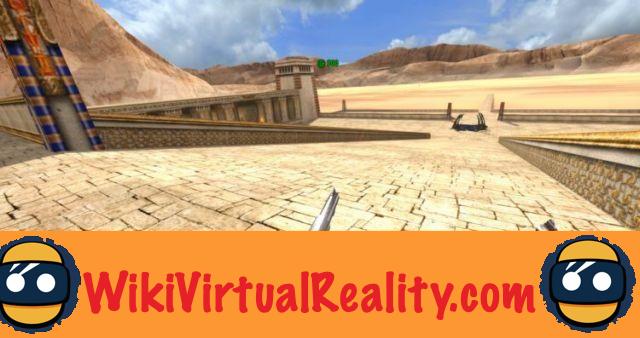 Serious Sam VR, has a single player campaign but can be played as a duo. However, there is no tutorial and the difficulty increases as the adventure progresses. Getting started with the game with HTC VIVE is very easy and fun and the presence of two weapons instead of one greatly facilitates the advancement in the levels. Especially since the inventory is growing rapidly with: colts, shotgun, missile launcher, chainsaw or even sawed-off shotgun. If the ammunition for the Colts is unlimited and there is no reserve of gasoline for the Chainsaw, those of the other weapons are however. However, these have an interface on them to see the amount of ammunition left. The use of Vive controlers is also quite simple, not to complicate the task.

If there is no animation for reloads, the graphic details concerning the weapons in hand are very fine and precise and these come alive when you use them. The trigger of the colt is activated and the barrel turns with each bullet. Moreover, each weapon has aiming aid via a red light beam which makes it possible to facilitate the shots and not to water the whole map. Regarding Serious Sam, this is non-existent during the game phases since his hands do not even appear on the weapons. However, it appears during animations at the end of the level (despite some bugs). However, in the manner of a Duke Nukem, the character comes out from time to time punchlines which reinforces the immersion and characterization of the character. 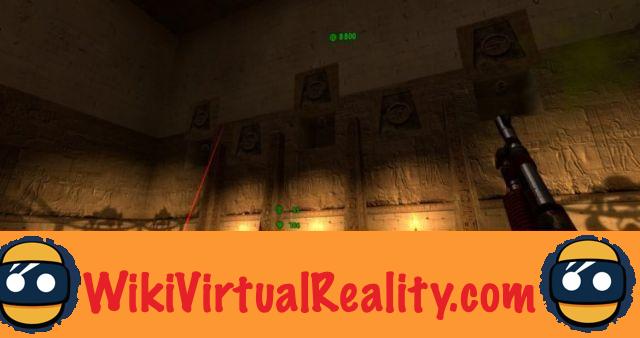 As mentioned earlier, the game comes in the form of a completely paced and bloody Doom-like where enemies show up when the player enters a room. Each item to pick up comes in a simple form: healing, armor points, ammo, and new weapons. In addition to these objects, other things are to be found such as secrets. The game system is extremely simple, it is only a matter of moving forward and killing enemies, as well as collecting secrets.

The other advantage of the game is the full exploitation of VR. The 360-degree periphery is fully utilized, and enemies are landing from all sides. In addition, the HTC VIVE allows you to remind the player within the VR where his IRL game perimeter is. This observation does not seem like much at first glance but in this game where we have to move this simple fact is saving. Finally, the interface is simplified so that the player can change weapons simply without breaking the immersion in the game.

All is not perfect in Serious Sam VR : The First Encounter starting with the Artificial Intelligence of enemies which is very limited. These have no strategic intelligence, they are content to rush over you without wanting to avoid weapons and come impale on your chainsaw. You really need enemies to overwhelm you in numbers to be able to hit you.

When it comes to movement, Serious Sam VR, like most VR games, has found the parade for player movement: teleportation. So, this option is very practical, since all the developers use it, however it creates enormous problems when it comes to finding one's way in space. The player depending on his skills will have at least one to two seconds of latency where he will have to find his way again in space. When it comes to moving forward, that's okay; on the other hand, when it is necessary to find a new angle of attack while the enemies are flocking it becomes problematic.

Likewise, the wills of movements such as jumps are simply not designed for a VR game. The times when the player has to jump to access objects can become real ordeals. So much so that the game looks more like a port from the PC version to VR more than a game designed for VR. Likewise, interactions between the world and the character are average. If Sam knocks down the candlesticks, the damage to the player only manifests as a red screen and that's it.

Regarding the graphics, the early access is problematic. When we tested the game, the overall overall performance was quite passable and even disappointing.. The detail of the enemies is not precise and sometimes offer splendid geometric shapes. Yet the attention given to the decorations and everything that makes an atmosphere of ancient Egypt. It is all the same damaging that this game does not offer any guarantee of graphics in the detail of the actions which could make the immersion even stronger. 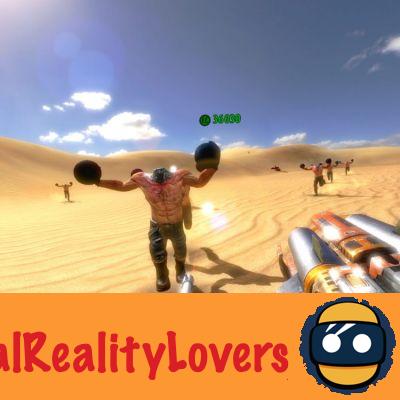 We must also talk about the role of music which is effective in each table, it is triggered each time enemies arrive or when changing rooms. It also serves as an Easter Egg when a secret is found and the most famous musical notes of the Indiana Jones theme are triggered. In short, the music is very functional within the game without taking up all the space compared to the action scenes.

Lifespan: a Serious Sam VR with extension and several 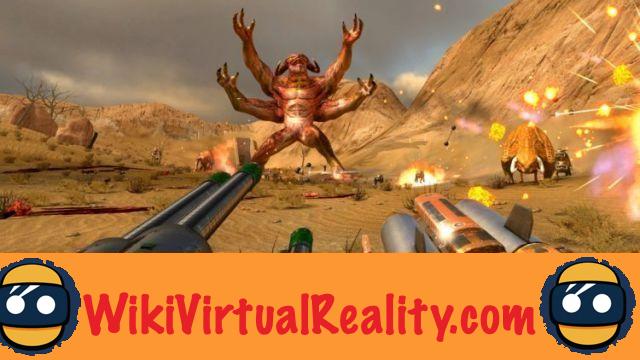 We remind you that we played the early acess version so we did not have all the possible data in hand. If the single player campaign has an average duration of about 15 hours, it is obvious that the different possible modes of play in multi-players extend the possibility of playing time.. The difficulty in the single player campaign does not affect the lifespan of the game very much, despite a few passages that are quite complicated to pass. The multi-player version allows for the incorporation of up to 16 participants who can join the campaign.

Serious Sam VR provides an efficient run and gun experience, despite poor graphics. The ambiance of the sets is perfectly integrated into the different rooms. Admittedly sometimes enemies can attack out of your field of vision which will offer great scares but relatively there is no visual discomfort which assails the player. Regarding the “motion sickness” there is for the moment nothing to complain about thanks to the teleportation even if some players may find it a certain situation of discomfort if they get lost in the rooms. On the other hand, the whole is effective and really serves the rhythmic atmosphere of the game. 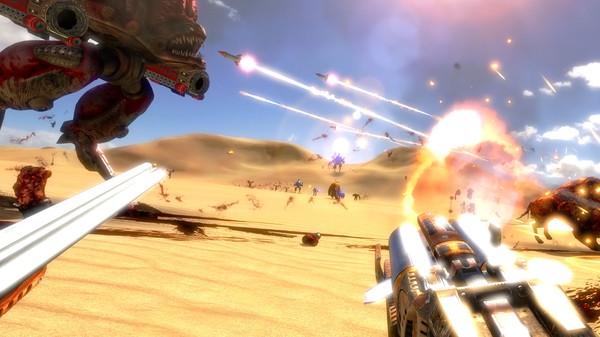 In the light of this test, it is important to express some reservations about Serious Sam VR : The First Encounter. Despite a comprehensive campaign, varied game modes, and simple gameplay, the game suffers from a mobility and interaction issue. So much so that the game looks like old VR arcade FPS. Yet the fun and ease of the gameplay make the game easy to learn.

Scenario: Even without recontextualizing the story there is a sufficiently long campaign.

Playability: Efficient controls, despite poor mobility and AI. Lift not thought out for VR.

Graphics: Simple but very geometric graphics despite a well thought-out play of lights. .

Visual comfort: Despite some adaptation problems with teleportation, the transposition to VR is effective.

Pokémon Go: all you need to know about Team GO Rocket invasions ❯