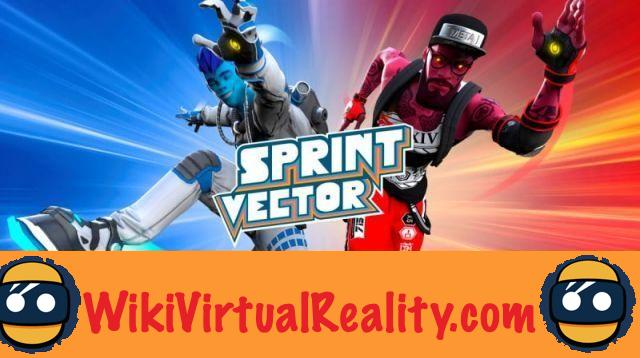 In 2017, Survios launched Raw Data: a cooperative and competitive multiplayer FPS that quickly established itself as a benchmark in the VR gaming landscape. At the end of 2017, the developer also launched Electronauts, an excellent music creation application in virtual reality. In February 2018, Survios returns with Sprint Vector: a competitive multiplayer running game eagerly awaited around the corner. So, does the title live up to the developer's expectations and reputation? 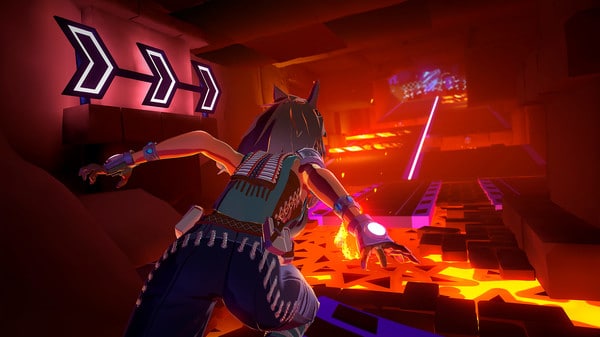 Sprint Vector offers players the opportunity to take part in the Sprint Vector Championship Intergalactica, an intergalactic running championship in which participants must run, jump, climb and fly in completely frantic obstacle courses.

The scenario fits on a piece of paper, because Survios does not intend to fall asleep with a great story. Sprint Vector is an adrenaline-fueled action game with exhilarating gameplay. The atmosphere is still very original, with characters all more wacky than the others, hilarious comments (in English) during the races and various very varied circuits.

Sprint Vector is an 8 player racing game. However, there is no question here of racing or other vehicles. The players are equipped with skates, and must glide at full speed on tracks strewn with obstacles, turbos and power-ups.

To move, the player must swing his arms back and forth alternately, like on rollerblades. The faster the player moves their arms, the faster they gain. However, it is also necessary to squeeze the trigger simultaneously, and release it at the right time to go even faster. It's this precise element of Sprint Vector's gameplay that is particularly brilliant. As the player pulls the trigger, he must contract his arm, and thus provide a real effort. Thus, from the first parts, the game is surprisingly physically intense.

Depending on the direction in which the upper part of his body is turned, the player can turn to take turns. By pressing the buttons of the joysticks while swinging the arms, it is also possible to jump. Jumps are essential during races, because obstacles dot the circuits. The player must also crouch down to duck and avoid certain obstacles, while continuing to run.

Among the most advanced game mechanics, there is also the possibility of fly during a jump with the arms forward, to climb the walls or to negotiate turns by simultaneously pressing the jump button and the trigger. The closer the player's arm is to their body, the wider the turn will be. On the contrary, if his arm is far away, he will take the turn tighter. The game is therefore easy to learn, but has many very technical gameplay subtleties.

As in a Mario Kart, there are also bonus to be collected by breaking crates scattered on the track. They can be land mines to slow down or slow down opponents, turbos or projectiles. Bonuses are used by pressing the trigger twice. You will understand, the races are extremely fun and competitive.

It is possible to play solo, but the real interest of the title obviously lies in its multiplayer mode allowing you to face 7 other players via Internet. The only limit in terms of speed being the physical condition of the players, we quickly find ourselves paddling in the void with all our might to try to overtake the fanatics who seem completely doped in front of their computer. A challenge mode also offers different challenges to overcome. Prepare to play sports!

As a competitive multiplayer game, Sprint Vector offers a unlimited replayability. The title is so addicting and fun that you can easily imagine playing it for several years. The game is easy to learn, but difficult to master and the room for improvement is immense. It is only after having learned all the different circuits by heart that we can really compete with the best players in the world.

In addition, the lifespan is extended by the possibility of acquiring "skins" for the different characters. Thereafter, there is no doubt that new characters and circuits will be implemented by Survios, further extending the life of the game.

Sprint Vector graphics and soundtrack: a psychedelic and addictive universe 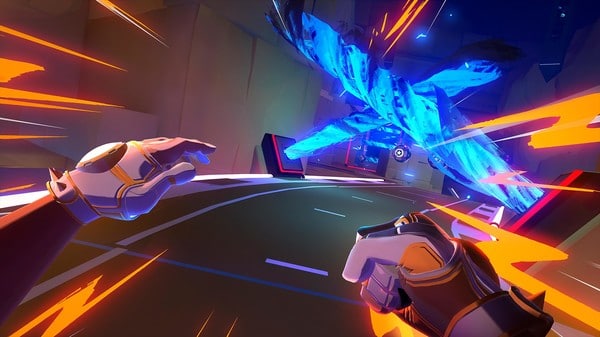 The graphics in Sprint Vector are very, very, very colorful. The effusions of color gush in all directions, the players' gestures leave trails of light and it is a real pleasure to evolve in this shimmering universe, almost psychedelic. Survios has opted for cell-shading graphics in cartoon style, and the result is very successful. Unreal Engine once again does feats.

- different circuits offer varied environments, and we go from the snow-capped mountain to the erupting volcano via Ancient Egypt. The different sound effects are also very successful and help to make the experience extremely addictive. 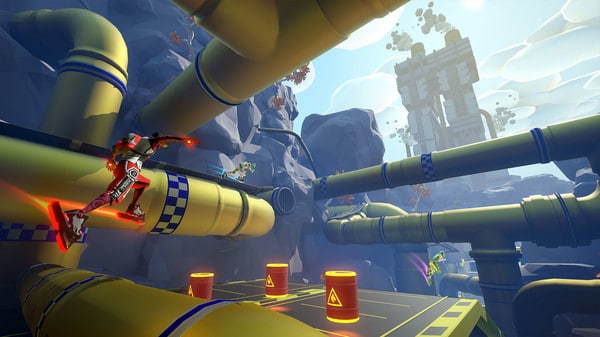 If Sprint Vector takes place in a futuristic and surrealistic imaginary universe, the sensations it provides are very real. To hope to win the race in multiplayer, the players must give their all and provide real physical effort. After a few races, you are likely to be out of breath.

Fact, the experience is very immersive. With the contextual comments and the possibility for players to communicate via their microphone during the race, it really feels like taking part in this intergalactic championship, and winning a race gives a feeling of jubilant triumph (with the addition of the possibility of taunt opponents after the race).

Sprint Vector comfort: no motion sickness, but beware of exhaustion

Regarding visual comfort, Sprint Vector is flawless. The colorful graphics are a feast for the eyes, and no sensation of motion sickness is not to be deplored despite the speed of travel.

On the other hand, the experience is so intense and physically demanding that we can hardly speak of "comfort". Instead, prepare to do your daily sport by playing this game, and then rest quietly on your sofa. 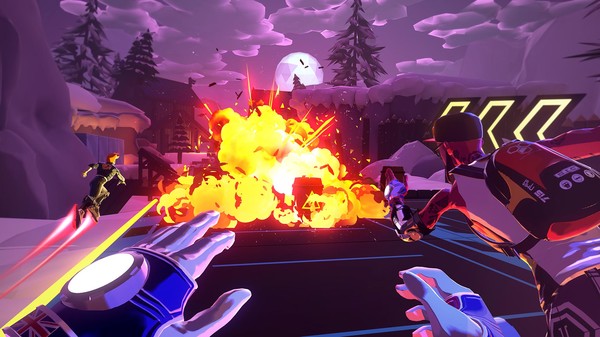 If we were to compare Sprint Vector to other non-VR games, we could see a mix between Mario Kart and Overwatch. As in Mario Kart, players indulge in crazy races ignoring realism to offer only fun. As in Overwatch, players can choose their favorite character and customize it by choosing different outfits.

In VR gaming, the only game we can compare Sprint Vector with is. This parkour game offers a similar movement system based on the reciprocating swing of the arms. Recently, also offers a competitive mode offering players to race. However, Sprint Vector being directly designed as a competitive game, its mechanics go in this direction and offer a more successful experience. In addition, the graphics are much prettier and more original.

Fun, addictive, visually very successful and with an original atmosphere, Sprint Vector immediately stands out as one of the best competitive multiplayer games in virtual reality. The gameplay is as exhilarating as it is original, and the art direction is exhilarating. In addition, the experience is so physically intense that it is imagined well deployed in gyms to replace treadmills. We feel that Survios has gained experience with the development of Raw Data, and this title is a complete success. Hats off!

Scenario: A minimalist scenario, but a very strong atmosphere.

Graphics and soundtrack: An original and colorful graphic style in cell-shading.

Immersion: A very immersive experience because it is very physical.