[Test] Stooksy VR XL and Tab 7: A helmet to build yourself 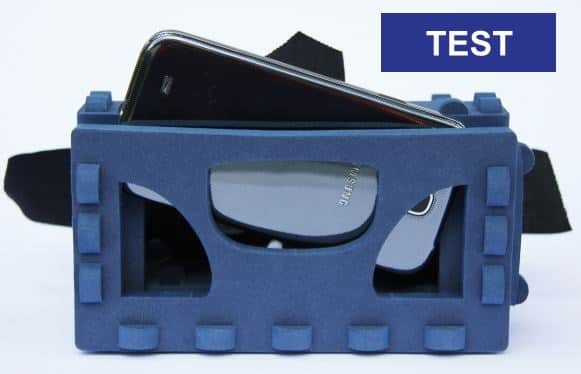 The headset unboxing is quite special, because it is not supplied in a classic box like 99% of CardBoards, but in an envelope, large enough certainly, but an envelope all the same. But why then, an envelope. Quite simply, because this helmet will have to be assembled from A to Z, assembling all the parts without being wrong, because the assembly is quite tedious, and redoing the assembly will be as annoying as it is long. However, Stooksy provides a very good user guide with its helmet, which explains quite well how to mount your helmet. Even people who are not used to editing will be able to successfully make their helmet. 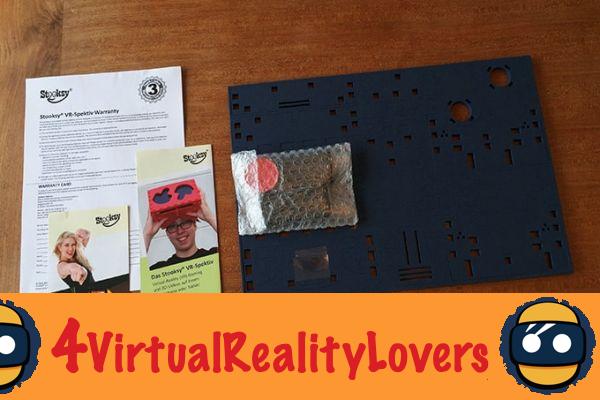 However, do not give the load of this assembly to a child alone, it will be too difficult for him, and the youngest ones could swallow the assembly parts. The assembly can last from two hours to a whole morning for the less accustomed. It is quite long, but this duration could have been even longer, if the manual was not of good quality and luckily it is.

One of the positive points is that you will not need any external element to mount your helmet (no need for glue, glue, scissors…), because everything is supplied in the envelope. Nevertheless, it will be your duty not to lose the parts, and especially not to break the lenses, because there will be no replacement. 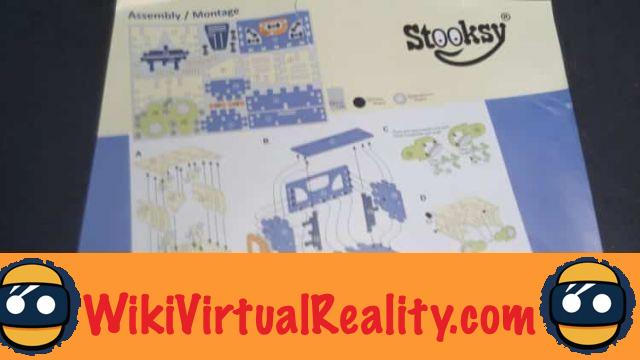 The main negative point remains the explanation (rather light) concerning the attachments of the straps, as the instructions for use of the assembly of the helmet are well done, but that on the straps is very poorly done. You don't understand where to place the straps, which can get on your nerves when you've spent some time on the rig, and you're so close to the goal.

The design of the helmet is quite childish, we really have the impression of being in the presence of a helmet taken out of a Kinder Surprise, or a Lego construction in hand. The material used reinforces this impression, it may appeal to some, and displease others. But this aspect hides a real strong point, the Stooksy is unbreakable, you can throw it from the 3rd floor, your helmet will not break. However, the smartphone must not remain inside, because it will not resist, ditto for the lenses which depending on your luck or not, may be intact or completely out of use. 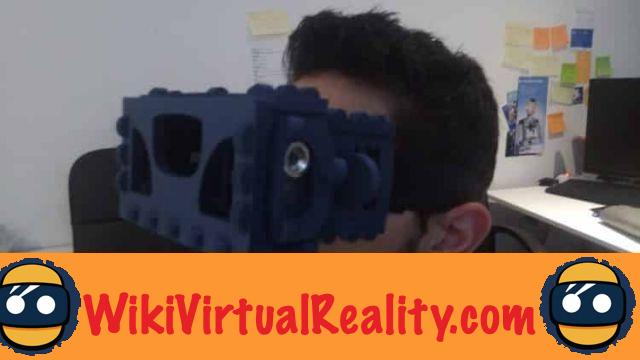 With its rectangular edges, right-angled edges, the Stooksy does not meet the usual design criteria of classic CardBoards. You can really feel the prefabricated side of the helmet on this side. The headset weighs only a hundred grams, which is very little compared to other CardBoards, this is a good point for the Stooksy VR XL. 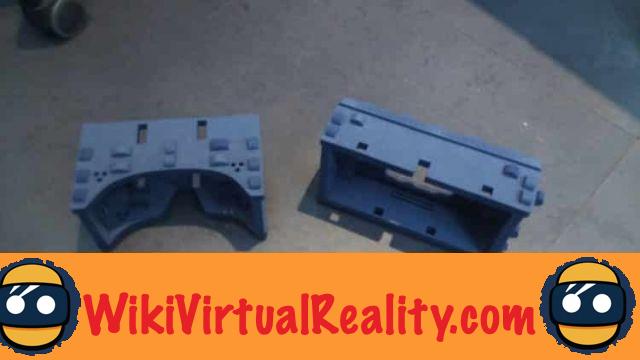 The helmet is moderately comfortable, it is clearly not a reference in the matter, no protective foam is sold with it. The material of the product makes the helmet sensitive to perspiration, and without protective foam. It is therefore better not to sweat too much, because your helmet could soak up the sweat of the users, which is not really comfortable or hygienic.

If you're hoping for volume control knobs, a power button, or whatever headphone level controls. As much to tell you right away, there is none, the headset is sold naked like a worm, it only has a small space to insert the smartphone you want to use. Nevertheless, despite its appearance, the Stooksy is of very good quality, the 360 ​​° videos are perfectly watchable. Which is a good point to credit this helmet. 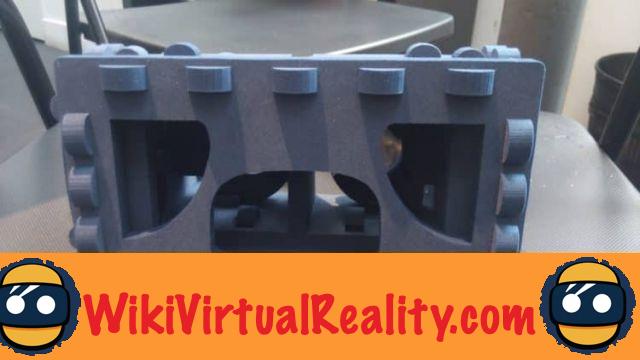 Lens adjustment is possible, but it will be done manually by directly manipulating the lenses of the helmet. The list of smartphones compatible with this headset is available at this address.

The Stooksy VR XL compared to the competition

The Stooksy won't compete with the Samsung Gear VR, Homido Grab, and even the classic Google CardBoard. Due to its rather special positioning on the market, its sales method (sold by piece) and its material mean that the Stooksy is isolated from the market. And its selling price of around 40 euros makes it a rather affordable helmet, but the price-performance ratio is not completely there. Especially when we know that the future headset from Google: Daydream, will be sold for twice this price, but with many more features, a much more refined design, and the Daydream will be a helmet that we will not need to mount . 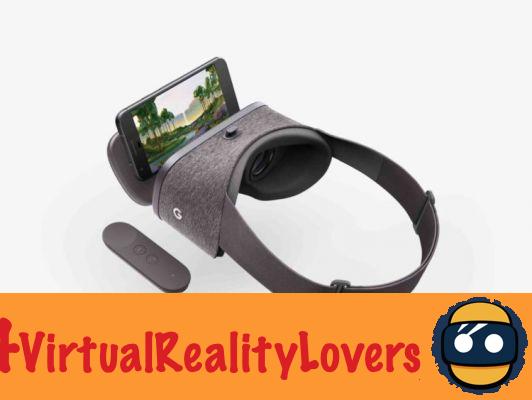 The Stooksy VR XL brings nothing new, except this concept of construction which is not new, since Google is already doing it with its CardBoard and its construction plans which are already available on the web.

Stooksy also sells three other headsets, and we were able to test another: the Stooksy Tab 7. As the name suggests, this large headset is compatible with 7-inch tablets. For our test, we used an iPad Mini. The helmet is made in the same way as the small model, a helmet made of the same material, assembled yourself. Only the size differs since the helmet is three times the size, and it is really imposing. It is so imposing that aesthetically it poses a problem, once on the head. 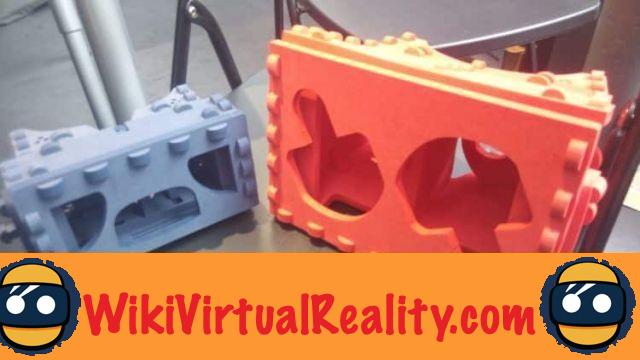 Like the Stooksy VR XL, the Tab 7 allows you to view 360 ° videos. Like the model for smartphones, no additional functionality has been added for this model compared to the previous one. But the big black point of this model lies in the quality of the videos viewed, they are impossible to watch as the quality of the transcription of the videos is horrible. The lenses are of very poor quality, and when watching videos, you can see the separation between the two lenses that is inside the helmet, and this completely destroys the immersion.

To conclude, the Stooksy VR XL is a good headset, with good video rendering, efficient lenses, the headset is light, but its material makes it vulnerable to sweat. The Stooksy VR XL is a headset that won't compete with high-end headsets like the Samsung Gear VR, or the like. As for the Tab 7, it has big gaps in video quality that prevent it from being used properly, and that's a shame, because CardBoards for tablets are quite rare, and Stooksy could have positioned itself in this market. with efficiency.

Putting on your helmet could have been a good idea, but the assembly time is far too long and taxing. Fortunately, the instructions are of quality, because this assembly would become torture otherwise. Stooksy can become a benchmark in terms of helmets to be mounted, but there is still a way to go both in terms of quality and design. It is clear that this helmet will be aimed more at young age than adults.

The Stooksy VR XL is a good headset available at an affordable price, but it will suit a younger audience more than an adult audience. The Stooksy Tab 7 is very tall and has a big problem with the lenses that makes videos unplayable. That's a shame.

Unboxing : The helmet will take a long time to assemble, but the user manual will help you because it is well made.

Design and Ergonomics: The design is quite childish, the material used for this helmet makes it unbreakable, but unfortunately very sensitive to sweat.

features: No additional functionality is to be reported on this headset, except for 360 ° compatibility and with bluetooth controllers. The helmet offers the bare minimum.

The competition: : The Stooksy does not play in the same court as the Samsung Gear VR but in its category, it has something to do with it.

add a comment from [Test] Stooksy VR XL and Tab 7: A helmet to build yourself