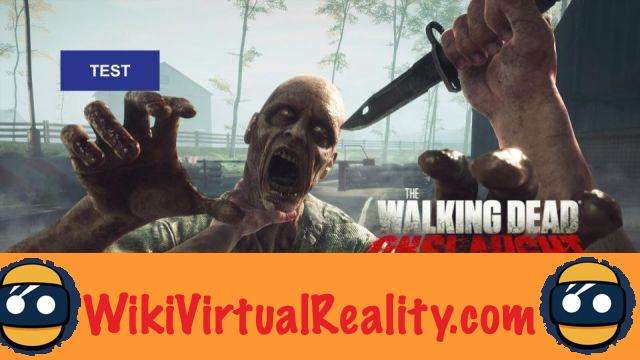 The Walking Dead Onslaught is the second thrill and horror game in the Walking Dead saga intended for PC and PSVR players. Its release has marked this year 2020 after that of The Walking Dead Saints & Sinners at the very beginning of the year. year.

aim at targetsshootrechargeflee the red zone

The Walking Dead Onslaught: a good dose of adrenaline

The Walking Dead Onslaught3 bullets in the head to eliminate them

the design of the characters and their voices is quite exceptional,Alexandria area represents the place where all the survivors gather

game user interface intelligently positions itself out of the way

This new game in the universe of The Walking Dead in virtual reality suffers from several faults which will certainly have an impact on his video game career. First of all, you can't help but compare it to Saints & Sinners released earlier in the year and very well received by the press and players. It's going to sound contradictory given the subject matter of the game, but Onslaught doesn't offer a vivid experience. It shows clearly the lack of resources for development. As a result, the final experience seems sloppy with lazy gameplay and an overly generic universe. In addition the title

One of the only things reminiscent of this happening in The Walking Dead universe is the presence of Norman Reedus. He manages by his talent to save the title from the debacle. In reality, everything is not to be thrown away. The Walking Dead Onslaught can still serve as an outlet if you do not want to think too much and you like to beat the zombie to death.

gameplay : Wobbly gameplay with a pronounced arcade edge that will not appeal to everyone.

Immersion VR : It could have been good, if the game's flaws weren't making the experience come out every time.

Graphics : The point on which this game defends itself. The horror of zombies is well represented.

Audio : A decent soundtrack. Dubs seem to have been done in a hurry.