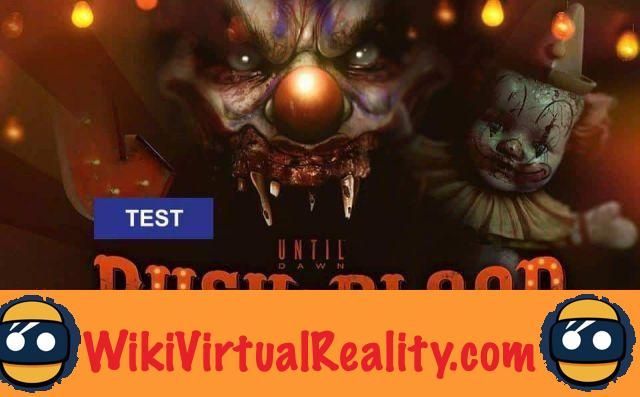 During the summer of 2015, Supermassive Games released the first iteration of Until Dawn on PlayStation 4. Until Dawn is survival-horror used the Slasher codes democratized by great classics such as Scream. A strong new license, the first episode was an honorable success for a brand new intellectual property. After the encouraging success of the first episode, Sony decided to trust Supermassive Games again to support the release of PlayStation VR. This is how we end up with a first person shooter on rails. We abandon the cinematic atmosphere of the first episode for a much more arcade form that uses the features of PlayStation VR. Until Dawn Rush Of Blood therefore completely embraces the experimental and new side dictated by virtual reality in order to show the possibilities of this one.

Lifespan: between 3 and 5 hours

The story of Until Dawn Rush Of Blood revolves around a sort of classic horror storyline featuring a mad scientist subjecting what one might think to be experiments on our hero. The latter finds himself immersed in universes populated by zombies and other ghosts which he must get rid of in order to survive. Like the popular Silent Hill series or more recently Evil Within, the game plays its narration on different levels of reality in order to lose the player and create an anxiety-provoking atmosphere. That being said, this scenario is clearly not the strength of the game, it is only a pretext. allowing the player to lose body and soul in the "Rush Of Blood", a sort of horrific amusement park spread over 7 levels which feature great classics of gore / horrific imagery, it goes from the slaughterhouse to the haunted house through the forest or the circus. Tall the references borrowed from these images are faithfully transcribed and give the player the impression of truly believing in them. Immersion is waiting for you. Until Dawn Rush Of Blood gives us the opportunity to live a visceral experience where virtual reality serves both the storyline and the gameplay thanks to PlayStation VR. 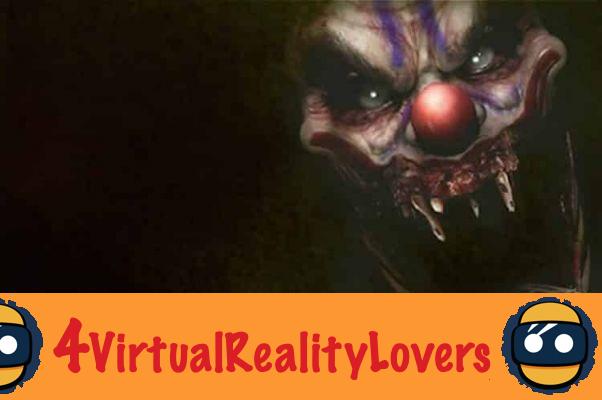 First of all, it is important to clarify one thing about the gameplay of Until Dawn Rush Of Blood, iYou absolutely need to equip yourself with PlayStation Move in order to have an optimal experience. Indeed, the gameplay with the controller is not recommended as it is not optimized. The game takes place on rails (both literally and figuratively) and allows the game to impose its own rhythm, moments of tension and genre-specific “jump-scares”. In PlayStation move, each hand gives the player the opportunity to hold a gun allowing him to shoot the various enemies that stand in his way. Until Dawn Rush Of Blood gives the player the opportunity to test both his reflexes, his nerves but also his flexibility, in fact, the recognition in space of PlayStation VR has allowed developers to place obstacles that players must dodge ... by moving, to the right, left or down, immersion guaranteed. Each of the 7 levels of Until Dawn Rush Of Blood lasts on average between twenty and thirty minutes, depending on your propensity not to die too often. In Until Dawn Rush Of Blood there are 4 difficulty levels which are all well set and allow you to spice up your game experience while strengthening the lifespan which is quite low. AT at the end of each level, you face a boss allowing you to use everything you have experienced during the level and put it into practice. The PlayStation Moves are very responsive, a bit like Batman Arkham VR (whose test you can find here). They give the impression of really holding firearms and their calibration is easy to do and change if needed. The gameplay is quite basic but the interactions allowed by PlayStation VR and PlayStation Moves bring some welcome niceties., like reloading weapons, which you have to deal with by shaking your Moves. Until Dawn Rush Of blood sometimes suffers from a lack of precision in aiming but it remains at the top of the basket what the motion recognition offers on the living room console.

Graphically, like any PlayStation VR game, Until Dawn Rush Of Blood does not stand out for its technological debauchery. Indeed, unlike Eve Valkyrie (read our review here), the game is clean but gives the impression of a dated game with a lot of alliasing and clipping. Despite everything, technologically, the game has to manage so many parameters (the movements of your PlayStation Moves with the PlayStation Camera, the movements of your head with the PlayStation VR) that the experience could not have been as efficient without these technical compromises. However, Until Dawn Rush Of Blood stands out for its immersion and aesthetic qualities. Indeed, by taking a lot of the bestiary and the sets of the original Until Dawn, the developers of Supermassive Games give a clear and controlled artistic direction to their game. The visual atmosphere is intended to be anxious to wish thanks to the enemies all more disturbing the each other. We go from the bloodthirsty clown to the ghost, passing by the inevitable zombies or even the most distressing disjointed puppets. The environments are rather varied if they are not original. (as said above, the game is greatly inspired by the culture of horror cinema with its codes and universes). In the end, while waiting for the release of Resident Evil 7 which risks setting the bar high enough in terms of survival horror in VR, Until Dawn Rush Of Blood offers beautiful moments of panic. The game taking place on the rails of a thrilling attraction, the developers also had to succeed in giving an impression of speed and vertigo, the bet is successful with a few moments of total madness on the rails of the wagon on which you spend most of your time. 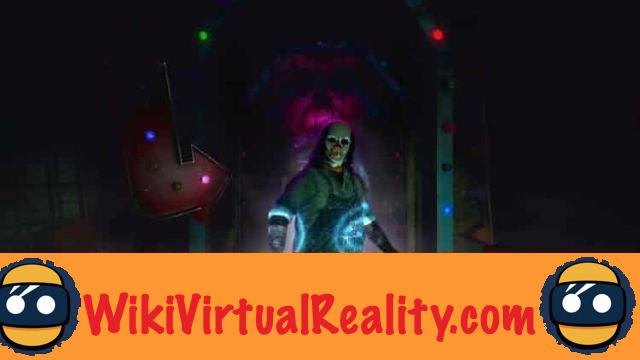 Another very important point in a Survival-Horror, the soundtrack. Indeed, to be really afraid in this type of game, the immersion must also be done via sound, Until Dawn Rush Of Blood understood it.. Firstly, the sound environment is intrinsically good, with baby cries, out of tune carousel music, voices whispering scary things in your ears or even the various appearances of the mad scientist turning into a kind of horror fairground. at the start of each level. Then, the 3D sound offered by a headset compatible with the PlayStation VR or the headphones provided with gives this cachet that you usually find in movie theaters and that greatly increases the effect sounds or music can have on you. The Jump scares are also well managed at the sound level with ever more abrupt and anxiety-provoking sound effects.

Until Dawn Rush Of Blood's lifespan is pretty short on its own but the 4 levels of difficulty and the scoring allowing to compare your performances with those of your friends increase the lifespan if you have the ambition to finish the game with all the trophies. The 7 levels last an average of twenty minutes, you can finish this game in less than an afternoon. That being said, the game being found for a small twenty euros, you can buy it if you treat yourself to the PlayStation VR with the PlayStation Moves.

Until Dawn Rush Of Blood is quite pleasant in terms of visual comfort, apart from some dizziness when your wagon is moving very quickly, we find ourselves in front of a games with the least motion sickness in VR. The PlayStation VR responds really well to your head movements and is very good at latency.

Our opinion on Until Dawn Rush Of Blood

Until Dawn Rush Of Blood is one of the great experiences released on PlayStation VR since the release of the device. Indeed, the Survival-Horror being particularly conducive to a virtual reality experience, we end up with a game to visualize the possibilities offered to us by the virtual reality headset from Sony. Even if the service life is not very long, its low price and its experimental side will allow you to discover the Playstation VR in the most beautiful way. 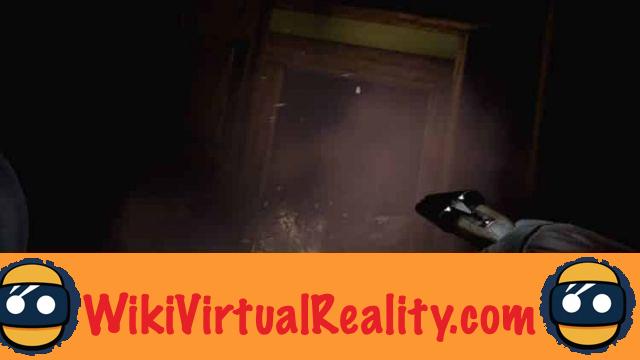 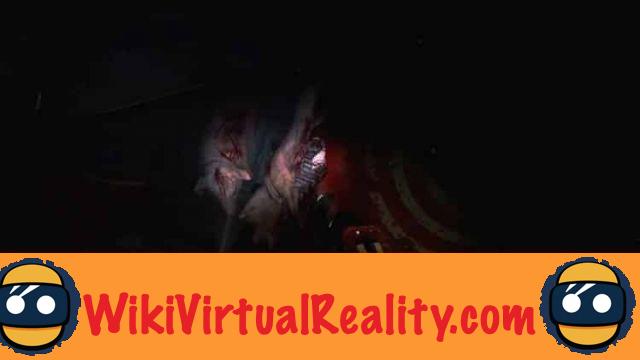 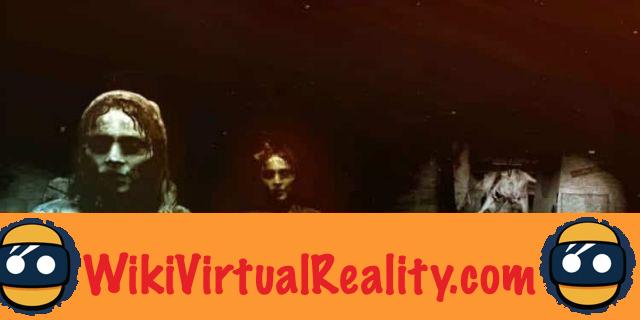 add a comment of [Test] Until Dawn Rush Of Blood : Sensations fortes garanties.