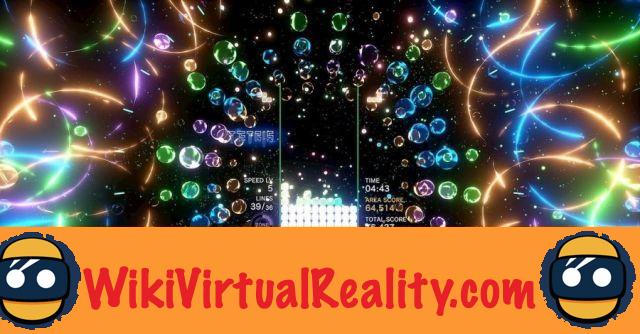 For some, it's an old fashioned thing. However, the concept of stacking bricks at a breakneck pace continues to appeal to players. Tetris Effect was released on PlayStation 4 last November. The psychedelic looking puzzle supports PlayStation VR.

On July 23, 2019, the title developed by Monstars and Resonair will be available on PC. It will support the HTC Vive and the Oculus Rift, as well as their respective controllers. Just like the console version, those who do not have VR headsets can try their hand at the title. They will be able to increase the resolution to 4K. Note that different graphic parameters will be adjustable in order to adapt the effects of particles, texture filters, etc. In addition, the number of frames per second is not blocked as on PS4.

Tetris Effect offers over thirty levels and over ten different modes. If the gameplay remains an improvement of the great classic, the visual effects and the immersion provided by VR make the game particularly eye-catching. New ways of stacking bricks are often surprising. Plus, adaptive music changes based on your actions.

Some will regret that Tetris Effect is an Epic Games Store exclusive. Indeed, the studio behind Rez has no doubt accepted the proposal of the Fortnite dads. Already in pre-order, the platform gives you a limited offer until August 6. The price drops by 20% (26,39 euros instead of 32,99 euros), you get 10 4K wallpapers (blah) and 7 (cool) music tracks composed by Noboru Mutoh, to whom we owe the soundtrack of Rez Infinite.

The importance of SideQuest for the Oculus Quest ❯