There are many reviews of the best VR games. This time, we offer you The best VR game (this is still subjective), according to our editorial staff, for the different genres that exist in gaming. 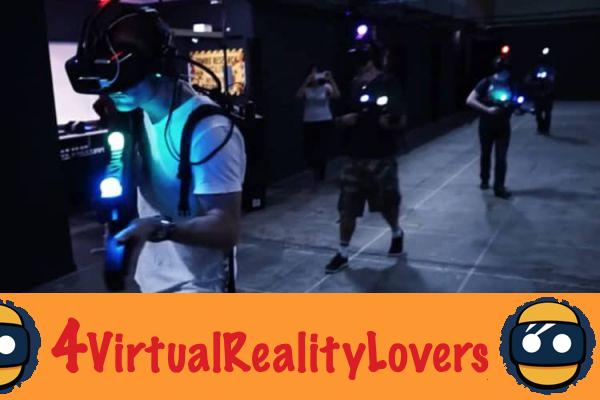 Robo Recall is an arcade game that also uses first person shooters and Shoot'em Up. Developed by Epic Games, this VR game is considered the best VR arcade game. It is only available on Oculus Rift.

Lone Echo / Echo Arena: to defy the laws of gravity

Lone Echo and its cousin Echo Arena are two games developed by Ready At Dawn for the Oculus Rift. Using a zero gravity movement mode, a little confusing at first, these two games, which combine adventure, exploration and simulation, have brought completely new gameplay to VR.

Very well served by a very high quality audio, Rez Infinite plunges you into a psychedelic universe. Make no mistake, this is a real shooter. Available on PlayStation VR, Oculus Rift and HTC Vive, this indie action game is well worth a look.

Sprint Vector is a racing game that's more akin to Mario Kart than Gran Turismo. The players are on roller blades, and engage in frantic multiplayer races on different circuits taking place in various environments. The great strength of the game is its unique gameplay.

To move, the player must swing their arms back and forth as quickly as possible. The The game is therefore very sporty, especially since it is regularly necessary to bend down to avoid certain obstacles. The cartoonish graphics, wacky characters and various bonuses to collect just add to the fun. This title is available on Steam, Oculus Rift and PlayStation VR.

Who has never dreamed of taking the controls of a spaceship sailing in the cosmos? With virtual reality, it is now possible. Initially offered on PC, Elite Dangerous is fully playable in VR and offers players to trade, explore and engage in combat multiplayers across the universe.

It is a game with a depth unmatched in the VR gaming market, that can keep you busy for hundreds and hundreds of hours… If you have the courage to go for it! The game is available on Steam and Oculus.

Available exclusively on PlayStation VR, Astro Bot quickly established itself as the top rated and best selling game of the Sony platform. And for good reason ! This title is full of good ideas masterfully applied. The player takes control of a small robot and must travel through different planets to find his fellows and repair their mother ship.

With its original and varied gameplay, its diverse environments and its childish side, Astro Bot Rescue Mission recalls Super Mario 64 and lays the foundation for the VR platform genre. A title to discover exclusively on PlayStation VR.

Resident Evil VII: Biohazard is recognized as the best virtual reality terror game. It's hard not to have a cold sweat and bursts of fright with this survival horror. Available on PlayStation VR, it is one of the most played VR games.

With Marvel Powers United VR, you will be able to put yourself in the shoes of your favorite superheroes, such as Spiderman, Captain America or Rocket. Well served by sumptuous graphics, the game allows you to use the powers of each of them to take down enemies. Marvel Powers united Vr is only available on Oculus Rift and becomes one of its benchmark exclusives.

SuperHot VR is a very nice surprise. This is not a simple shooting game. Here, you will be able to use the movements and slowdowns found in the movie The Matrix. Available on PlayStation VR, HTC Vive and Oculus Rift, you will be amazed by the effects.

Beat Saber has landed like a UFO in the world of virtual reality games. Very quickly, the game conquered a large audience and became a real phenomenon breaking sales records.. Released in early May, on Oculus Rift, HTC Vive, and Windows Mixed Reality compatible headsets, the game quickly rose to top rated and sales exploded. The concept is simple: cut cubes in the direction indicated and in rhythm with the music. Simple and sharp. The cubes appear according to the rhythm of the music, they must then be sliced ​​in the direction of the arrow while avoiding obstacles. With a sword in each hand and well-paced music the exercise can quickly become quite physical and make you sweat ...

Beat Saber now allows you to add your own music and  will be available by the end of the year on PlayStation VR. The game is sold for 19.99 euros on Steam VR.

Firewall Zero Hour was released at the end of August on PS VR and its success was immediate. In just a few days, the VR game has become the most downloaded game of the month, dethroning big names from the podium. This is a game that will ask you to set up tactical combats with various guns. Collaboration with other players is particularly important because it is not a question of shooting at all costs but rather of developing group tactics.

Firewall Zero Hour is currently only available on PlayStation VR. It is possible that in the future the game will switch to other virtual reality headsets.

Developed by Ubisoft, Transference wants to remove the border between video games and cinema. Briskly mixing the narrative of a science fiction film in the form of a psychological thriller and the interactivity of virtual reality video games, the result is particularly successful. In the form of a survey, the player will explore the memories of different members of the same family. Very successful even if we regret the lack of drama and suspense.

The game alternates between the images of the game and those of a real fiction filmed with actors. The visual effects and the soundtrack are particularly successful. The atmosphere is quite scary and worthy of a true psychological thriller. Available on PC and console, however, the game takes on its full dimension in virtual reality. Transference is available on Oculus Rift, HTC Vive, and PlayStation VR. However, some players regret a slightly high price (25 euros) for a fairly short lifespan. since it is that of a classic cinematographic production, ie about 1 hour and a half.

Gorn: the most brutal and savage game in VR

Gorn is a gladiatorial arena fighting game. This VR game gives pride of place to violence, gore and brutality. The only limit to this carnage ... your imagination. Available on HTC Vive and Oculus Rift, the game is developed by Free Lives.

Skyrim VR is, for many, THE best virtual reality game out there. Very neat and successful, the game is a huge success even if it remains limited by current technology. Available on PS VR, Oculus Rift and HTC Vive, this VR adventure game will delight RPG enthusiasts.

Very successful, the FPS Fallout 4 is acclaimed for its adaptation in virtual reality. No doubt, this is a AAA game. FPS is available on HTC Vive and Oculus Rift.

This real-time strategy game is considered the best in its class. Able to be played alone or in pairs, Brass Tactics is only available on Oculus Rift. A very well designed RTS classic.

Doom VFR: the gore and violent universe of Doom finally in VR

Old gamers and retrogaming enthusiasts all know Doom. This ultra-violent and particularly gory FPS. The adaptation in VR is particularly successful. The game is available on PS VR and on HTC Vive.

Onward is a classic but particularly successful war game. This simulation is the best at the moment. Onward is available on HTC Vive and on Oculus Rift.

The Climb: the best climbing simulation in VR

Even if you are afraid of heights, The Climb will make you love climbing. This simulation looks more like a VR experience than a real virtual reality game but is definitely worth a look and a try. Athletes will love it. The Climb is available on HTC Vive and Oculus Rift.

Available on HTC Vive, Pavlov VR has brilliantly succeeded in the action game challenge with this very successful multi-player shooter. Developed by Davevillz, this game is particularly addicting for fans of the genre.

Not yet tested by our teams but you can discover Pavlov VR here.

add a comment of The best virtual reality games: top by genre on PS VR, Rift, Vive and Go