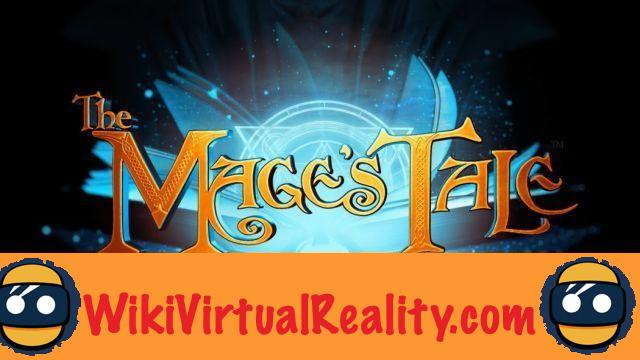 Scenario from The Mage's Tale: a classic but effective scenario

In The Mage's Tale, the player embodies a sorcerer's apprentice, whose master Mage Alguin is mysteriously captured by the evil sorcerer Gaufroi. In order to find him, the young disciple will have to embark on a long-term adventure and brave a thousand and one dangers, guided by Alguin's servant, a goblin as arrogant as he is wacky. It will pass through different environments, ranging from the ancient crypt to the infamous sewers. As he progresses, the player obtains new spells, and learns to master the different elements.

If The Mage's Tale's narrative is not necessarily very original, an omnipresent touch of humor and second degree gives the title a unique atmosphere. Thus, after spending several minutes solving a puzzle to reveal a secret staircase, the player will be taunted by the goblin, extolling the merits of levitation. You will understand, the tone is light, and this family game will delight young and old. Note however that the dialogues are in English, without subtitles, and that it is therefore necessary to understand the language well to follow the story.

Designed specifically for Oculus Rift, The Mage's Tale exploits the Oculus Touch in a masterly way. The interactions are very intuitive. That he be it opening a door, pulling a lever, stirring a pot, grabbing a sword or drinking from a gourd, the player uses his hands in a very natural way. Likewise, the movement system is very successful. The right Touch joystick allows you to teleport, as in most VR games in first person. This joystick also allows you to turn, in order to stay in front of the sensors. However, it is possible to use 360-degree Room Scale tracking to physically turn without losing signal. The joystick of the left controller allows it to move in jerks. Surprising at first, this way of moving allows you to move more or less naturally without feeling the harmful effects of Motion Sickness.

If he's possible to grab swords and other weapons to fight in melee, the combat system of The Mage's Tale is mainly based on the use of spells. Again, the controls are very simple and intuitive. A button press allows you to choose which spell to equip, then the trigger lets you cast the spell. With their right hand, the player can also use an energy shield to protect themselves from enemy attacks. In general, this combat system is reminiscent of that of The Unspoken game, also available exclusively on Oculus Rift.

At the start of the game the player unlocks the basic spells: fireball, chain of lightning, ice javelin ... each of these spells is based on an element, and has its specificities. For example, Chain Lightning deals damage to multiple enemies, but recharges more slowly, while Ice Javelin only hits one target but can also slow them down. The most interesting aspect of The Mage's Tale gameplay is the ability to "forge" hundreds of spells through a crafting system. At any time, the player can teleport to a workshop by joining their two hands above their head.

Within this workshop, it is possible to mix different ingredients in a large cauldron to create spells. For example, by mixing the Ice Javelin Artifact with a Bouncing Orb, the player will be able to create a Bouncing Javelin. Hundreds of combinations are possible, as long as you have the orbs available. These orbs are hidden in hidden chests, which can be discovered throughout the game by solving optional puzzles or finding secret passages.

Indeed, if it is possible to browse the game in a straight line, many puzzles are scattered throughout the adventure. Some are quite accessible, others are very complex. These puzzles are reminiscent of those from the games of The Legend of Zelda saga. This involves, for example, triggering mechanisms, or using the spells of different elements to interact with the environment. For example, the player can melt a block of ice with a fireball, or on the contrary freeze a lava flow to reveal a passage.

To each defeated enemy, the player receives experience gems that fill a crystal located on their glove. Once the gauge is full, all you have to do is press this gem to progress one level. Each level allows the player to choose between two upgrades. For example, it is possible to choose between an increase in life points, or a reduction in the cooldown of spells. Thus, the player can develop his character according to his preferences, and specialize to become extremely powerful. Like traditional role-playing games, The Mage's Tale gives the player a very pleasant freedom of customization.

The Mage's Tale lifespan: a lifespan extended by optional puzzles

InXile Entertainment promises around 10 hours of gameplay for The Mage's Tale. Veteran players, however, will finish the adventure faster. The many optional puzzles extend the life, and the ability to customize your character guarantees some replayability. Like all RPGs, The Mage's Tale is less interesting when completed, but will likely leave you with fond memories. The title lays the foundation for VR RPG on Oculus Rift, and all that's left is to wait until those foundations are used to spawn massively multiplayer role-playing games that can suck entire years out of your existence. 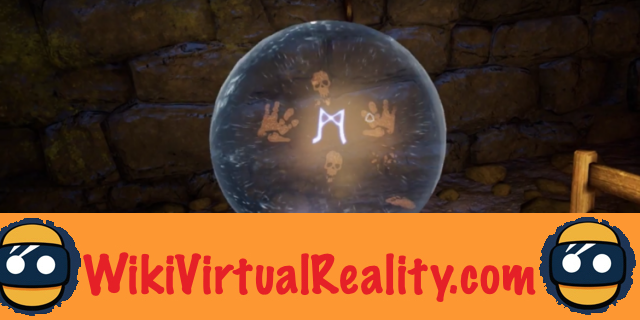 The graphics of The Mage's Tale are very neat. Despite a cartoonish artistic direction, the light effects of the spells are stunning, and the whole, very colorful, is a feast for the eyes. On the other hand, the character animations seem a bit messed up, and the mouth movements don't seem to match the lyrics. The voice dubbing are on the other hand very well made, even if the little goblin will annoy more than one. The soundtrack is excellent, including epic music that plays during battles. Special mention to the song played during the loads.

Immersion of The Mage's Tale: an immersive and captivating experience

The Mage's Tale proves to be very immersive thanks to the Oculus Touch controllers and the graphic quality of the title. The player will often have the impression of being really on the edge of a precipice, or will find himself attempting to place his controller on a virtual table as if the piece of furniture were indeed facing him. The feeling of being able to cast spells is truly exhilarating.

Comfort of The Mage's Tale: a very comfortable experience

Le movement system avoids any problem of motion sickness. The experience is therefore very comfortable. However, the player will tend to accidentally turn and lose the signal from the sensors. It will therefore be necessary to lift the helmet to check in which direction it is. To avoid this problem, it is necessary to turn using the joystick of the right controller.

Conclusion of the Mage's Tale review

The Mage's Tale isn't perfect, but finally lays a solid foundation for VR role-playing games. Unlike a title like Vanishing Realms, this game gives the user the flexibility to customize their character, which is a key part of traditional RPGs. The proposed experience is intuitive, fun and immersive. For fans of role-playing games, this is a title to acquire without hesitation, if only to visualize the possibilities offered by VR for this kind of games.

Scenario: The Mage's Tale has a simple, classic fantasy story with a little humor.

Playability:Intuitive gameplay, masterfully exploiting Oculus Touch controllers, with a crafting system leaving the player the freedom to customize their character.

Lifetime : The game lasts about 10 hours, but the customization allows you to start the adventure again.

Immersion: An immersive and captivating experience.

Comfort: No comfort problem to report.

Top 20 things to do with virtual reality ❯