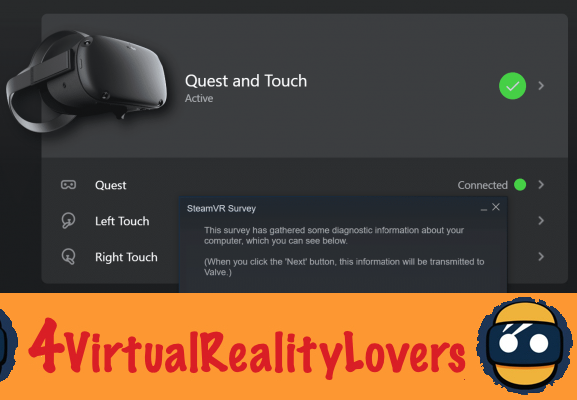 A few weeks ago, the figures unveiled by Steam Hardware were considered surprising by many specialists. Valve has just corrected this data as one would expect.

The news fell like a hammer at the beginning of January. The study given by the gaming platform showed a drop in usage on all virtual reality headsets. The new data is now more consistent and shows a noticeable increase in the Oculus Rift S. The Oculus Link could be the reason.

With the old figures of Steam Hardware, we found in particular a very important use of Chinese users who could have falsified the data, but that disappeared. From now on, the most significant growth can be attributed to the Oculus Rift S with + 0,06%, followed by the Valve Index with + 0,02% and the Oculus Rift with + 0,01%. For the Oculus Rift, with 0,21% of the total, this concretely means that one in 500 Steam users uses their headphones. We can perhaps see the effect of Black Friday during which the helmet was sold off.

At the same time, games like Asgard's Wrath and Stormland may have also contributed to its success and that of the original Rift.. The data is still to be taken care of due to another parameter, however. Due to the "Link Mode" of the Oculus Quest, it is possible that Steam mixes the Rift S and the Oculus Quest in its data. On the other hand, we note that the fall continues for the uses of headsets compatible with Windows Mixed Reality.