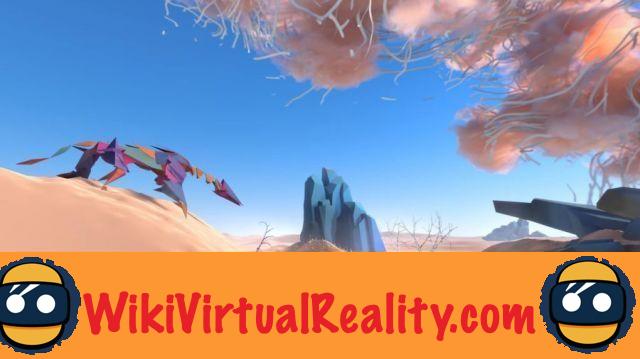 Paper Beast released not long ago on the Sony console was until this announcement exclusive to PSVR. Thus, it is through a tweet that the Pixel Reef studio unveiled the good news. The game is coming to PC this summer on the main VR platforms namely Steam, Oculus and Viveport. This means that the experience will be Compatible with HTC Vive, Rift and Rift S headsets from Oculus and the Valve Index. No details, however, for Windows Mixed Reality headsets that are not mentioned.

Paper Beast is the brainchild of independent studio Pixel Reef founded by Eric Chahi. This video game designer is entered into legend thanks to his masterpiece Another World released in 1991. A small revolution at the time, it introduced new methods in the narration of the story and used a method very little used for animation. And if her new production does not have quite the same ambitions, she still intends to offer a special experience.

Indeed, although qualified by the term video game, Paper Beast is different from other titles and does not offer traditional gameplay. Rather it isan immersive story about fantastic creatures and the dreamlike world in which they evolve. Here, exploration takes precedence and the vast universe is a place dedicated to experimentation, where you can give free rein to your imagination.

In its announcement, Pixel Reef specifies that the PC version of Paper Beast will be embellished with some new features. This concerns as well the quality of the graphics revised upwards, the gameplay adapted to the game on PC or the way of moving. In addition, the game will also welcome new creatures and plants, as well as new items. The “Sandbox” creation mode will be extended.


Scheduled for this summer, it is already possible to add Paper Beast to its list of desired games on Steam. Note that he received very good reviews from the press and players when it was released on the PSVR last March.