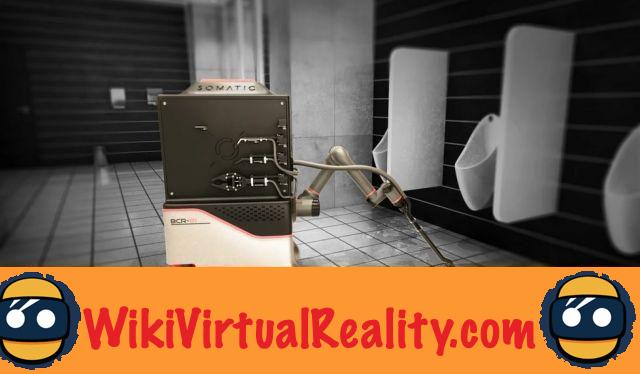 The main goal of automation is to enable humans to free themselves from the most dangerous, the most off-putting or simply the most ungrateful labors. So, cleaning toilets seems like an urgent task for robots.

This is the raison d'être of the first robot created by the startup Somatic, based in New York. Company CEO Michael Levy was inspired by his own professional experience. In his youth, he spent several years working in his grandfather's restaurant and was notably in charge of toilet maintenance.

This is how he came up with the idea of ​​a robot capable of automating this task. Washroom cleaning is an ideal application for robotics and AI, he says, because all commercial toilets built after 1994 in the United States are based on the same standard for compliance with the Americans with Disabilities Act (ADA).

American toilets therefore all have the same design, and a robot therefore only needs to train in one place to be able to be deployed anywhere else. To simplify the process, and allow the machine to train without disturbing visitors, Somatic had the ingenious idea of ​​training him in virtual reality. A practice similar to Toyota which trains domestic robots in the RV.

The machine, described as a “mini fridge with a robotic arm attached to the front”, therefore learns the joys of the trade through a VR simulation. Gradually, he discovers where to spray and wipe chemicals, and where to vacuum and dry.

As its creators humorously describe, this simulation is arguably "the worst video game in the world". However, this project proves that VR can be used both for training human employees and for training robots.

To find your way around and navigate in space, the robot is equipped with various sensors and in particular a lidar system. He is able to clean the room and then go to recharge his reserves of chemicals. Each day, the machine can do about eight hours of cleaning. She is even able to open doors and take the escalator to move around the building.

The Somatic robot is mainly intended for airports, casinos, offices and other establishments with large toilets. Companies will be able to rent it for around 1000 dollars per month, after a trial period. Several private companies are already using it to wash their offices ...

The history of VR in 7 steps: from science fiction to your living room ❯