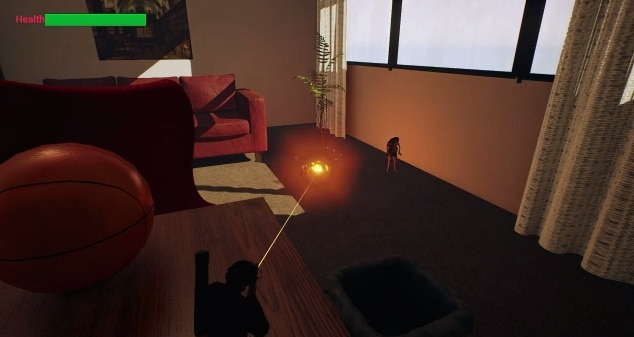 In,it's about killing zombies, of course. However,the places are, how to say,a little disproportionate for the characters. It turns out that the game takes place in a house, very normal, but ... with miniaturized characters.

Imagine you and awkward zombies shrank like the movie did. You immediately see what kind of mess you got yourself into.

Usable objects in the room

The game is well regarded as a shooter, but will allow you to use objects in the room to knock out zombies. According to the creator of the game, for example:

It must rather be said that the idea is interesting, because indeed, there is really a good vein to be exploited in this universe, which would make the gameplay very rich and dynamic. Who wouldn't love to see a cat tumble into the room to save our skin? Somehow kick the ball to hit the zombies? Hide behind curtains or in a shoe? There are so many possibilities that can prove to be of help or on the contrary a threat to the player and / or the zombies.


Here is a video of a shoot phase:

In fact, you will have noticed,the dimension of the elements may be the key to this game. Hopefully the creator manages to master this part to get an epic experience.

A demo will be coming soon to Oculus Share, and the full game is slated for after the commercial version of Oculus Rift is released.

add a comment of [Video] Household Heroes, from “Honey, I Shrunk the Kids” with zombies in addition