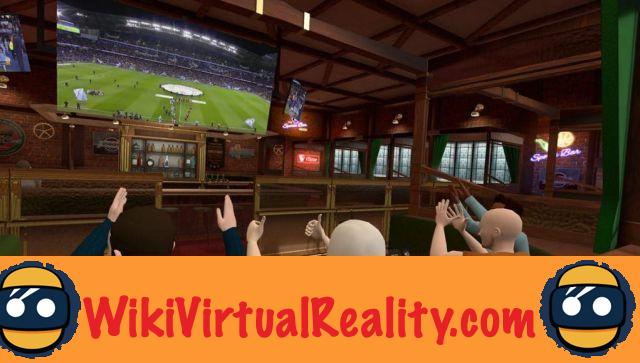 With its last update available since Friday, the VR chat platform vTime now allows its users to watch videos together.

However, the option is currently limited to watching football matches. And even for the most soccer players, the offer may be too limited since only a few Manchester City fixtures footage are available. Having said that, this is only the start. Thus, the studio behind the application is already announcing partnerships with 7 other clubs such as New York City or Melbourne City.

In fact, users will be able to enjoy this new content in new environments where matches are watched on virtual TV screens. Of course, the idea is to recreate the atmosphere you can find in cafes at the time of big meetings.

More vTime videos in the future?

We can also start hoping for the arrival of other video content of the kind in the future. However, this first sporting experience will have to prove fruitful for that to happen. In any case, Manchester City fans are surely in heaven.

However, we must admit that vTime is not really the best platform to enjoy videos, especially sports matches. Indeed, we remind you that avatars cannot stand up in this application. Forget the moments of euphoria when everyone gets up suddenly after an unexpected last minute goal. Compared to other platforms like VRChat or Rec Room, the interface of vTime remains decidedly simplistic.

And the two new environments do not change this fact. One is a pub decked out with TV screens, the other a kind of Roman amphitheater with a giant screen. In any case, these improvements will be available on all devices supported by the application. We cite the Oculus Rift, Oculus Go, Oculus Gear VR and PC VR headsets, Google Cardboard as well as mobile devices equipped for AR.


You can take a peek at how the videos appear in vTime with this teaser: