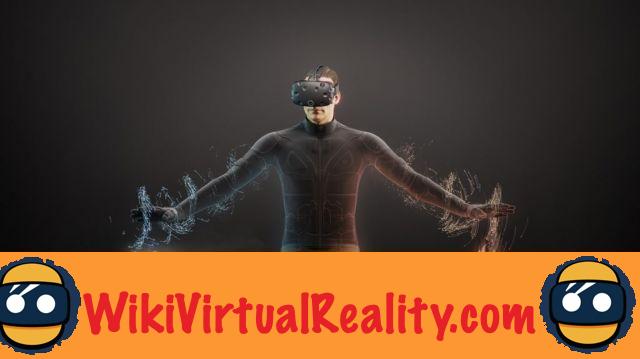 VR headsets allow the user to immerse themselves in virtual reality. Once equipped with such a device, the wearer perceives the virtual environment at 360 degrees all around him as he is used to perceiving the real world. Thus, his sight is deceived in the same way as his hearing thanks to the spatialized 3D audio. The senses so duped persuade the mind that virtual reality is reality.

Accessories like Oculus Touch motion controllers also make it possible to reinforce the illusion, by letting the user use their hands in a more or less natural way to interact in VR. However, for the user to truly feel like transported to another world, VR headsets are missing one crucial element: stimulation of touch.

Fortunately, some accessories can already fill this gap. You may already be familiar with VR gloves, or haptic gloves, which allow you to feel the contact of objects that you touch with his hands in the VR, or even their weight and texture. In this article, however, we will discuss another category of accessories: VR haptic combinations.

These sets, which dress the entire body of the user, allow to receive a haptic feedback on the entire body. Thus, through vibrations and other artificial force effects, the user feels the sensation of touch and touch in the real world depending on the events that occur in the VR. From the gentle morning dew that moistens the air to the impact of a 45 caliber bullet in the chest, a VR haptic suit allows the wearer to feel all the sensations of their avatar. Here are the top of the best models.

The Teslasuit is a VR haptic combination based on an electro-tactile haptic feedback system. The sensations of contact are transmitted to the user's body through neuro-muscular electrical stimulation. Thus, the functioning of this panoply is similar to that of the human body. This technology is already widely used in the therapeutic field.

It is possible to feel all the sensations, from the softest of caresses to the most violent of impacts. However, the manufacturer has chosen to limit the power of impacts to the user's own strength For safety reasons. Developer versions have already shipped, and the consumer version is expected for 2019.

Created by NullSpace VR and funded through a Kickstarter campaign, Hardlight is not a haptic suit, but a haptic jacket. She does not therefore covers only the upper part of the body of the user. This jacket has 16 cushions to receive haptic feedback in the torso, back, arms and shoulders.

These cushions can be activated by any software integrated with the NullSpace VR API offered by the company to developers. Several VR games, including Sairento VR, support the Hardlight Suit. In total, the company is in partnership with 27 game developers and plans to announce new partnerships with several big names in the video game industry in the near future.


The jacket also offers 117 vibration patterns, and allows developers to create their own patterns to match their content. So, if you use a gun for example in a VR game, the vibration you feel in the arm will be similar to the feeling of recoil caused by a gun in the real world. Thanks to inertia sensors making it possible to detect rotational movements, the jacket is also capable of detecting the user's orientation in relation to the virtual world.

The latest version of the Hardlight Suit, Mark III, unveiled in December 2017, offers additional haptic feedback features sensors to detect the position of the wearer's torso and arms to improve orientation detection. In the future, the manufacturer plans to integrate a thermo-electric tray system to allow users to feel the sensations of hot and cold.

Unlike the other wetsuits in this top, the South Korean TEGway does not focus on haptic feedback. The TEGway ThermoReal is a thermoelectric suit allowing to feel the temperature in virtual reality. She can quickly heat or cool between 4 and 40 degrees Celsius.


So you can feel the heat of the fire or the cold of the blizzard during your excursions in the RV. This panoply is even capable of simultaneously produce hot and cold in different areas on the same surface, allowing to simulate a pinch to produce a feeling of pain. It is not yet clear when and at what price this technology will be offered to the general public.

bHaptics TactSuit: a VR haptic suit lined with a mask

Presented as part of the HTC Vive X Demo Day 2017, the bHaptics TactSuit is a set composed of a haptic jacket, haptic sleeves, but also a haptic mask. Thus, the user not only feels the sensations of contact at the level of the torso and the arms, but also of the face.

The set includes a total of 87 points of feedback powered by vibration motors. Seven of these actuators are located on the face, 20 on the front of the jacket, 20 on the back, and 20 on each sleeve. With these many feedback points, game developers can precisely program haptic feedback for a more immersive experience.

Developers can indeed use the dedicated haptic editing software, which works in conjunction with Unity, to thoroughly customize the TactSuit's haptic feedback experience. The patterns, vibration trajectory, vibration strength of each point can be adjusted through an intuitive interface.

Already used in Lotte World theme park in Seoul, South Korea, for a horror game called Zombie Attack, this combination is attracting many users. The TactSuit is already available for $ 549, but only businesses (arcades, amusement parks) can purchase the full combination. Individuals have to be content with sleeves.

Axon VR is determined to allow users of virtual reality headsets to immerse themselves 100% in VR, and do not go with the back of the spoon. HaptX is a haptic combination allowing to simulate the touch, but also the temperature, vibrations, movements, shape and texture of virtual objects.

The company also offers the HaptX Skeleton, a very light exoskeleton allowing in addition to feel feelings of physical strength. Unfortunately, for the moment, we do not know when this set will be marketed. Note that the manufacturer is also at the origin of the haptic glove HaptX Glove.

There is also a pair of fake tits, placed at the level of the torso, to allow the user to feel the chest of the busty creatures that they contemplate in the VR. A combination reserved for a very specific use, which will also give you a very special look. Only works with the Samsung Gear VR. Available for approx. 400 dollars in Japan.

Synesthesia Suit, a haptic jacket for the Rez Infinite game

Specially created for the Rez Infinite game, a musical shooter, the Synesthesia Suit includes 26 actuators distributed over the user's entire body. These actuators vibrate in rhythm with the music. Depending on the instrument played in the game (percussion, strings, etc.) the sensation provided differs.

In addition, the jacket has LEDs that illuminate in rhythm and change color according to the sounds. This combination allows the user to experience music not only with their hearing, but also with their touch and sight. The name of this panoply thus refers to synesthesia, a neurological phenomenon of sensory association which affects a small part of the world population. However, with the VR version of Rez Infinite, the visual dimension loses its interest since the user has his helmet in front of his eyes. Remember that Rez Infinite is a game that originally appeared on Dreamcast and PS2 in 2001.

This high-performance VR haptic combination is created by The Void, the world leader in VR theme parks to which we owe the Star Wars: Secrets of the Empire attraction. This jacket works with VR Rapture headset, also created by The Void.

Lightweight and adjustable, this jacket impresses with its precision and the fluidity of the haptic feedback it delivers. Four types of haptic feedback are used, in order to allow different sensations to be experienced depending on the context. A laser shot or a revolver bullet will therefore not have the same effect at all. It is unfortunately impossible for consumers to get hold of this jacket, but we can imagine that its price greatly exceeds that of other VR haptic combinations. However, the Rapture Vest offers a good glimpse into the future.