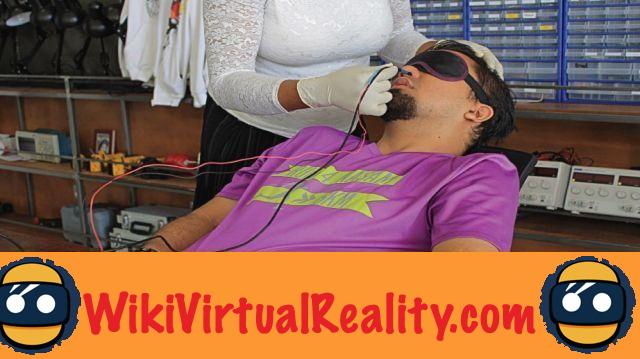 La virtual reality is to fool the senses, in order to convince the brain that this is the real world. However, at present, the VR headsets available on the market simply stimulate sight, hearing, and, to a lesser extent, touch. The illusion is therefore still far from perfect.

Stimulation of smell and taste in virtual reality is therefore the next step. Several companies and researchers have already started to explore these avenues. This is the case of the pornographic site CamSoda with its OhRoma mask which simulates body odors, of the Vaqso accessory intended for various VR headsets, or even of the Pimax 8K headset for which an odor simulation extension is in development.

However, all of these solutions are based on the same principle. It's about insert chemical cartridges into accessories that you connect to a computer or a smartphone. These are commands that then activate the relaxes of these substances which then mix to produce an odor.

Researcher Kasun Karunanayaka of the Imagineering Institute of Malaysia, meanwhile, wants to create a system that allows generate odors only with electricity. Its idea is to electrically stimulate cells linked to the perception of odors in order to send information directly to the brain.

Along with his team of researchers, Karunanayak carried out an experiment in which 31 volunteers participated. Each of them had to stick a flexible cable through the nose. This cable was connected to a small camera and silver electrodes. The camera allowed the researchers to navigate the nasal passage in order to bring the electrodes into contact with the cells of the olfactory epithelium, located about 7 centimeters deep in the nostrils.


It is these cells that transmit information from the olfactory nerve to the brain. Usually, they are stimulated by chemicals that attach to receptors, but the team of researchers activated them. using an electric current. They experimented with different amounts and frequencies of current in order to find the best way to produce sensations of smell.

Most of the volunteers perceived odors of perfume or chemical odors, according to their own descriptions. Some have also perceived fruity, sweet, toasted mint, or woody scents. This was a first experiment, and the next step will be to check whether certain stimulation parameters are linked in a stable way to certain specific odors. There could also be differences related to age, gender or morphology.

In any case, the main challenge is to find a way to produce these artificial flavors without having to stick a tube in the nose of the users. Because, the experience was very uncomfortable for most of the volunteers and the majority of them gave up after just one try.

The alternatives considered would be a smaller and more flexible tube, or direct stimulation of the brain without going through the olfactory cells of the nose. Participants' brain activity will then be scanned to compare their reaction to artificial odors with their reaction to real smells like that of a rose. If the same regions of the brain react to these two types of stimulation, it will be these areas that will be targeted by future research.

This technology could be used for the VR headsets of the future, in order to breathe odors in the virtual world. It could also be used to treat people with odor disorders. However, Kasun Karunanayaka's real goal is to create a "multi-sensory internet" by means of which it would be possible to send each other stimuli of all the senses as one sends textual messages to each other today. Previously, in previous experiments, researchers also managed to send chickens remotely hugs, electric tastes, or digital kisses.