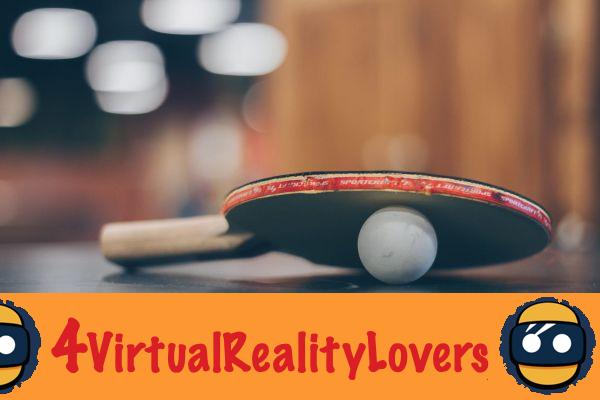 What if you could become a champion in the real world by training in virtual reality? A recent study by researchers at the University of South Australia suggests that this is indeed possible.

To carry out this study, the researchers called on 57 amateur table tennis players. This sport was chosen because it requires skills necessary in most disciplines such as visual attention, rapid decision-making or even interception skills. Half of the players were trained in virtual reality through gaming, while the rest received no training.

A professional coach has been assigned to measure the performance level of players before and after the training phase. The players were then all put to the test in a match between them and an artificial intelligence while receiving haptic and audio feedback within the virtual world.

The results of the experiment were very conclusive, and researchers found a significant increase in performance after training in VR. In an article published in the scientific journal PLoS One, scientists believe their study proves that advances in VR can be transmitted to the real world.

Thus, just like in the surgical sector where VR is increasingly used as a training tool, researchers believe that this technology could offer tremendous opportunities in the field of sport. It could allow overcome barriers to athlete training such as the cost of equipment, logistical constraints, or even meteorological hazards. Additionally, athletes can use the data collected by VR equipment to monitor their performance over time.

However, the researchers are aware that their study only confirms the effectiveness of VR as a training tool under certain specific circumstances. More studies need to be done to compare its effectiveness with other types of training. Otherwise, computer computing power is at risk of being damaged by professional athletes. The effectiveness of this technology for high-level training is therefore again reduced.

Despite these weaknesses, virtual reality sports training applications could prove to be very useful for the general public. According to Stefan Michalski, co-author of the study, the UniSA Cognitive Aging and Impairments Neurosciences Laboratory (CAIN) has started to study how VR can helping people with mental disabilities to give them more autonomy.


These people could develop their social and cognitive skills within a comfortable and secure virtual environment. Here again, the challenge is to succeed in transferring the capacities acquired in virtual reality to the real world...

Become a spider in virtual reality with this strange experience ❯