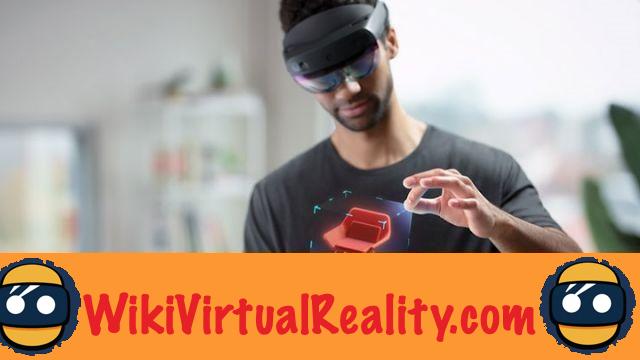 In 2017, Microsoft was entering the virtual reality market with its “Windows Mixed Reality” platform and the ecosystem of VR headsets manufactured by its partners such as Asus, Lenovo, HP, Dell and Samsung.

However, these devices have had mixed success compared to the Oculus Rift or HTC Vive. Since then, Microsoft has clearly abandoned the VR market. Recently, Xbox Division President Phil Spencer went so far as to assert that there would be no headset for the future Xbox because "nobody is asking for VR".

Now, the American giant is focusing on the augmented reality market and this strategy could be relevant for several reasons. First of all, according to IDC, the growth of the VR / AR industry is expected to be mainly driven by business applications.

That's why Microsoft is targeting corporate customers with its $ 2 HoloLens 3500 headset. This device is exclusively intended for professionals, both for its price and its design. It is designed for industrial applications such as training, equipment maintenance, engineering or product design.

Certainly Microsoft cannot hope to compete with Oculus in terms of the number of sales. It is estimated that Microsoft sold 50 HoloLens in 000, while Facebook sold over a million VR headsets in 2018. However, knowing that the HoloLens 2 is almost 10 times more expensive than the Oculus Quest, Microsoft could almost compete with Mark Zuckerberg's firm in terms of profits.

How Microsoft is cornering the business augmented reality market

In addition, the augmented reality headset is presented above all as an alternative to Windows PCs. Use cases like architectural design, industrial maintenance or medical applications are similar to those of PCs. On the contrary, virtual reality is above all perceived as a fun technology dedicated to gaming and entertainment.


Otherwise, Microsoft largely dominates the AR headset market today and is found almost all alone in this segment. Its only serious competitor is Magic Leap, whose Magic Leap 1 headset is a commercial failure.

Other tech giants are brewing AR glasses, like Facebook and Apple. However, it is likely that these devices will be addressed to the general public. Fact, Microsoft will be able to continue to enjoy its monopoly in the business market. In addition, the firm should benefit from a solid technological advance thanks to the accumulated experience ...