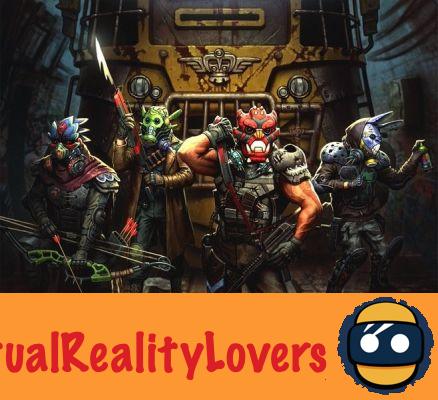 The XREAL Games studio already has two virtual reality games in its repertoire. These are two FPS. First of all Zero Caliber which is played in an environment very close to Counter Strike. And A-Tech Cybernetic which is very strongly inspired by Doom and his demons. This independent studio unveiled last week on its social networks a new game in development: Gambit.

XREAL Games is not straying with Gambit from the style of play that has made it successful so far. The developers present it as a future AAA quality action game. In addition, they specify that it will be playable in co-op (or even thought about cooperation with other players). It should take place in a dusty road movie vibe, filled with guns, trains and a rock and roll soundtrack. In any case, the image and the short video accompanying the advertisement show a colorful play.

The Gambit campaign both playable in Co-op and solo

The Gambit campaign will be divided into three chapters. Each of these chapters will allow you to browse three major maps. As the adventure progresses, players will be able to unlock weapons and additional content. The game should also integrate a progression system in the form of a level in order to lengthen the life of the experience. If the story has a Co-op mode, it will also be quite possible to play solo. The team that takes care of the development of the game, called 2ndGig finally discusses the addition ofa player versus player game mode, scheduled for later.

This is the only information we have at the moment. XREAL Games nevertheless promises toshow more in fall 2020 for a release set for 2021, without further details. Those who are waiting for the release on PSVR of Zero Caliber be reassured, however. Indeed, the development of Gambit in no way affects this port, since as mentioned above, it is another team that takes care of it.


See you next fall for the first gameplay images of Gambit.