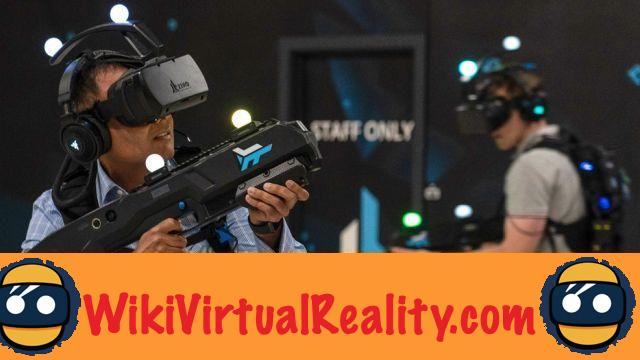 One of the main weaknesses of VR headsets like the Oculus Rift and HTC Vive is that the player has to be content to play in a small area of ​​only a few meters for the tracking system to work properly. On the contrary, “Free Roaming” type out-of-home VR experiences make it possible to move simultaneously in the real world and the virtual world over an area that can exceed 100 square meters. The feeling of immersion is therefore much greater.

This is the reason why these experiments are very successful and are more and more fashionable. Thus, Disney called on The Void to create 5 hyper-reality experiences from the Marvel, Star Wars and Disney films. Likewise, since February 6, 2019, the Parisian VR center Illucity offers the TOYLAND experience developed by the French studio BackLight.

Australian company Zero Latency is also a leader in the Free Roaming out-of-home VR experiences market, with 24 hubs in 13 different countries, five critically acclaimed games, and more than 500 cumulative visitors since 000. However, over the years time, the firm noticed that a many of its customers want to be able to compete against each other in virtual reality.

However, until now, the various games offered by Zero Latency only allowed players to team up and cooperate against zombies, robots or aliens controlled by the computer. In order to meet this demand, company unveils its first PvP game: Sol Raiders.

Zero Latency Sol Raiders: a VR Free Roaming game allowing two teams of four players to compete against each other

- Free Roaming PvP Out-of-Home VR games are still extremely rare, quite simply because their development involves many more technical constraints. However, several companies are developing such experiences, like the French from Bigger Inside. However, the entry into this field of a heavyweight like Zero Latency represents a real turning point.


This new experience called “Sol Raiders” takes place in the distant future where Earth has disappeared and where human survivors cross the universe in search of a precious resource: the “Soil”. Anyone who gets hold of this source of energy is promised a life of opulence. Unfortunately, everyone covets it and this is the reason why you are going to have to face your family or friends to get hold of it.

Two teams of four players compete in a large space. Each player is provided with a VR headset, a backpack PC and a connected rifle. In the real world, the play area is completely empty to allow users to move around freely. In contrast, in virtual reality, players find themselves propelled into different labyrinthine maps. Behind each door, it is possible to find yourself confronted with an opposing player. Intense shootings then begin, from which only one player will emerge alive.

Each of the three maps offers a different mission with its specific objectives. The main goal is not to kill as many opponents as possible, but to collect as much soil as possible to achieve victory. That said, the end justifies the means ...

This new VR PvP experience will be offered in the 24 Zero Latency centers from February 9, 2019. If you are in France, the easiest way is to go to the Zero Latency Center in Notthingham, UK, or Madrid, Spain.

With this new competitive game, the Australian company intends to conquer the VR eSport market. She hopes that leagues and tournaments will develop around the title, and will also offer reduced prices to players who want to create their championships.

add a comment of Zero Latency: the 1st PvP game from the out-of-home virtual reality giant