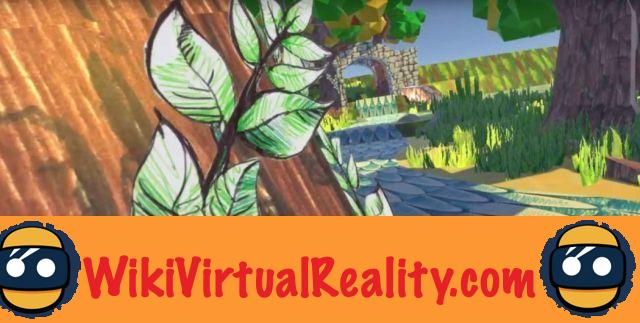 The Zockrates Laboratories video uploaded on June 5, 2016 took its time before getting talked about. This new 3D creation VR game looks wonderful by its very childish appearance. The first person experience allows you to create a world straight out of your imagination through your graphic designs. is reminiscent of the application, but in a style oriented “fairy tale” reminiscent of the drawings of our childhood. During 1 minute 30, the independent studio makes us discover a fantasy world where the player can impact the different textures present in his environmentt and share them endlessly with his friends. The game looks very “cute” on the surface, but this trailer reveals a lot more interesting information: is in development for the Nintendo NX and the Oculus Rift.

Is the developer surfing the rumor of the upcoming Nintendo VR console in hopes of promoting their game? This last

In fact, most of the trailer's camera angles seem to match the Oculus Rift's tracking system. is also playable without VR, information that can lead to confusion. This set of facts leaves us in the dark about a real adaptation for the VR system of the Nintendo NX. In addition, the postponement of the console's release to 2017 to “bring better performance VR content” does not work in Zockrates Laboratories' favor. Has the independent studio unveiled too soon what appears to be the first game for Nintendo's future VR console? We give him the benefit of the doubt and look forward to further information.

The 2016 edition of the biggest video game show will perhaps be an opportunity for Nintendo to answer all our questions about its VR project. However, the Japanese firm intends to take advantage of E3 to advance its next flagship game. For the more impatient, it will be necessary to wait until the end of the year in 2016 to know in more detail the future support of the emblematic Mario.

[Test] The Climb: A game that reaches the pinnacle of VR games ❯