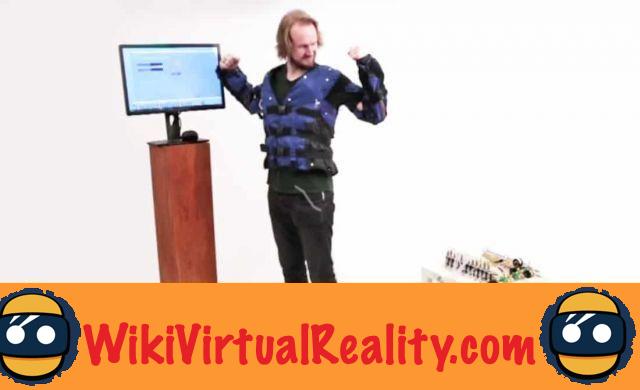 The future of virtual reality will go through physical sensations. In any case, this is what Disney Research seems to think, which has just unveiled a haptic jacket for VR. Called "Force Jacket", the device allows simulate the sensations of physical contact through airbags pneumatically actuated.

To put it simply, the jacket combines 26 air pockets connected to a machine through tubes. The machine takes care of inflating and deflating the air pockets with precision at the appropriate time. So, combined with a virtual reality experience, the jacket can allow the user to experience the physical sensations that their avatar feels in the game.

As an example, Disney evokes the touch of a snowball. It would also be possible to use such a system to simulate the impact of a punch in a fighting game, or of a bullet in a shooting game. In short, the Force Jacket could help add the sensations of touch in virtual reality, increasing the realism of the experiences and therefore the feeling of immersion.

Disney could establish itself as a technological leader in virtual reality

Disney Research isn't the first company to develop a haptic feedback jacket. However, this pneumatic system seems more ingenious than electrical stimulation offered by most manufacturers. In addition, Disney has more financial means than a simple startup to complete its project. This haptic jacket could therefore prove to be truly revolutionary for virtual reality.

Unfortunately it is unlikely that this accessory will be offered for sale to the general public. Disney Research instead explores the possibilities offered by VR for the amusement parks of the American company. As a reminder, Disney has already partnered with The Void to create the Star Wars Secrets of the Empire attraction, offering 4 players the opportunity to evolve simultaneously in virtual reality and in a furnished space of the real world. This new invention could bring even more breathtaking attractions to life.

After the Oculus Quest, HTC predicts the revolution of “all-in-2” VR headsets ❯