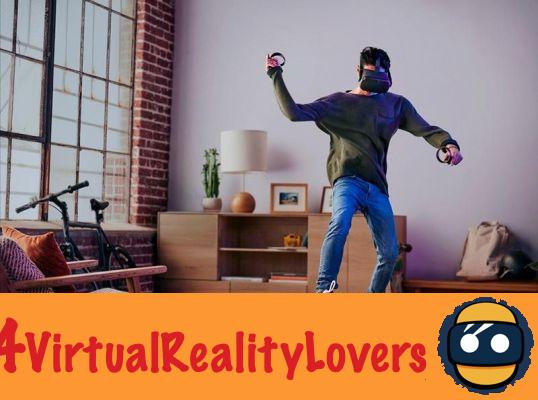 Unlike other high-end VR headsets like the Oculus Rift or the HTC Vive, the Oculus Quest works wirelessly and has external sensors. This is a real advantage, especially for applications where movement and movement are at the center of the gameplay. So, the Quest is undoubtedly the best headset for playing sports while having fun in virtual reality. Through this file, discover the best fitness games for the standalone VR headset from Facebook.

Should we still present Beat Saber, the best-selling game on the virtual reality market? The gameplay of this title consists of slicing blocks using lightsabers to the rhythm of a supercharged soundtrack. Besides being fun and jubilant, this game will allow you to work on your cardio as well as the coordination between your hands and your feet.

According to the VR Institute of Health and Exercise, you will lose approximately 6 to 8 calories per minute while playing Beat Saber. Knowing that the game will undoubtedly captivate you for several hours, you can easily burn several hundred calories per day and improve your reaction time. In addition, your legs will be put to the test since you will also have to do squats to avoid obstacles ...


BoxVR, the most complete VR fitness game for Oculus Quest

BoxVR is currently one of the only virtual reality games specially designed for fitness. There you will find a wide variety of exercises created by coaches in order to simulate the physical training you will receive in a boxing class.

So you will have to hit orbs using different punches while crouching or leaping to the side to avoid obstacles. The game's soundtrack is from PremiumBeat, in order to avoid copyright issues, but is still very correct and offers a wide variety of styles ranging from rap to rock to pop.

This game will allow you to work both your upper and lower body. Although a little less fun than Beat Saber, this title is more complete in terms of physical training. You will be working both your cardio and your strength, and your leg muscles. According to the VR Institute, you will lose between 6 and 8 calories per minute while playing it. For even more effect, wear a heavy jacket during your sessions.

Creed, the best boxing game in VR on Oculus Quest

If you want to distribute punches, the game Creed by Survios is probably the best choice available to you. This title is pretty minimalist, but will make you sweat for sure.

It offers both boxing fights against virtual or human opponents and short workouts to improve your cardio. Certainly, the emphasis is more on the playful and entertaining aspect. However, these short and intense sessions will allow you to improve your physical condition every day. Only downside: the movements are carried out using a controller. So you won't be working your legs while playing this game.


Thrill of the Fight: the most realistic VR boxing game on Oculus Quest

Thrill of the Fight will be available on Oculus Quest by the end of 2019. Just like Creed, this is a boxing game. However, rather than focusing on fun, this new game is all about realism.

This title is the one that will put your physique to the test in virtual reality the most and could well establish itself upon its release as the new benchmark in VR fitness. You will be able to fight 12 consecutive rounds, and the VR Institute estimates that this game allows you to burn 8 to 10 calories per minute. You will emerge from virtual reality with the body of a fighter. However, be careful to have enough space in the real world to move around the ring in the virtual world!

If you are not particularly boxing, you can also opt for the game Swords of Gargantua. This title offers you confront hordes of enemies using a large arsenal of bladed weapons. The physics are realistic, just like the handling of weapons.

VR Fitness Insider website says this game could burn nearly 6 calories per minute or as much as Beat Saber. A Reddit user even claims to have managed to burn 360 calories in just 45 minutes playing this game ...

If you've ever practiced it in the real world, you know that archery is a very physically demanding sport. In virtual reality too, this discipline can allow you to exercise.


Elven Assassin is a VR game in which you will have to defend your castle against an army of orcs. There is both a single player mode and a multiplayer cooperative mode. You will work your arms by shooting arrows at the invaders, but also your legs by bending down to avoid enemy projectiles.

If you prefer racquet sports to combat sports, Racket NX is hands down the best choice on Oculus Quest. The game offers you to throw a ball against walls within a dome. The title delivers sumptuous graphics and sound effects, and will let you burn 4 to 5 calories per minute according to VR Institute.

Racket NX was already available on PC VR headsets, but is taking on new heights in a wireless headset like the Quest. From now on, your movements will no longer be hampered by the cables and you can exercise freely.

The dance is one of the easiest and most enjoyable ways to exercise. This practice allows you to work the whole body, and improve your coordination, your flexibility, and your sense of rhythm. According to several studies, dancing regularly is also good for the mind and helps fight dementia while strengthening neural connections.

On Oculus Quest, the Dance Central game allows you to enjoy these benefits. You will have to dance to 32 songs of various styles, which will allow you to work your cardio and ease your mind. You will burn around 6 calories per minute with this experiment. A multiplayer lounge will allow you to dance and chat with other users.

Now you know which games to download to exercise in virtual reality. However, be aware that it is quite possible to burn calories while playing VR games which are not necessarily designed for this purpose. For example, a Skyrim VR fan lost 5 pounds while playing the game a week.

To take advantage of these benefits, the best solution is invest in a VR treadmill. This device will allow you to walk or run in the real world to make your avatar move in the virtual world. You can therefore exercise while playing, and increase the feeling of immersion in the game ...

add a comment of Oculus Quest: top of the best fitness games on the wireless VR headset