A few months ago, Disney and Lenovo created the event by announcing the upcoming launch of an augmented reality headset entirely dedicated to Star Wars. Something to salivate millions of fans around the world by promising them to be able to wield the lightsaber like a real Jedi. Unfortunately, at the time, the two firms had not communicated any practical information on the results of this partnership.

It is now done. On this Friday, September 1, Force Friday, annual meeting for fans of the famous film franchise, the Star Wars: Jedi Challenges is finally available for pre-order. As part of the IFA in Berlin, Lenovo said the device would be available from next November. Its price is $ 199,99.

For this sum, fans will receive the Lenovo Mirage augmented reality headset, a lightsaber-shaped controller, and a small beacon for tracking. The headset also includes sensors dedicated to Inside-out tracking, a 2200 mAh battery, navigation buttons, and a micro USB port for recharging and data transfer.

Star Wars: Jedi Challenges will require a smartphone to function 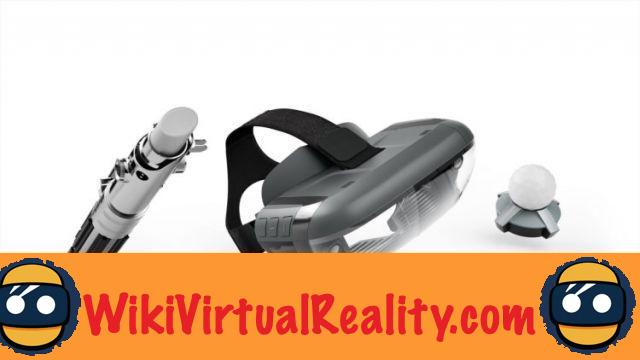 
Le Lightsaber-shaped controller has several buttons: Power, Saber and Strength. The tracking beacon is used to follow the actions and the position of the player in relation to the virtual content. These accessories carry 500 mAh batteries and 2 AA batteries respectively. The box also includes a charger, a charging cable, a micro USB cable and Lightning, USB-C, and micro USB adapters.

As the Controller suggests, the game offers the player to wield the lightsaber in epic battles. It will be possible to face the holograms of Kylo Ren, Darth Vader, and other emblematic villains of the saga. Users will also be able to play a game of Holochess, the famous holographic chess game from the first Star Wars movie. There is also a tower defense-type strategic combat game in which players can command the Republic, the Rebel Alliance or the Resistance against the Separatists, the Empire and the First Order. It is currently unknown whether additional content will be added over time.


This is not the first time that Star Wars has attracted players in the virtual reality market. Thus, Disney is partnering with The Void to create a life-size VR attraction inspired by Star Wars. Many fans have dreamed for several decades of immersing themselves in the world of the famous franchise, and VR / AR technologies finally make it possible to satisfy this trans-generational fantasy ...

Microsoft: the next Xbox compatible with virtual reality, 4K and 240 FPS?