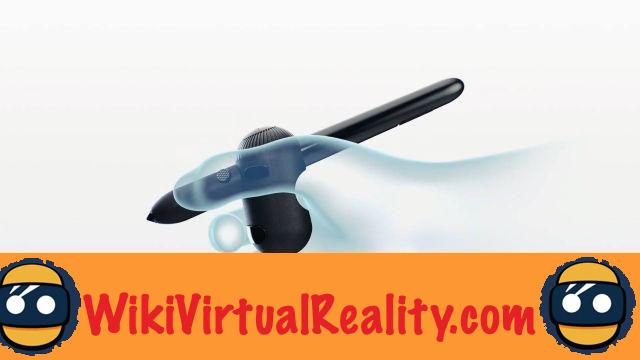 Virtual reality could be a design revolution. Thanks to this technology, designers can unleash their creativity within a virtual environment without constraints.

From the launch of the first VR headsets, several applications dedicated to design were born: Google Tilt Brush, Gravity Sketch ...

However, the controllers of virtual reality headsets (Oculus Touch, Vive Wands, etc.) are not fully adapted to the design. That is why few professionals have already adopted this technology.

In early 2020, Logitech launched one of the first styluses dedicated to virtual reality: the VR Ink, available for $ 750 and compatible with the SteamVR tracking system. This accessory allows you to draw naturally in VR.

Now, it's Wacom's turn to take an interest in this new technology. Founded in 1983 in Saitama, Japan, this company has 88% of the graphics tablet market and is one of the leaders in the touch pen.

His new accessory, and Wacom VR Pen, aims to appeal to professional designers. In addition to being compatible with virtual reality, it also allows you to draw on any graphics tablet from the manufacturer.

Thanks to a pressure-sensitive button, this stylus allows you to modify the line thickness depending on the force used to grip it in the hand. Thus, the user will have the sensation of drawing on paper while drawing lines in the VR.

Several other buttons are present, for example to choose a tool or to select a surface. The designers can therefore gain in precision and efficiency.


Unlike the Logitech stylus, the Wacom VR Pen does not rest not on the SteamVR tracking system. The manufacturer has developed a proprietary tracking system to extend compatibility to all helmets on the market.

According to Wacom CEO Nobu Ide, this VR Pen stands for ”“. In other words, the giant of the graphics tablet is already convinced of the potential of virtual reality for the design ...