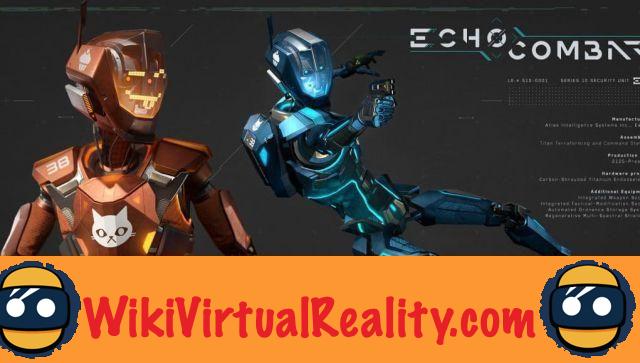 In 2017, the American developer Ready at Dawn managed to establish itself as a leader in VR gaming with two excellent games available on Oculus Rift:, and. The first is a single player game offering a thrilling adventure in space.

The second takes up the game mechanics of, but is presented as a competitive online multiplayer game directly inspired by the film. Two teams compete in an arena devoid of gravity, with the aim of getting a Frisbee into the opposing cages.

These two games are distinguished mainly by exhilarating gameplay, allowing players to move around the VR with complete freedom of movement without experiencing a feeling of nausea. Building on this success, Ready at Dawn announced, at the Oculus Connect 4 conference at the end of 2017, a new multiplayer game for the ”“ saga.

Echo Combat: the new game from the creators of Lone Echo and Echo Arena

This Thursday, June 21, 2018, after a closed beta at the beginning of the month, the game enters open beta on Oculus Rift. This time it is a game inspired by titles like, or always in zero gravity. As in the games mentioned, two teams compete in an arena.

The attacking team must push a cart to the opposing side, while the defending team must push back the charge. Of course, the players are armed and must kill each other to achieve their goals. The games last three minutes.

This game mode has proven itself on PC, and it's a real pleasure to see it adapted into virtual reality by such a talented studio. If you would like to try it out for yourself, you just download the game from the Oculus Store. The open beta will run from Thursday June 21 to Sunday June 24, 2018.

Touring Karts: a virtual reality karting game, but not just ...

To The Top - Review of the best virtual reality climbing game

Add a comment from Echo Combat: Overwatch in VR available in beta ouverte