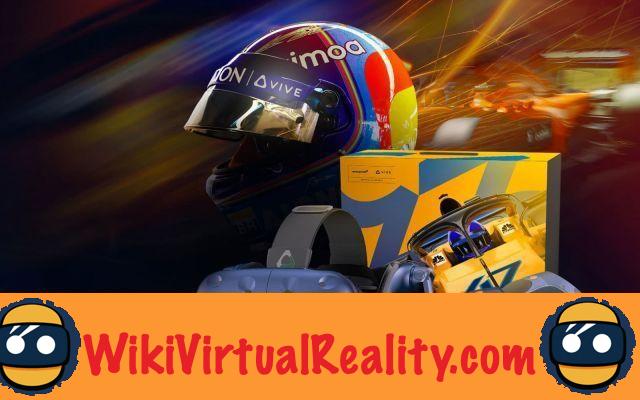 Following the announcement of a partnership in May 2018, HTC Vive and McLaren are launching a limited edition of the HTC Vive Pro VR headset on November 23, 2018: the Vive Pro McLaren. This new model is intended primarily for fans of Formula 1 and racing games. It differs from the classic HTC Vive Pro by its design in the iconic blue and papaya colors of the British stable. The controllers are also colorful in its image.

Besides, this device comes with a special version of McLaren Rfactor 2 VR Racing racing game designed to work without any additional driving accessories. It is also offered with a all new McLaren Garage VR experience, developed by Vive Studios and McLaren. This multiplayer simulator offers players the opportunity to immerse themselves in the McLaren racing team to learn how to make tire adjustments like in a real race.

The experiment also offers a jhad a competitive multiplayer titled ”Pitstop Challenge“. This game offers players to explore the last garage of the McLaren stands in room-scale (at the scale of a room). Competing with other players, you will have to complete timed challenges. For example, it will be a matter of changing a wheel as quickly as possible. Enough to immerse yourself in the daily life of an F1 racing team.

As Alvin Wang Graylin, President of HTC China explains, this limited edition of the HTC Vive Pro will allow 500 million Formula 1 Grand Prix fans to immerse themselves in this world that fascinates them. Likewise, McLaren Racing CEO Zak Brown believes this VR headset is for for motor racing fans as well as virtual reality enthusiasts.


The HTC Vive Pro McLaren Edition is now available on the HTC Vive website for the price of 1550 euros. It comes with the Rfactor 2 VR Racing and McLaren Garage VR experiences, as well as a six-month subscription to the Viveport platform.

VR in the workplace - A glimpse of the near future ❯