Play Pokémon in virtual reality with the Oculus Rift! 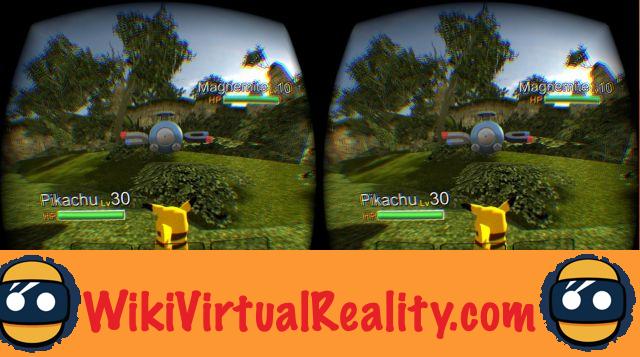 For once, the creator has applied to offer a innovative gameplay at places of games Pokémon that we know. Thanks to a Oculus Rift DK2 and applications Leap Motion (transcription of hand gestures) and Voice Attack (voice command), the internet user created a 3D demo of a potential fighting and exploration game in the world of the famous little monsters. The virtual reality headset allows you to move your gaze in the play area.

Misterbunbun also incorporated a HUD (head-up display) which mentions the different actions available. To trigger them, nothing could be simpler, place your hand on the desired command and then reproduce the adequate movement. You can for example throw a pokeball to catch the defeated pokemon. Other actions should be possible in the future.

The dream of a whole generation

Certainly the projet is only at his stammering and the result is not yet the most convincing. This translates into the more than rigid animations of the characters, and the recognition of movements not very well developed. The graphics also leave to be desired, but it is assumed that Misterbunbun favored compatibility with the Oculus Rift before tackling other aspects of his game.

Despite all these pitfalls, this creation has enough to leave dreamer any fan of the animated series. We hope that the Internet user intends to develop his baby well to perhaps eventually lead to a marketable game (). In view of these multiple projects, we can only be enthusiastic about what virtual reality could offer us in the coming years. For the lucky ones with an Oculus Rift, you can download the demo here. We are counting on you to give us your impressions. ”…! “

add a comment of Play Pokémon in virtual reality with the Oculus Rift!