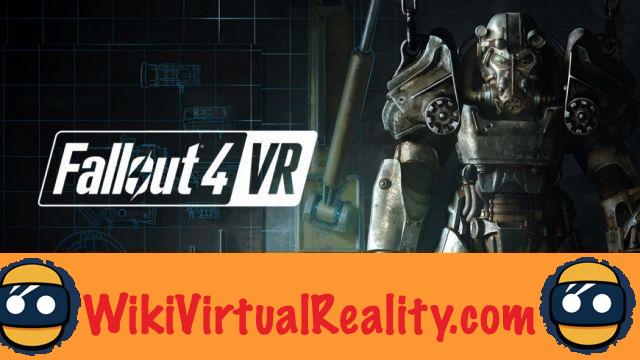 Fallout 4 VR storyline: a satirical reflection on our world 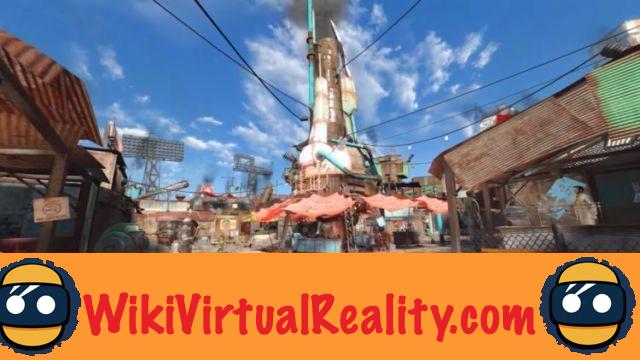 The Fallout 4 VR storyline looks like a scenario of anticipation on the dangers of nuclear power, but also as a critique of consumer society and the American dream. The story takes place in the near future. After years of prosperity thanks to the use of nuclear power in every way, America is running out of resources and is going through an unprecedented crisis.

One day, the hero and his family learn on television that nuclear explosions have sounded in New York and Philadelphia. The crowd panics, the citizens rush to the anti-atomic shelter nearest, but only citizens registered with the Vault program are allowed shelter. Once buried underground, the couple and their baby Shaun are placed in a decontamination cell that turns out to be a cryonics device.


Under his helpless gaze, the hero witnesses the murder of his half and the kidnapping of her child. The character goes back to sleep and wakes up due to a flaw in the computer system that keeps him in ice. Walking the corridors of Vault 111, the player discovers mutant beasts and human skeletons by the dozen. Finally coming back to the surface, he finds his domestic robot who tells him that 200 years have passed since the nuclear attack. It is the start of a thrilling adventure in search of revenge and truth.

The storyline for Fallout VR is deep, exciting, and resonates with issues of the world we live in today. For all these reasons, this scenario is excellent.

It is probably unnecessary to present the gameplay of Fallout 4 in detail. The game was released for consoles and PC in 2015, and is Bethesda's biggest commercial success. This game is therefore very popular. In short, the title is presented as a skillful mix between first person shooter and role play. The player can use a vast arsenal to defeat the mutants that haunt the post-apocalyptic world: firearms, melee weapons, grenades ...

As in any self-respecting RPG, the customization is at the rendezvous. Thus, when creating his character, the user can distribute 21 points in the different characteristics : Strength, Endurance, Intelligence, Perception, Agility, Charisma and Luck. Each of these characteristics improves the character differently. Strength increases melee damage, agility allows you to blend in better with darkness, charisma helps persuade characters during dialogues ... so, depending on their playstyle, each player can choose to specialize in a field. As they progress, the player can continue to reinforce these different characteristics and develop the special skills associated with them. 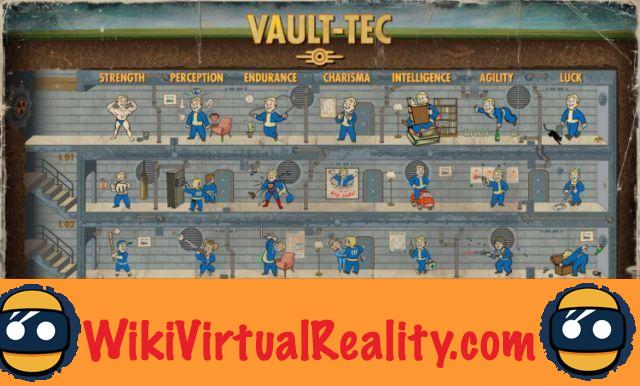 The real question today is what does virtual reality bring compared to the original game? First of all, note that two movement systems are available. By default, as in many VR games, the player moves by teleporting. However, it is possible to opt for a free movement system, allowing the use of the Vive's touchpad to move around while running. In both cases, it is possible to move quickly.

If you opt for teleportation, fast travel is done by teleporting over a long distance. In the event of free movement, it is a question of sprinting. These rapid movements consume energy, limited by a gauge. When it is full, this gauge also allows the use of VATS, a system to slow down time to effectively target different targets and commit carnage in the enemy ranks. The Pip-Boy handheld computer is now used as a watch, looking at his wrist realistically. 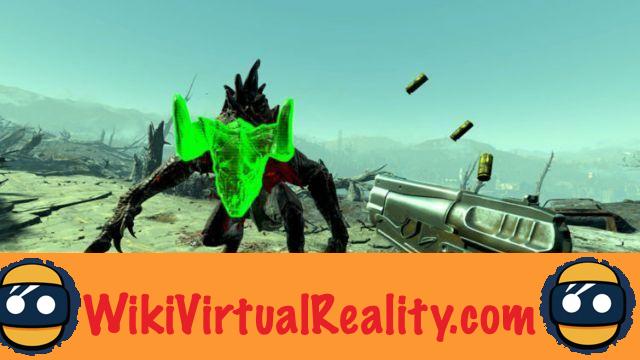 Regarding the combat system, virtual reality brings a real plus. No more hitting by pressing a button, or aiming with a joystick. In this virtual reality portage, melee weapons manipulate realistically. So you will have to grab your controller like a weapon to hit enemies. To aim with a firearm, you will have to actually place the controller in front of your eye to target the enemy using the reticle. The experience is much more intense.

As a full port of an AAA game for consoles and PC, Fallout 4 VR is very complete and offers a much longer lifespan than most virtual reality games. Bethesda already had very extensive content and only had to focus on making the necessary changes to porting to VR.


The main quest will occupy you a good ten hours, but it is especially the countless side quests that will spice up the adventure. In addition, the possibility of specializing his character differently will make you want to start the game over several times. 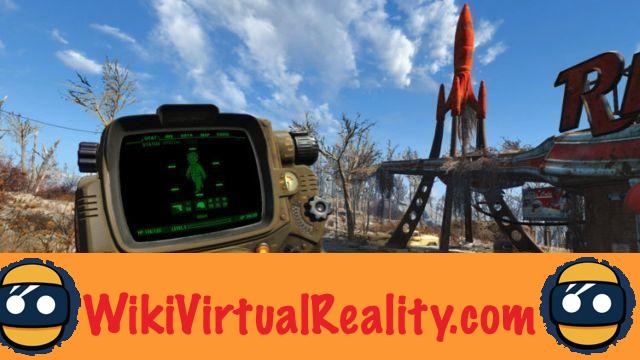 - Fallout 4 VR's graphics aren't as good as on PC or console, which is normal for a virtual reality game. For some players, the game is even blurry and grainy, but Bethesda has already rolled out a patch to remedy the problem. There are also some display bugs.

For the rest, the visual realism of the game, the artistic touch and the large number of details that swarm on the screen make Fallout 4 VR very aesthetically pleasing. It is a real pleasure to walk around this open world. As with Skyrim VR on PSVR, the art direction worthy of a AAA game compensates for the technical aspect. The soundtrack is also very successful, as are the vocal dubbing, and contributes greatly to the feeling of immersion.

Fallout 4 VR immersion: a very immersive experience despite some shortcomings

Thanks to virtual reality, Fallout 4 VR is more immersive than ever. You really have the feeling of being immersed in this post-apocalyptic world, left to yourself, in danger at every turn. The density of visual details and interactive elements provide an indescribable feeling of freedom. As you return to the surface of Vault 111, the player will be amazed by the vastness of the landscape stretching out on the horizon. Likewise, the characters who follow the hero with their eyes strongly contribute to the immersion. The explosion sounds and other surprising sound effects will make you jump and cause a feeling of imminent danger.

Unfortunately, as a port of a PC / console game, Fallout 4 VR is sometimes less immersive than games directly designed for virtual reality. For example, the player cannot really use their hands naturally. Unlike games like Lone Echo or Robo Recall, the title doesn't actually allow you to grab things, press buttons, or bring food to your mouth. Here, the character's hands are floating in the air and objects too. This slightly reduces the feeling of immersion. 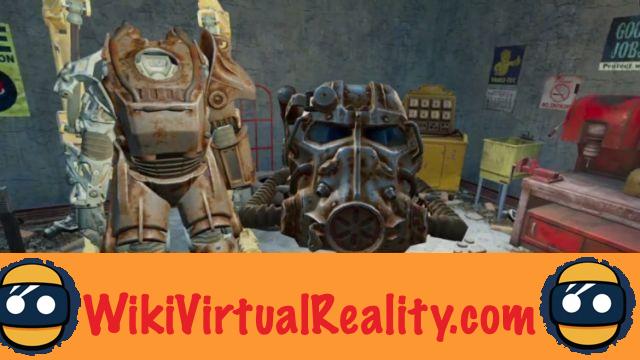 Fallout 4 VR comfort: no comfort issues to report, as long as you're in good shape

Fallout 4 VR is very comfortable. Even in free movement mode, the game does not cause motion sickness. Indeed, as soon as the player decides to run, his field of vision is reduced. This clever subterfuge helps prevent nausea.

However, note that Fallot 4 VR is played only standing up. In fact, if you're not very athletic, fatigue can quickly kick in if you're not used to standing and hitting enemies with an adjustable wrench. Fortunately, you don't have to crouch in real life to play it stealthily. A simple press of the trigger allows you to hide.

Fallout 4 VR versus the competition 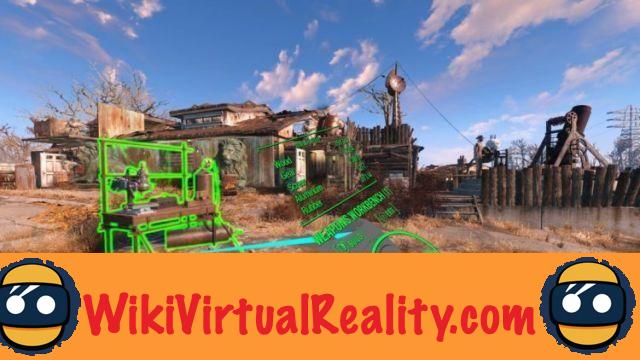 As mentioned above, in terms of immersion, Fallout 4 VR suffers the comparison against games like Lone Echo or Robo Recall because it is not directly designed for VR. The feeling of presence and realism when using the hands is therefore much less convincing.

In contrast, the complexity of the gameplay, the depth of the content and the storyline give Fallout 4 VR a step ahead of the competition. It is indeed one of the first AAA virtual reality games.

What is Fallout 4 VR worth on Oculus Rift?

Warning ! It's technically possible to launch Fallout 4 VR on Oculus Rift or Windows Mixed Reality through Steam VR. However, the game is clearly optimized for HTC Vive Vive Wand controllers. In fact, the controls are designed for the touchpad of these controllers. The Oculus Touch joysticks do not allow you to interact properly, and give the impression of slipping, especially in the menus.

Currently, Fallout VR is therefore almost unplayable on Oculus Rift, and Bethesda advises owners of the Facebook headset not to buy the game. Hopefully an update will be deployed soon. 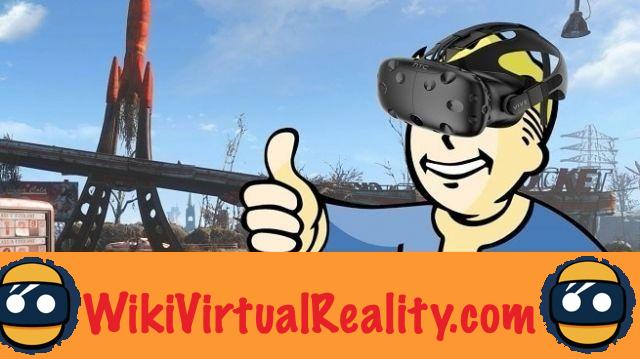 De new performance and quality options are offered to allow users to fully enjoy the experience. Likewise, it is now possible to adjust environmental scale to correct height issues that some players may experience depending on their height. A new option also allows you to reverse the scrolling of the Pip-Boy map.

This update also brings elements that were sorely lacking in the game. It is now possible to use rifle scopes who are equipped with it. The VATS aiming system has also been improved. Unfortunately, while the Doom VFR update brought compatibility with Windows Mixed Reality, Fallout 4 VR did not. Official Oculus Rift compatibility is still not announced either, although it is already possible to play the game on the Rift through SteamVR.

This update being offered in beta, it is necessary to download manually from Steam. To do this, right click on Fallout 4, then click Properties> Betas, and choose update 1.1.24.0 from the drop-down menu.

After the excellent Skyrim VR and Doom VFR, Bethesda concludes 2017 with a masterful third VR port of one of its greatest hits. Fallout 4 VR isn't perfect, but takes virtual reality to a whole new level. The title proves that real full virtual reality games can deliver an experience worthy of the best PC games, if not even a richer experience.

Fallout 4 VR allows end 2017 on a note of hope for virtual reality, and we can only hope for more ambitious projects for 2018. If the commercial success is at the rendezvous, there is no doubt that more renowned developers will in turn embark on the adventure next year.

Scenario: An exciting storyline that makes you think.

Immersion: A very immersive experience despite a few shortcomings.

Comfort: No comfort problem to report.