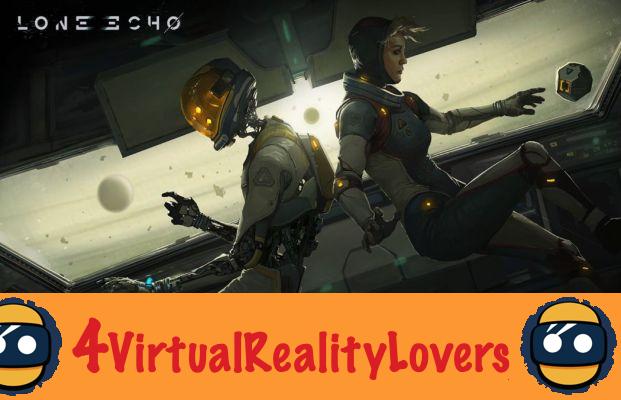 The action of Lone Echo takes place in 2126, aboard Khronos II, a space station responsible for mining the rings of Saturn. The player embodies artificial intelligence embodied in a robotic body, whose role is to assist Captain Olivia Rhodes. The two characters maintain a close and friendly relationship. Unfortunately, Captain Liv has just learned that she will soon be separated from her friend "Jack", who will soon be named captain in turn. The beauty has a lot on her heart, but intends to enjoy her last week in the company of the nice robot.

It is then that a strange anomaly looms on the horizon in the vastness of the cosmos. Of many malfunctions occur within the station, and Jack and Liv will have to repair the damage and investigate this mysterious anomaly. Many twists await the player, but the storyline of Lone Echo goes far beyond a simple futuristic adventure.


Le title explores many themes, such as the relationship between human and robot, the question of death, the philosophical dimension of artificial intelligence and much more. Character development is also very neat. For all these reasons, Lone Echo is worthy of a very good sci-fi movie.

Lone Echo is above all a narrative and contemplative experience, but the gameplay is far from uninteresting for all that. First of all, the displacement system is one of the most successful of all virtual reality games. As in Echo Arena, the multiplayer spin-off of Lone Echo, the player moves freely in an environment devoid of gravity. He can propel himself by clinging to any wall, or use the turbos incorporated in his wrists.

Later in the game, the character also acquires a back-jet engine, allowing him to project himself in the direction of his gaze and instantly brake. Thus, the player can fly freely in all directions, without feeling any problem with motion sickness. The sensations provided by this system of movement are truly exhilarating, and considerably reinforce the immersion.

The other big highlight of Lone Echo's gameplay is finger tracking. Thanks to the Oculus Touch controllers, the player can use his hands in a very natural and intuitive way. You can make a fist, point your index finger, or lay your hand flat on any surface. Here again, the feeling of immersion and presence is greatly increased.

In order to help Olivia in the space station, Jack the robot has a wide range of tools that he is able to draw using different gesture commands. Thus, by pressing on his helmet with his index finger, the player can turn on his flashlight. By squeezing his wrist, he can deploy a scanner or a laser cutter.

All of this different tools are used to repair the space station, and later to investigate the mysterious anomaly. To solve the various dysfunctions of Khronos II, the player must solve kinds of puzzles. It will for example be a question of cutting a surface using the laser cutter, then aligning circuits in order to restore the electric current.

The adventure being closely linked to the scenario, the player does not have a great deal of freedom. However, it is possible to choose the order in which to accomplish the different objectives. For the rest, the course remains rather linear, but the many twists and the narrative suspense allow to maintain the interest of the player.

Some will undoubtedly regret the lack of action of Lone Echo. The dialogues can seem endless, and even the phases of the game are not really intense. Also, the title isn't really punitive in terms of difficulty. Indeed, as an artificial intelligence, Jack cannot die. In case of destruction of his physical envelope, he finds himself directly embodied in another robot, and must simply return from the space station to the place where his body was destroyed. Compared to Echo Arena, the multiplayer version of the game, it's clear that the action is significantly less intense.

Adventure Lone Echo can be completed in about 6 hours. However, it is possible to scan all the elements of the game in order to obtain more scenario information. Likewise, numerous ancillary and optional tasks extend the service life.

Anyway, The Echo Arena multiplayer mode, offered on the Oculus Store as a full-fledged game, comes free with Lone Echo and will keep you busy for many, many hours, as long as you enjoy the gameplay and enjoy the competition. Considering that Echo Arena is part of Lone Echo, the game lifespan is definitely the highest in the VR video game market right now.

- Lone Echo's graphics are simply gorgeous. The lighting effects, the level of detail, the realism of the textures is a real feast for the eyes. Likewise, the physics engine is impressive and really gives the impression of being in space, within an environment devoid of gravity.

However, it is especially Olivia's facial expressions that are likely to mark your mind. These expressions are very realistic, and give the illusion of actually being facing a human actress in the flesh. We will come back to this a little later. The sound effects are also very successful, as are the vocal dubbing. Here again, the quality is worthy of a cinematic blockbuster.

Lone Echo immersion: one of the most immersive VR experiences of all time

Lone Echo is possibly one of the most immersive games available in the VR gaming market today. The level of detail of the graphics, the quality of the dubbing, the fluidity of movement and the precision of the finger tracking really give the impression of being immersed in VR.

Otherwise, interactions with Olivia are particularly realistic and give the impression that the young woman is genuinely aware. For example, if the player throws a toy dinosaur in her face, she will get angry and try to protect herself by placing her hands in front of her head. Likewise, if the user tries to dazzle her with her flashlight or push her aside, the young woman gets angry. During the dialogues, Liv follows Jack with her gaze and fixes him straight in the eye.

La sensation of presence provided by Lone Echo is such that the player may experience a strange sensation for a few minutes after removing their Oculus Rift. It is possible to still have the impression of being in a game, unless it is the game that is reality ...

Lone Echo offers a completely comfortable experience. The motion system allows free movement without any problem of Motion Sickness, and the high quality graphics do not cause eye strain. It is a real success.

Lone Echo against the competition

Lone Echo is truly a one-of-a-kind experience. However, it can be compared with Farpoint, available exclusively on PSVR, which also emphasizes graphics and storyline. Yes Farpoint offers more action, Lone Echo has much cleaner graphics and much more interesting gameplay.

Lone Echo can also be compared to its multiplayer spin-off Echo Arena. It seems clear that action lovers will be more interested in Echo Arena. On the other hand, users who value storyline and graphics will be spellbound by Lone Echo. In short, everyone will have it on their own, which is clearly a great strength.

Conclusion of the Lone Echo test

Featuring a storyline worthy of a good movie, dazzling graphics, and innovative and fascinating gameplay, Lone Echo is directly among the best games on the virtual reality market. In addition, by the incredible feeling of immersion it provides, the title represents a new course for virtual reality. This game hints at the future of VR, and it goes without saying that the future is bright.

Lifetime : A decent lifespan, extended to infinity by the multiplayer mode.

Immersion: One of the most immersive experiences in the VR market.