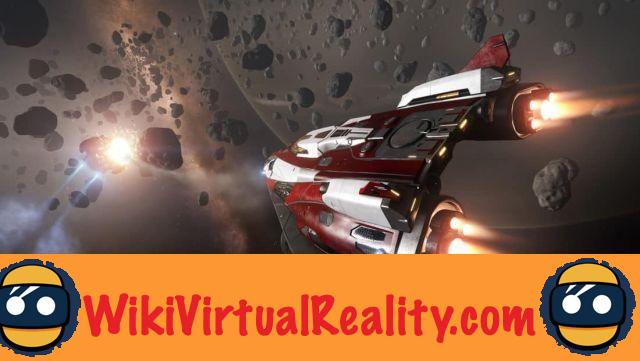 Originally, Elite: Dangerous is released on PC in December 2014. This is the fourth installment of the Elite saga developed by Frontier Developments. It was in March 2016 that virtual reality compatibility was introduced for Oculus Rift and HTC Vive. Check out the strengths and weaknesses of this game.

Elite Dangerous VR scenario: a scenario left in the hands of the players

Elite: Dangerous is not really centered around a scenario. It is primarily an MMO / sandbox type game, giving players the freedom to imagine and create the story of the game themselves through their actions and activities. Becoming a wealthy merchant or a dreaded bounty hunter throughout the universe are possibilities offered by this title. The narration is therefore left behind to allow players to make their imaginations work.


Despite everything, narrative events are regularly organized and deployed over the updates. The very first event, which accompanied the game's release in 2014, told the story of six rivals ready to take the place of the fallen Emperor. Players had to choose sides in order to determine the future of the Empire. According to the developers, each story is designed to guide interactions between players, test their skills, knowledge and morals.

Thus, it is up to the player to decide the conclusion of each story and the turn of the scenario. In general, we find the atmosphere of a space opera-type science fiction work. 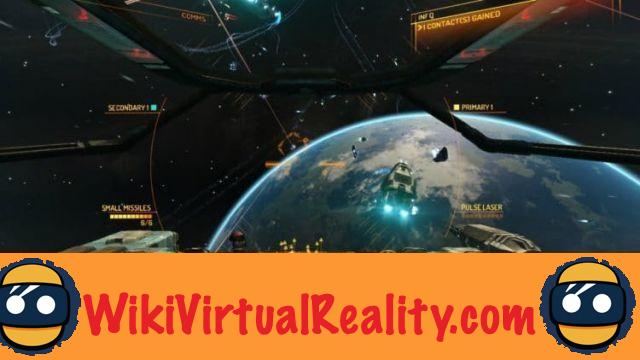 In Elite: Dangerous VR, players can engage in a impressive amount of activities. It is possible to explore the galaxy, to mine resources, to trade between space ports, to fight hostile aliens, to play the pirates or on the contrary to embody a bounty hunter. It is even possible to land on a planet and descend to explore it on foot. The freedom of action is bluffing. However, this freedom can prove to be a bit of a deterrent for new players, as the user is hardly guided and must discover the range of possibilities for himself.

You can play using a keyboard, gamepad, or Oculus Touche / HTC Vive motion-sensing controllers. The Voice Pack also allows you to interact vocally with your ship, like in a science fiction movie. Ave Elite: Dangerous, Frontier Developments has set itself the goal of offering the most realistic space simulation experience all time. In fact, controls are extremely technical and difficult to learn.


The ships of Elite: Dangerous are piloted like real ships. There are hundreds of different orders. In fact, the slightest action requires training. It is essential to complete all the tutorials from the start so as not to get lost later. Even with training, certain maneuvers such as takeoff and landing remain technical.

Once the controls have been mastered, however, this game is really jubilant. In particular, ship battles against other players can take a literal epic turn. Note that it is now possible to pilot a 4 player ship, for a slightly more convivial atmosphere.

Elite Dangerous VR Lifespan: A Game As Vast As Space 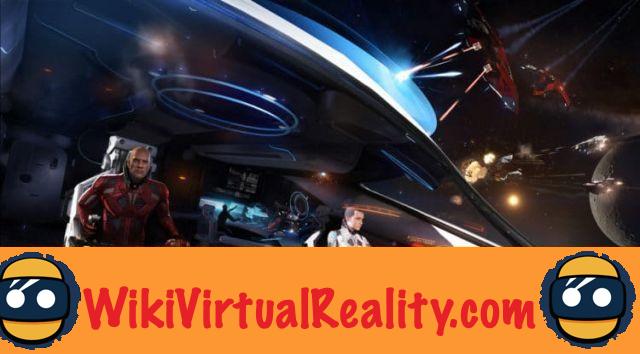 Like all massively multiplayer games, Elite Dangerous VR features a almost infinite lifespan. The quest for intergalactic fame and wealth never really ends. Likewise, explorers at heart will get their money's worth. In September 2017, Frontier Developments revealed that only 14 solar systems have been discovered by gamers since 2014. Of the 400 billion solar systems, this number is only about 0.003941%. So you don't have to worry about taking the train (or the ship) on the move. In addition, additional content is very regularly added over the course of updates.

However, Elite: Dangerous requires a lot of patience. It not a 20 minute arcade game during his lunch break for the pleasure of ducking enemy ships. It takes many hours to discover the different facets of the game, assimilate the mechanics and master the controls. Besides, you will probably spend several hours alone in space before meeting another player. So we can't really talk about a maximum lifespan, but rather a minimum lifespan below which to start playing Elite: Dangerous is not worth it. If you don't have a lot of time to devote to the game, you might as well abstain and prefer Eve Valkyrie for example.


Elite Dangerous VR graphics and soundtrack: stars in your eyes 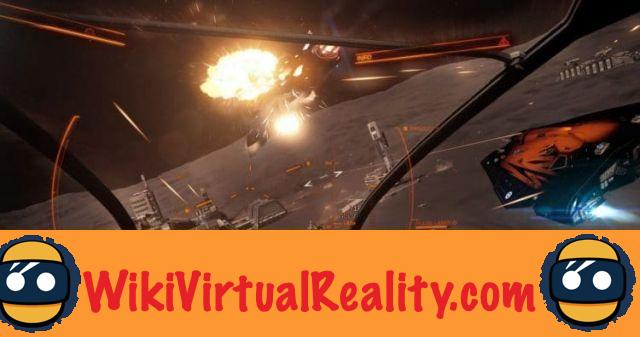 The graphics of Elite: Dangerous are beautiful. Very beautiful. It's a real pleasure for the eyes to contemplate the vastness of the cosmos, to observe the distant stars shining in the distance or to see another player's ship briefly slice the horizon. Here again, realism is essential and the lighting effects are very successful. The same goes for sound effects which strongly contribute to immersion.

However, low definition of VR headset screens is problematic compared to the PC version. In this game, it is sometimes necessary that the gaze carries tens of kilometers. However, over such a distance, the display becomes blurry. The same goes for the textual indications within the cockpit which may lack clarity. We will therefore have to wait for the arrival of a helmet like the Pimax 8K to really take advantage of the graphic potential of Elite Dangerous.

On PC, the primary goal of Elite: Dangerous was to allow gamers to feel the sensations of piloting a spaceship, to live the life of a cosmic explorer. The feeling of immersion was already impressive on a PC screen, but takes on a whole new dimension with a virtual reality headset. Elite: Dangerous seemed naturally suited to VR, so it's no wonder the porting was done even before the Oculus Rift CV1 was released.

From the start of the game, the immersion is bluffing, and you feel like a pilot. Rather than pressing a keyboard shortcut to display a menu, the user should turn your head to consult the interface on the different screens from the cockpit. VR indisputably unleashes the title's immersive potential. Unfortunately, Elite: Dangerous remains a VR adaptation of a PC game, with the limitations that entails.

For example, even with Oculus Touch / Vive Wand motion sensing controllers, the player does not use his hands intuitively to operate the various cockpit buttons and levers. He just presses the buttons on the controllers to interact. We would have preferred interactions similar to those in the Lone Echo game, where the player can actually grab the handles, pull the levers, or press the buttons.

Comfort of Elite Dangerous VR: an intense experience, but comfortable 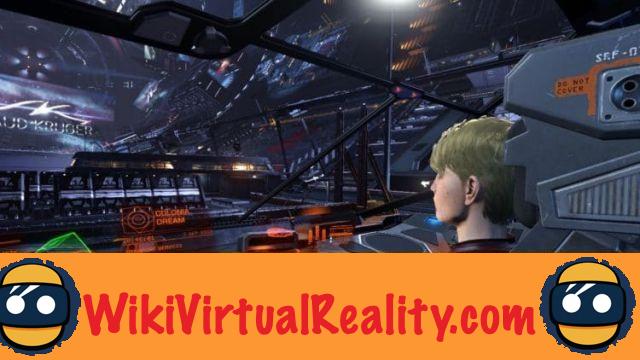 In terms of comfort, Elite Dangerous VR impresses. Even during loops and other aerobatic figures, no feeling of nausea is to be deplored. Likewise, the beautiful graphics protect against possible eye fatigue.

To achieve this result, Frontier Developments had to make some concessions, such as the default removal of some visual effects considered too garish for the eyes in VR. However, the result is up to the task and you will actually feel like you are comfortably seated in your cockpit chair.

Elite: Dangerous VR against the competition

In the space simulator category, Elite: Dangerous VR is the antithesis of EVE Valkyrie. The latter is presented as an arcade-oriented game, leaving the player the pleasure of shooting ships at all costs in epic battles punctuated by explosions and outpourings of color. The game directly plunges the player into the heat of the moment. On the contrary, Elite: Dangerous VR relies on realism and technicality. It is therefore a simulator in the true sense of the term.

In that sense, it is closer to Star Trek Bridge Crew, Ubisoft's multiplayer VR game. However, Star Trek is content to offer players the opportunity to pilot a ship cooperatively to accomplish successions of missions. The range of possibilities offered by Elite: Dangerous is much wider. Trade, exploration, resource mining make this title a game much less "framed" than Ubisoft's space simulator. 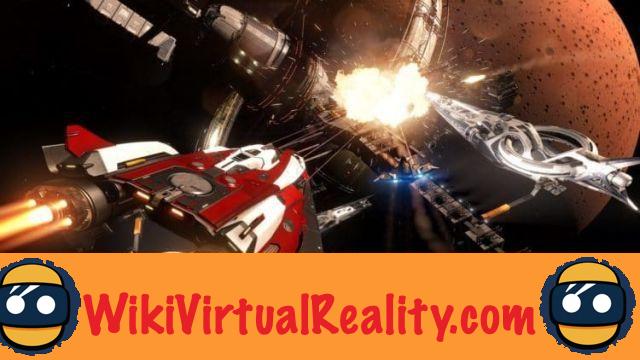 Elite: Dangerous VR isn't perfect, but its depth commands respect. It is a game that unfolds over time, which requires patience and personal investment. If you are looking for a technical space simulator, an open world and extreme freedom of action, this game is for you. On the other hand, if you prefer a game that is edgy, offering fun and pure action without beating around the bush, you may quickly be discouraged by the complexity of this title.

Scenario: A scenario leaving the reins to the community of players.

Lifetime : Almost infinite lifespan provided you take the time to immerse yourself in the game.

Immersion: A very immersive first-person game that will delight fans of science fiction.

add a comment of [TEST] Elite: Dangerous - The most realistic and complete VR space simulator