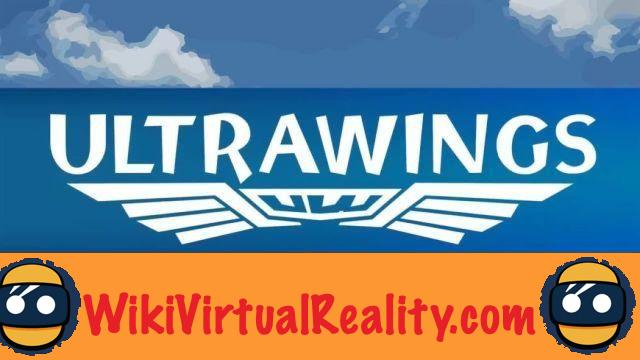 Ultrawings VR storyline: play as a young pilot in a tropical archipelago

In Ultrawings VR, the player plays a young pilot in a tropical archipelago. At the start of the game the player must pass his first flight, to then accomplish different missions. Each completed mission will earn him a little money, which he can then spend by buying airports within the archipelago. The title, however, is clearly arcade oriented, and the scenario does not rely on realism. Thus, you will quickly find yourself bursting balloons throwing darts while piloting your small plane ...

It is possible to play Ultrawings with a controller, but the gameplay is much more interesting using the Oculus Touch or Vive Wands motion-sensing controllers. These controllers allow you to directly use your hands realistically to control the air craft, and greatly enhance the feeling of immersion. Before each take off, the player will have to start the engine by pressing the red button on his left, activate the switch on his right, change gear and finally take off by pulling the stick. Once in the air, the objective is to orient the stick correctly to go in the right direction. The handling is rather sensitive, and the slightest sudden movement will send the device in all directions. Despite everything, the game remains less technical and more accessible than a realistic flight simulator.


After the first flight, which also serves as a tutorial, several types of missions are offered. The For example, the player will have to pass through a series of rings, burst balloons by throwing darts, or even deliver loads by landing in a specific place, while being careful not to tip too much otherwise the package will fall into the sea. Despite a certain variety of missions, we unfortunately quickly have the impression of going in circles, especially as the issue of the missions is not the most exciting. Each mission brings in money, and the money is used to buy airports, but it is absolutely useless ...

Lifespan of Ultrawings VR: a decent lifespan but a little repetitive

La Ultrawings VR's lifespan is very decent, with a number of missions to complete. Unfortunately the repetitiveness and the lack of replayability reduce this lifespan. The impression of going in circles may dissuade the less persevering.

- Ultrawings VR graphics are very "cartoonish", colorful, and clearly do not aim for realism. This aesthetic choice is rather pleasant, but we regret a rather weak technical aspect. The title takes place in a tropical environment, but the sets lack brightness.

However, the high viewing distance allows you to admire the different islands of the archipelago from the heights, which encourages you to take the time to hover in the air for a few moments, the time to contemplate the surroundings. The soundtrack with jazz accents is also very jovial, and the sound effects are also reminiscent of those of a cartoon.

Despite its unrealistic graphics, Ultrawings offers a very good feeling of immersion. The first person view and motion-sensing controllers really make you feel like you're on the plane. In addition, the handling remains technical and therefore pushes the player to give their all to accomplish their mission. When the crash is imminent, the feeling of immersion reaches its climax.

Comfort of Ultrawings VR: a comfortable experience as long as you don't feel dizzy

Like in a real plane, performing loops and other aerobatic figures can quickly make you nauseous. It is therefore necessary to drive smoothly and precisely to enjoy a comfortable experience.

Ultrawings VR does not a priori pose a problem of motion sickness. However, people who experience air sickness or vertigo when boarding a plane in real life will likely encounter the same problem in the game.

Ultrawings VR against the competition

Ultrawings VR is significantly less technical and realistic than more traditional virtual reality flight simulators like Areofly FS 2 or DCS World. Fans of pure and hard simulation will therefore perhaps be disappointed by the arcade side of the title.

However, it is currently the only VR flight simulator compatible with motion sensing controllers, and these controllers increase the feeling of immersion and the realism of piloting. The game therefore has something to appeal to experienced users. Beginners, for their part, will be delighted by the fun and accessible side of the game.

Conclusion of the Ultrawings VR test

If you dream of control a plane in virtual reality but you are not very experienced, Ultrawings VR presents itself as an ideal compromise. Accessible to beginners, but technical enough to appeal to experienced players, this fun title promises a few hours of entertainment for everyone. The maneuverability with motion-sensing controllers offers excellent sensations of immersion. In fact, despite a slightly light lifespan and a lack of variety of missions, the experience remains very pleasant.

Scenario: No scenario, but a unique atmosphere.

Lifetime : An almost unlimited lifespan according to the enthusiasm of each.

Graphics and soundtrack: Very nice graphics for a PSVR game.