Apollo 11: 5 VR experiences to celebrate the 50th anniversary of the 1st step on the moon 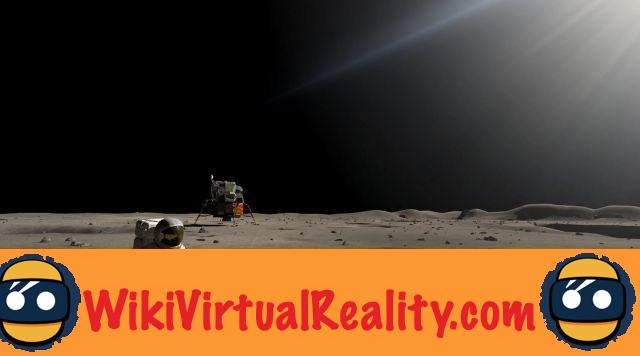 50 years ago, Apollo 11 takes off from Kennedy Space Center to transport Man to the moon for the first time. On July 20, 1969, the rocket landed successfully and Niel Armstrong set foot on the lunar surface by uttering a phrase destined to enter into legend: "a small step for man, but a big step for mankind". To celebrate the anniversary of this historic event, and to relive it as if you were there, we offer 5 virtual reality experiences:

The Apollo 11 VR experience, developed by Immersive VR Education, invites you to relive the first moon landing through the eyes of those who lived it. To do this, the audio and video archives were combined with reconstructions of the rocket and the various locations.

take control of the ship during takeoff, landing and moonwalk. This experience will not only allow you to learn more about the Apollo 11 mission, but also to better understand the difficulties and challenges overcome by the men and women who worked on this program within NASA.

This multiple award-winning VR experience was produced by the BBC. It draws inspiration from NASA's training program and the experiences of its astronauts.

More than 400 kilometers above planet Earth, live a journey full of emotions, beautiful images and unforgettable moments. An experience to live if space fascinates you ...

Written and directed by Eliza McNitt, produced by Darren Aronofsky and Ari Handel, SPHERES is an interactive virtual reality film broken down into three chapters.

The experience invites you to discover and listen for the first time to the music and sounds produced by the universe… A beautiful project, acclaimed at the Sundance Festival and winner of the Grand Prize in the VR category at the Venice Film Festival.

Embark aboard the International Space Station and discover life aboard the station in the Mission: ISS experience developed by Magnopus and nominated for the Emmy Awards.

Using the help of Touch controllers, you will have to learn to move and work in zero gravity conditions. NASA astronauts will guide you through the station through archival videos ...

After this return to the nostalgic past, why not turn to the present of the conquest of space? On the VR Bigscreen application, you can attend the SpaceX Dragon space freighter launch live. The launch is scheduled for July 21, 2019 at 2:35 am French time.

As a reminder, the platform Bigscreen allows you to meet in VR with other users to view any type of content on a giant screen. Since a recent update, the application offers more than 50 free TV channels in livestreaming.

add a comment of Apollo 11: 5 VR experiences to celebrate the 50th anniversary of the 1st step on the moon