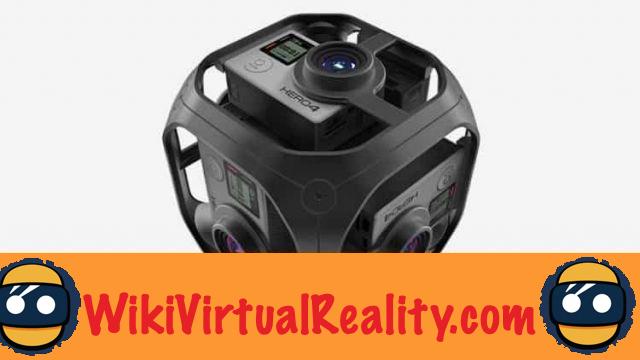 You should know that the Omni 360 is the most balanced evolution level technology / price of the GoPro and Jump VR monster project, the Odyssey project. This particular camera consisting of 16 cameras for a colossal price of 15 000 $, which is to say that this camera is made for professionals with a heavy stock market. Besides, this somewhat irrelevant project is sold in a limited number and serves more as a prototype than a real product for commerce.

Thus, its little sister, Omni 360 offers fewer cameras, the cube-shaped 360 camera offers six GoPro Hero4 Black having a value of 500 € each, all this gathered in a spherical matrix. The camera is also accompanied by software, Kolor's Autopano Video stitching software, which allows the videos of the six cameras to be stitched together to obtain the famous 360 ° rendering. And the result is rather convincing since the assembly of these six videos offers a final 360 ° video that can reach 8K resolution. Not bad.

The Omni 360 can be left on for 3 hours thanks to its battery, a Switronix Hypercore98S battery. In addition, the camera is sold with a remote control can control the Omni from a distance, up to 180 meters, a 32 GB microSD card is also supplied with the device, with in addition its 6 other microSD ports and its 7 USB connectors. It is a bit of a shame that at this price GoPro does not also provide the small tripod for the camera that will have to be purchased separately.

So this little gem of technology will be offered to the general public August 17th, for a fairly substantial price of 5 399,99 € ! Note that the camera costs $ 5 for the American continent… You should also know that the camera can be purchased without the 6 GoPro Hero4 Black, for € 1.


The Omni has some interesting features, but it is true that this GoPro 360 camera is particularly expensive, especially when it comes to a major black point that virtual reality aficionados will unfortunately regret, Omni 360 does not film in real relief. A black point that can easily make you turn your head towards another device.