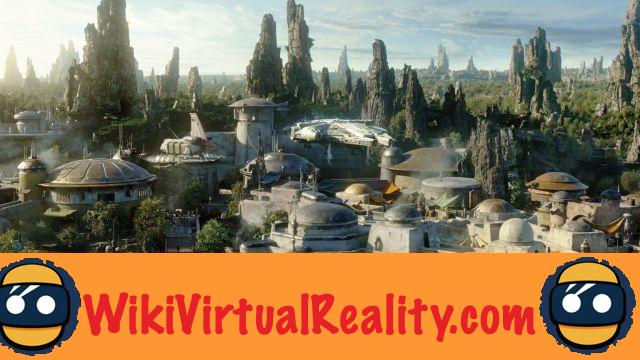 In April 2017, Disney unveiled its ambitious Star Wars theme park project: Galaxy's Edge. A park directly inspired by the world of Star Wars, at the cutting edge of technology, in which visitors will be actors of an interactive adventure full of twists and turns.

Two years later, as part of the Star Wars Celebration in Chicago, at the same time as the trailer for Star Wars IX and that of the VR film Vader Immortal, Disney has just revealed more details on this project. The entertainment giant notably presented a mobile application allowing visitors to indulge in an augmented reality multiplayer game within the park.

entitled ” Play Disney Parks “, this application is actually already available on iOS and Android. For now, it mainly allows users to wait while queuing at Disney park attractions thanks to gamification mechanisms such as virtual rewards to be collected or levels to be won. Thus, while browsing the park, the player progresses and evolves in the game over the day.

However, within the Galaxy's Edge, this application will take on a whole new scale. According to Asa Kalama, creative director of Walt Disney Imagineering, visitors will be able to use Play Disney Parks to "hack", "scan", "translate" and "fix" certain places in the park. It will be for example connect with droids and other physical elements scattered all over the place in order to discover more elements on the script.

These interactions will allow visitors to take control of the different elements of the park in the name of the Resistance or the First Order, depending on the faction they choose when entering. At the end of a certain period, the faction that controls the most resources wins the game and the game is reset.

Visitors will therefore engage throughout the day in a real war in augmented reality. The gameplay seems directly inspired by games like Ingress Prime or Pokémon Go from Niantic, but it must be recognized that this concept lends itself particularly well to the universe of Star Wars.

As a reminder, the first Star Wars: Galaxy's Edge park will open in Anaheim, California on May 31, 2019. A second park will welcome visitors in Orlando, Florida on August 29, 2019. In 2024, a Star Wars park will also be incorporated into Disneyland Paris, in France, but it is not yet known whether it will take over all the content and attractions of its American elders ...

The revolution is underway for the Oculus! ❯

add a comment of Star Wars: Disney unveils an augmented reality game for its future park